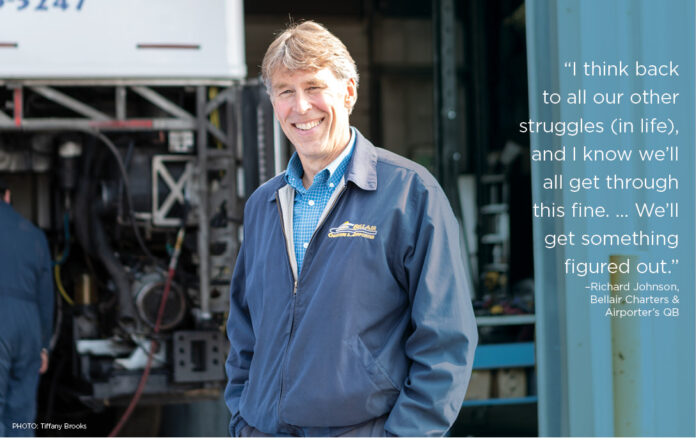 “Employee.” That’s a term that has vanished almost entirely from the vocabulary (and payroll) of Johnson’s business over the course of the past several months.

The business is buses, chartered, shuttled and leased. The Bellair Charters & Airporter buses — nearly all 70 of them — stand idle, a virtually motionless fleet on sprawling lots near Ferndale, in Federal Way and in Yakima.

Johnson bought the business 15 years ago after several years at Bellair as — what’s that term again? — oh, yes, an employee. The company flourished. It’s been a consistent presence in the annual Business Pulse listing of the Top 100 Private Companies. But then, like so many others, it screeched to a halt in its tire tracks between spring and fall this year.

“Our entire industry, worldwide — the huge travel and tourism segment of economies — got hammered,” Johnson said.

For perspective, Bellair had been showing growth, posting more than $11 million in revenue during the 2019 fiscal year and boasting about 150 employees. But in the third quarter of 2020, Johnson revealed a drop of roughly 85% in sales in Ferndale, with a skeleton staff of just three or four in the office, six drivers, a few mechanics and another dozen people working in other locations.

“We’re very thankful for our contracts,” Johnson said. “It’s a low-margin segment, but high volume so it provides a wonderful cash flow.”

Bellair has contracts with the U.S. Navy, state and intercity bus operations, and construction companies moving their employees from job to job.

Otherwise, Bellair business has bottomed out. Throughout the pandemic, many stories have circulated about companies that have reworked their business models, adjusting to survive the crisis. But at its core and within its niche, Bellair has found itself with nowhere to pivot. You either need a ride to the airport or you don’t.

With COVID-19 restrictions, tours, charters and Airporter Shuttle trips completely shut down. (The shuttle has since resumed, starting in June with limited capacity and a drastically shortened schedule, and slowly has regained 15% to 20% of the customer base.)

However, one exception to the bleak current events and uncertain forecast did unfold.

“We asked ourselves, ‘What assets do we have?’” Johnson said. “Good facilities and great mechanics. We opened a shop for maintenance and repair on motor homes, RVs, and for companies with fleets. It’s been slow, but sure. But the best part is that it provided some outside work for some of our mechanics.”

This crisis wasn’t Johnson’s first with Bellair. Five years ago, one of the company’s chartered tour buses based in Federal Way was slammed into head-on by another tour vehicle while crossing a bridge in Seattle.

Five passengers on Bellair’s bus — among a group of students and faculty from North Seattle College — died, and dozens sustained injuries. Bellair never was charged or found at fault in any way, but Johnson had to meet the moment with victims’ families and with his badly shaken driver and workforce.

“Devastated and heartbroken,” is how he described the aftermath at the time. “It is so sad for the families involved. We needed prayer.”

During that dilemma, the company and its buses kept running. Now, nobody can predict when they will run normally again.

“The picture is going to look entirely different,” Johnson said. “It’ll be quite tough to rebuild to what we once had.”

Yet he holds to a positive outlook and proactive approach.

“We’ll rebuild the infrastructure and hire; we’ll do it. It’s just that nobody knows the timing of it.”

That optimism is a noticeable trait of Johnson’s. During our hour-long virtual conversation, he smiled almost constantly despite describing a grim business situation.

“There’s always something to be thankful for,” he interjected into the conversation at one point. That brought to mind the late author/psychotherapist Alan Loy McGinnis, who wrote in his 1993 book The Power of Optimism, “Optimists are cheerful even when they can’t be happy.”

Johnson attributes that presence to his faith. “An accountant that used to work for us told me, ‘This (pandemic shutdown) must be why the Lord gave you so much success earlier, so you’re able to handle this,’” he said.

In line with that, Johnson also spoke of becoming proudly American after an upbringing in Canada. He graduated with an undergrad degree in marketing and an MBA at Western University in London, Ontario. He moved to Minnesota 29 years ago and eventually came here. Seven years ago, he became a U.S. citizen.

“That was an extraordinary process,” he said. “I have socks with U.S. flags on them.”

The U.S. model for economics, finance and business was one of the strongest appeals to him in becoming an American. He worked in finance roles before anchoring at Bellair with his wife, Julie, a North Dakotan, and two preschool-aged children, Justine and Will.

The topic of business methods turned Johnson’s conversation away from despair and toward solutions.

“This needs to change now,” he said. “We have to get the economy moving, not losing more and more revenue with mandates. The financial devastation to families and uncertainty is a huge economic risk.”

He acknowledged that the strong — albeit paralyzing — response across the U.S. was necessary because of the unknowns about the new coronavirus.

“With so many deaths and the possible problems with hospital services, out of the gates the mandates and shutdown were warranted,” he said.

“But now we have plenty of science and knowledge to work with in flattening the curve. The strategy needs to balance the minimizing of health risks against the harm to the economy and the financial loss and mental health of so many individuals. Stats show that the overall harm in these areas is far worse than the overall health risk.”

In other words: more science, less politics. Johnson didn’t wade heavy-handedly or deeply into the latter; he understands that it’s risky — with a high probability of futility — for business owners to flout governments.

“It’s just that everyone’s risk is not the same,” he said, “so the solutions can’t be treating all of us the same.”

Nor will the eventual outcome return us to sameness, Johnson theorized.

“We get used to painting a picture of what we’ve always had….we’ll have to get used to seeing a new picture now.”

After a recent Seattle Seahawks victory in which the football team came from behind with 15 seconds left the game, quarterback Russell Wilson described a constant sideline message among teammates: “Keep believing, just keep believing.”

It could be said that Richard Johnson is the Russell Wilson of Bellair Charters & Airporter. The company’s quarterback ended our wide-ranging conversation this way: “I think back to all our other struggles (in life), and I know we’ll all get through this fine. I have confidence that the Lord is involved and we’ll get something figured out.”