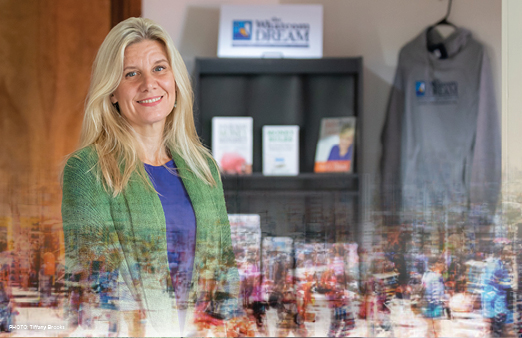 After escaping generational poverty, The Whatcom Dream executive director helps others do the same

The Whatcom Dream helps people hone financial literacy skills, educates the community about poverty-related issues and gives a hand up to individuals who struggle to survive on limited incomes.

“The Whatcom Dream is so much more than financial literacy,” Executive Director Trudy Shuravloff said. “It gives you understanding of people who grew up different from you.”

The nonprofit organization started out with a single financial literacy class held in the laundry room of a low-income Bellingham apartment complex back in 1999, she said. The instructors were people from the community — professionals, middle class, some who’d grown up in poverty. All shared a common objective to give people tools to forge better lives for themselves.

In the culture of generational poverty, she said, people grow up convinced that operating in survival mode is the norm. Lives are lived in the tyranny of the moment.

This reality “makes it very hard to plan into the future,” Shuravloff said, “because there is always a crisis at hand.”

The Whatcom Dream has expanded beyond those humble beginnings in a laundry room, moving in Feb. 2020 to 1846 Iron St. in Bellingham.

The COVID-19 crisis has forced changes in how classes are held. Instead of meeting in person for each eight-week course, people now attend virtually.

The next financial literacy classes are scheduled to start in January. These classes include sessions geared specifically at teenagers, older adults and Spanish speakers. Private classes also are available. Sessions for older adults highlight such topics such as Medicare Supplement program choices, identity theft and living on a fixed income.

The $20 class fees — currently being waived due to the pandemic — normally are placed into a scholarship fund to help others attend future classes. This allows participants a way of paying forward the help they’ve received, Shuravloff said.

Shuravloff said the topic of family of origin money beliefs and ideas is rarely discussed. People talk about cultural differences and differences between ethnic groups, she said, but not about differences due to socioeconomic levels.

People raised in generational poverty don’t always know how to propel themselves out of that mode, she said. They might get hired for a job that allows them to earn what a middle-class person does. But do they understand the company’s expectations for workers? Something like being five or 10 minutes late to work might not seem a big deal for people who grew up poor, Shuravloff said. However, in middle-class culture, being late to work is considered non-negotiable. Failure to understand that rule could get the new worker fired for not adhering to company expectations.

“We teach those different socioeconomic classes to learn from each other,” she said.

Learning how people from lower socioeconomic levels view life can be eye-opening, Shuravloff says. To better be able to help people attending the classes, volunteers at The Whatcom Dream are taught how people in poverty think and what the cultural values are.

People from lower socioeconomic backgrounds might be more casual in sharing personal details about themselves. Helping family when they need help often is a top value, Shuravloff said, and this can result in aspiring college students turning down scholarships in order to stay home and help family.

People from middle-class backgrounds, on the other hand, may be more sparing in what information they divulge to fellow workers, friends and neighbors, Shuravloff said. Their focus is often primarily on achievement — on fulfilling such goals as ensuring that each of their children earn a four-year degree and go on to a professional job.

In the financial literacy classes, participants are asked to write a five-year plan for themselves. Shuravloff said that when she took the class, she had no idea what might be happening in her life in the next 12 months, let alone in five years.

“My dream was to graduate from Western Washington University with a four-year degree and buy a home,” she said. “Now, that was very ambitious, but I did it.”

Moving those dreams from paper to reality required tools, hours of planning and learning to overlay her childhood vision of life with a broader understanding.

The Whatcom Dream is called that because people have their own dreams, Shuravloff said. People who want to own a home, for example, are asked how they are going to accomplish that goal and what they need to do.

“We help them build a strategy with their finances,” she said, “so the dream comes true.”

Private coaching is geared at people who are already financially literate but have a particular issue they want to focus on. Poverty simulation events allow participants to experience the realities of a low-income family forced to meet basic needs with little income.

The nonprofit organization is supported by grants and donations from local businesses, larger companies, individual donors and volunteers. Support is offered in partnership with such area agencies and institutions as Goodwill Industries, Bellingham Technical College, Head Start and Lighthouse Mission Ministries.

The staff includes Shuravloff — who confessed she never expected to find herself occupying the executive director’s chair — along with administrative staff and four class facilitators.

“If we take an attitude of curiosity … instead of judgement, each of us will have a better understanding of our fellow human beings, and this will build communities,” Shuravloff said.

For more information about The Whatcom Dream, call 360-306-8324, visit www.thewhatcomdream.org or find the organization on Facebook.

Is Your Business Responsible For Collecting Sales Tax In Other States?