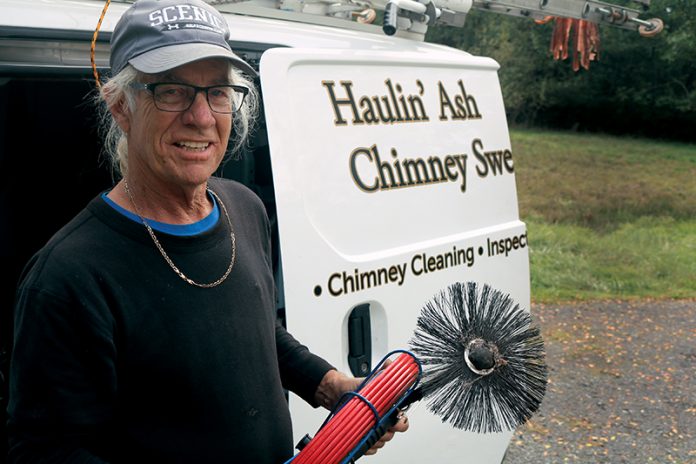 Bob Hand’s work throughout Whatcom and Skagit Counties suits Santa. Rather, it un-soots Santa. Bob is a chimney sweep.

Approaching the holiday season, his company—Haulin’ Ash—was managing up to 40 calls a day (he’s the only game in town). During the seven-week run-up to Christmas Day, Hand will clean in the neighborhood of 400-500 chimneys.

And, in essence, thereby will circumnavigate fire, smoke, and soot and/or creosote damage that creates safety hazards.

Some calls might come for something else—a hearth, a stove, et al. Forty years of service calls, and reams of certifications, and tons of ashes have led him across a broad range of dwellings, new-home construction, and commercial applications.

All the work evolves from two cocoons at the core of the company’s mission statement—education and safety.

Handholds a degree in geology from Denison University. What’s the link between geology and sweeping soot and creosote? “None,” he said, pausing between tasks of inspecting and sweeping a chimney rising from a wood-burning stove at a residence.

“I was a single father wanting to own something where I could take care of a young son (age 8) and a business at the same time. So I bought this company.”

Experience at the time? “None.”

Well, a little bit, he ‘fessed up. “I worked for a friend who knew the basics of chimney repair and maintenance.” When the opportunity arose, Bob leaped in, and he’s been Haulin’ Ash ever since. “I’ve taken certified chimney-sweep classes for 30 years….I know a lot about this stuff.”

Back story: Hand grew up in Saginaw, Michigan. A visit to the Great Northwest hooked him and he moved to Bellingham. (“Saginaw, I read recently, is number four on the list of cities that people leave….”) His daughter, Diana, books appointments and manages her father’s schedule. He’s constantly on the move, six days a week, all over the local map.

Hand hauls ash on an average of 12 service calls a day. He works only with a young apprentice (Zack, now with three years’ experience), arriving in a van topped by extra-long ladders and stocked with tools—including the all-important viper, imported from Germany, that snakes down the chimney.

Educating his customers is as important to Bob as fixing or preventing their problems. At the top of his you-must-know-this list:

Take no shortcuts. “You want correct installation that meets all the safety standards and building codes.

With chimney inspection thrown in at no cost, Hand identifies any threat to structural damage, advises on recommended fixes (e.g., replacing aluminum caps, crowns, etc., with stainless steel, because extreme heat or fire melts aluminum), and he shoots photos and takes notes for use with repeat customers.

Then there’s the matter of the sweep’s biggest ally, the jolly one who drops down chimneys with regularity once a year. “I tell children how Santa comes and, on the roof, he takes a pill that shrinks him so he can fit down the chimney,” Bob said with a wide smile. “And how he delivers the toys, then goes back up to the roof and takes another pill that puffs him up for the next house.”

When Santa makes his rounds hereabouts, he’ll find a plethora of clean chimneys to drop into. And Bellingham can boast that it had a Hand in it.