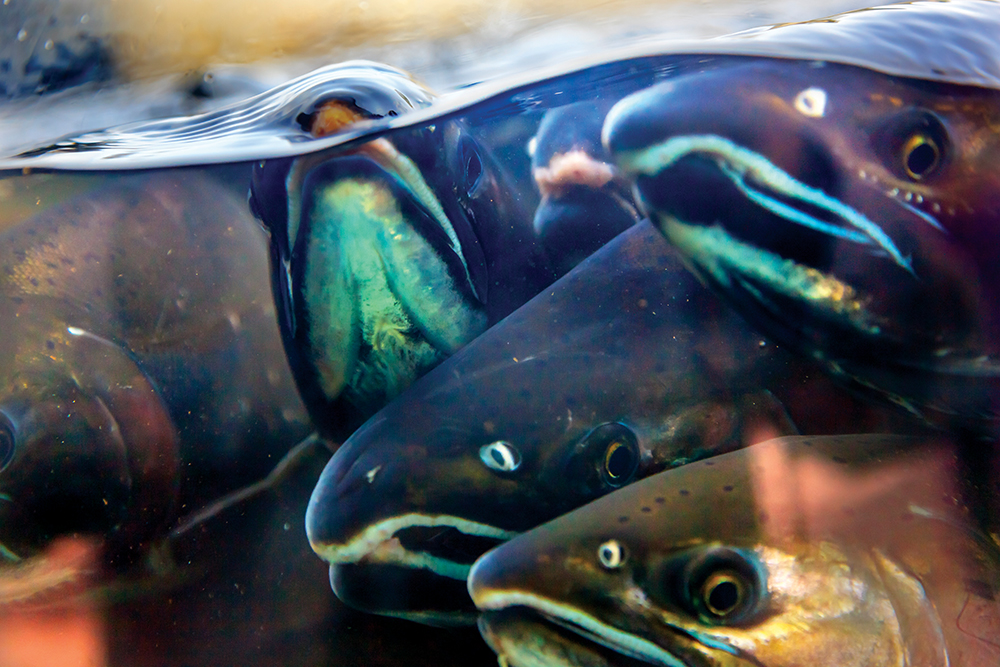 A proposal to launch a Bellingham fish hatchery modeled after a program in Alaska could give a big boost to the salmon population in the San Juan Islands, but the Washington Legislature and local fishing tribes represent two big hurdles.

A broad coalition formed the San Juan AREA Sea Life (SJASL), a 501(c)(3) nonprofit organization, in Bellingham to bring salmon back to healthy 1985 levels in Marine Area 7 (San Juan Islands), according to Doug Thomas. He is President and CEO of Bellingham Cold Storage and a member of the organization.

“The SJASL has been researching the Alaskan Salmon Hatchery model, as demonstrated by the Douglas Island Pink and Chum (DIPAC) Hatchery in Juneau.” Thomas said. “We’ve been studying their operations, methods, and best practices for more than three years.”

The DIPAC hatchery started in 1976 and today is one of the most successful salmon hatcheries in the world, producing more than 138 million salmon fingerlings for release each year, according to the SJASL.

Thomas said the Alaskan model is different from state-run fish hatcheries in Washington in one key aspect: The DIPAC hatchery is a private, nonprofit organization. Its independent board of directors is composed of up to 23 stakeholder groups who have the goal of producing healthy populations of salmon within the area they serve.

Like in Alaska, the Bellingham hatchery initially would be funded through a state-government-loan to provide the upfront money needed to complete a feasibility study. The study would cover all of the project’s impacts on the environment, existing native stocks, brood-stock selection, water quality, facility design and permitting, staffing, operating-budget forecasting, the development of a business plan, and long-term financial-feasibility modeling.

This loan would be provided to the project on a low- or no-interest basis for the first 10 years of the project, while the volume of salmon grows each year to a point where the revenues from the hatchery are large enough to begin supporting the recovery of both the capital and operating costs associated with running the hatchery on a year-round basis.

Up to 30% of each year’s fishery is allowed to go towards cost recovery, which would cover all operating and capital costs in 10-12 years, Thomas said. The time will be less than in Alaska because their hatchery people are gladly sharing information about what has worked for them and what hasn’t, he added.

The Bellingham hatchery, likely at the mouth of Whatcom Creek, would follow the Juneau model by splitting the salmon to be released into a small number of remote-site releases, where freshwater streams come out to the sea, Thomas said. This process helps the fish have a higher survival rate because it spreads the release over a much wider area and makes it harder for predators to simply feed at the entrance to the hatchery, both when released and upon their return.

“This methodology also allows us to spread out the sports and commercial fishing fleets around the entire Marine Area 7, rather than being heavily concentrated in one spot, where overfishing can occur,” Thomas said. “And it’s ideal for making the king salmon available for the Orca (whales), who should be able to roam throughout the San Juan Islands and, likewise, not be attracted to a single release site.”

State Rep. Luanne Van Werven (R-Lynden) and Thomas were in a group that toured the Juneau hatchery last year. “Assuming a conservative 1% survival means 1.37 million DIPAC salmon return to their homes,” Van Werven wrote in an op-ed published in August by The Seattle Times.

“The DIPAC hatchery covers all operating costs by selling 30% of each year’s returning fish. That means the remainder—a whopping 950,000 fish—are available annually for commercial, sport, and tribal uses. They also are available to killer whales, eagles, bears, and all salmon-consuming denizens of Alaska. Those are extra salmon available on top of the natural populations, and this isn’t the only such hatchery,” she wrote.

A new Bellingham hatchery, based on the DIPAC hatchery model, also would help the Southern-Resident Orca Whales, Thomas said. “The project would produce several million king/chinook salmon, which is the preferred food stock for these whales,” he added. “Bringing these salmon back to Marine Area 7 would provide ample salmon stocks to maintain a healthy habitat for the whale population to once again thrive in the San Juan Islands.”

Van Werven and the SJASL will be seeking approximately $2.5 million for the feasibility study during the 2020 legislative session. If given the go-ahead after the study, the capital cost of the Bellingham hatchery is estimated at $45 million.

While the Alaskan model eventually pays for itself, the SJASL pointed out that Washington state currently spends $115 million a year on operating its 40 state-run hatcheries. Van Werven noted other benefits of the Juneau hatchery model.

“The DIPAC hatchery has excellent relations with its Native American neighbors and functions as an outstanding learning center for visiting school kids and surrounding communities,” she said. “It also serves as a local center of tourism and generates tax dollars from visiting tourists from around the world.”

However, the proposal faces an uncertain future in the Washington Legislature, particularly if it’s not supported by fishing tribes who want to pursue other ways of increasing the salmon population. And the tribes haven’t indicated whether they will support the SJASL hatchery plan.

“We recommend no changes to the Boldt decision or that any of the current stakeholders receive a smaller or greater stake in the fisheries that would result from this plan.” Thomas said. “Currently the fisheries are split on a 50/50 basis between tribal and non-tribal.  We will be recommending that this practice continue without modification.”

On Oct. 11, the Lummi and Yakama nations called for removing the Bonneville, The Dalles, and the John Day dams on the Columbia River to help restore salmon runs. Jay Julius, Chairman of the Lummi Nation, and JoDe Goudy, Chairman of the Yakama Nation, said removal of the dams is the only hope for saving the salmon runs their people depend upon and restoring the health of the endangered Southern-Resident Orca, according to The Seattle Times article.

“Whether defeating coal ports, opposing increased vessel traffic on the Salish Sea, repairing culverts, or removing invasive Atlantic salmon, (we seek) to leave to future generations a lifeway promised to our ancestors 164 years ago,” Julius said.