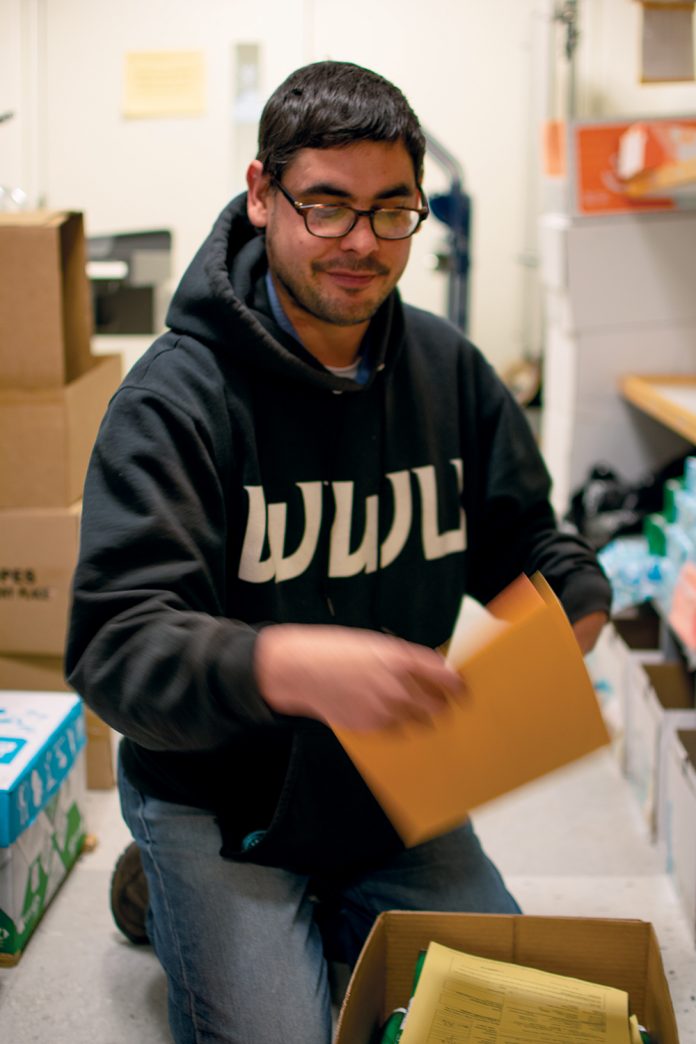 Many local companies and nonprofits hire individuals with a developmental disability. And the benefits are many on both sides—the employer and the employee.

“You get a good employee, that’s the main benefit,” said Matt Carlson, Executive Director of Kulshan Supported Employment (KSE). It is a nonprofit that provides vocational services to adults with developmental disabilities that can include Down Syndrome, autism, cerebral palsy, fetal alcohol syndrome, childhood brain injury, and more among their candidates for hire. KSE helps their clients find and maintain meaningful employment.

The Whatcom County Health Department estimates there are about 2,500 individuals in the region with developmental disabilities, though the department has no record of how many of those are seeking employment. Nationally about 85% are unemployed, 54% have Social Security as their only income, and 82% of their families say that economic security is challenged among people with developmental disabilities. (Sources: The Arc of the United States, and Washington State Apple Health.)

KSE exists to bring together local adults seeking jobs with employers who need workers. “We help our clients by learning their strengths, and matching that to job openings or carved-out positions, which is a portion of a job description,” said Nicole Mathey, Program Manager at KSE. “We do specific job development when we have someone in mind, and talk to people to see if there’s a match.”

Tasks include handling office materials, working on production lines, performing janitorial services, and more. The public, according to KSE and the Health Department, is used to interacting with employees with developmental disabilities in local grocery stores and restaurants.

Michelle Karaffa, a board member of The Arc of Whatcom County, said that many of those employed locally receive support from job coaches who go with the employee, especially initially, and help them become acclimated. Generally, Medicaid funds the support services. “It makes it easier for employers interested in hiring people with developmental disabilities because they know there will be financial support,” Karaffa said.

She has first-hand experience with her son, Austin. “With the backing of KSE, this past summer Austin was hired by the Haggen store on Meridian Street as a member of the bakery department team,” Michelle shared. “For many people with autism, like Austin, employment positions with routine responsibilities are optimal.”

She said that his position has been a perfect blend of consistent job tasks combined with skills he learned in the Bellingham Technical College pastry arts program. “Most days,” Michelle said, “Austin arrives home with a flour-dusted apron, a sweaty brow, and a smile as he lists off the jobs that he completed that day.”

Executive Director Carlson said KSE pre-screens its clients. “We know our clientele pretty well. We talk to the employer and find out what they want; there’s no wasted time for employers,” he said. “And our clientele are excited to work, and dependable. They are long-term employees. If we do a good job learning what our client’s interests and abilities are, there are quite a few things they could do. As we figure out what employers need, different industries could open up. A lot of our clients, like anyone, can do different things.”

He offered high praise for the companies and nonprofits that KSE works with. “We have some champion employers in this community,” Carlson said. “They’re not hesitant to hire and place people in positions where they can reach their full potential. It’s exciting to see clients thriving at work.” And he said he sees a lot of that.

In a way, that’s what brought him to KSE. In 1989, Carlson was a college student in Bellingham with a part-time job at a rental store. One of his co-workers there had a developmental disability. “She was the only employee who was happy the whole time,” he said. “She came in, did her job, and did it well.”

Carlson eventually left that rental-store job, went to work for KSE, and was asked to stay on after getting his degree in chemistry education. He was named Executive Director in 1997. “I was going to be a teacher, and that’s what I like about supported employment,” he said. “It’s long-term. We can build relationships. There’s value in what we do. It’s something I can believe in.”

Funding for nonprofits such as KSE first became available in the late ’80s. The idea was to promote supported employment within the larger community, rather than just in sheltered workshops. KSE’s funding from federal and state sources is administered by Whatcom County. The County pays KSE on average $425 monthly for each client. KSE logs the hours spent on each client and receives payment by the hour, with caps on the billable amount.

Once an employee is trained, on the job, and communication between employee and employer is good, the KSE job coach backs off, Carlson said. “We try for 90% client independence, and check in 10% of the time. The goal is for the employer to be the supervisor, and for the client to see the employer as his boss.”

From there, he said, “We help with little things so they don’t become big. An example is helping a client understand why his regular shift might have to change, due to delivery-truck timing or something similar. “Sometimes our clients just need 15 minutes of explanation, and with that, they accept.”

In the process described by Carlson, a job coach not only helps a client know what to expect and how to interact, but helps the employer interact effectively, too. That could mean providing a picture list of steps involved in the task, or a written list rather than just verbal instructions. “As job coaches, we figure out what an employer needs so our client can be a good employee, and the employer can get results,” Carlson said.

Michelle Karaffa cited an example in her son Austin’s case: Early in his employment, the bakery department supervisors recognized that creating a written list of daily jobs would help Austin become a more independent and productive worker.  “The bakery department team and store management continue to be in his corner,” she said. “When asked what he enjoys most about working at Haggen, he will tell you, ‘Contributing to the team.’”

KSE also communicates with its clients’ advocates outside of the job: family, care provider, or counselor. “Problem-solving goes along with helping that person become successful,” KSE Program Manager Mathey said.

“It’s awesome for that person to use their paycheck to have more financial freedom. They can afford a nicer place to live. They pay back into the taxing system that supports this. Those are all great benefits of seeing someone be successful in a job.”

That success is derived from a simple concept, summed up by Carlson: “You’re looking at the person, not the disability.”