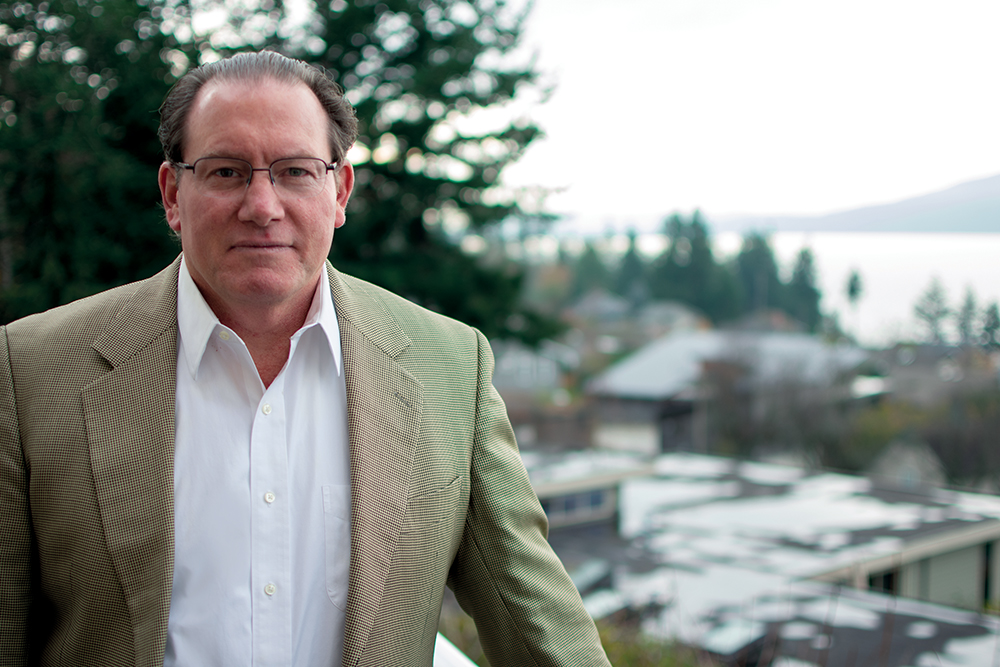 TV business networks rely on insights from tech fund guru and business professor Paul Meeks, so we went to him, too. Here’s your look through a window into his 2019 economy projections, and he shows you flashing caution lights like tax-blowback and interest-rate repercussions. ‘Robbing Peter in ’19 to pay Paul in ’18….’

Paul Meeks, a chartered financial advisor (CFA), manages a portfolio for a wireless communications fund (WIREX) and separately managed accounts for the fund Independent Solutions Wealth Management. The question put to him on a recent day in Fairhaven—where he works from home (when he isn’t in the classroom at Western Washington University as an instructor of accounting and finance in the College of Business and Economics)—was whether the economy, both nationally and locally, will continue to be strong in 2019?

Translation: The overall economy will continue to look good and healthy, though it won’t keep growing at the same pace, if at all.

Many economic indicators in 2018 from the key areas of unemployment, wage earnings, job creation, retail sales, and the stock markets, painted a rosy, even robust picture of the nation’s economy heading into this year. Brace yourself: Meeks foresees a slowdown. But nothing remotely close to the recession tailspin of 2008. Join us in a conversation to find out why….

Paul invited me to meet up at a nearby Starbucks. Over a latte and a London fog, we talked about the ins and outs of the economy, both big picture and the Whatcom window. Just hours before our meeting, I watched him on business network CNBC’s “Squawk Alley” in a discussion about tech-market investments.

A few days later, Paul reappeared there again, and then again a few days after that. He’s been making national TV appearances for many years as he has practiced his trade in several states before coming to Bellingham in 2012 (with Saturna Capital before going on his own). Others inviting his expertise include Bloomberg TV and radio, CNN and CNNfn, PBS, and Fox Business News; he appears from a set at the WWU Digital Media Center. Also, Paul has spoken to audiences as large as 2,000 in business forums, and in 2017 he made a TED Talk at WWU titled “Debunking Stock Investment Myths” (archived on YouTube).

Our topics ranged far and wide, beginning with the tech-effect of Seattle.

“In the Seattle metro area, the dollar-for-dollar share of the economy is huge because of the two Goliaths—Amazon and Microsoft,” Meeks said. “And other significant tech players—like Apple, Facebook, Netflix, Google—are bringing lots of employees there from California and creating Silicon Valley Northwest. We could benefit from it.”

Paul also noted the pending whopper of a merger between T-Mobile and Sprint. “T-Mobile has announced plans to spend $160 million to expand and rehab their facilities in Bellevue. To bring a major telecom to this neighborhood is a huge kick-starter.”

Meeks’s latest entrepreneurial venture, the Wireless Fund (WIREX), based in San Diego, specializes in tech stocks. Managed assets currently are valued at $5 million. When that doubles, he becomes a 50% owner. Eventually, he plans to take it over completely. “I’m excited about seeing it succeed and then running it from Bellingham,” he said.

“The beauty of it is that, in this Internet world, I’ll never have to go to San Diego unless I want to. All of these tech companies are out of New York and just platforms and commoditized entities, regardless of who you are. Merrill Lynch, Morgan Stanley, same thing. Anything you hear about a ‘secret sauce’ is just b-s.”

Paul then turned to the big picture of business confidence and projections for this year, including in Whatcom County. “One thing to realize about the economy where we live is that it’s driven by small-to-mid-sized industrial companies. Metal benders. That, and academia,” he said.

Economists divide their analyses into 11 economic sectors. “Around here, we’re kind of focusing on two sectors—industrials and academia,” Meeks said. “You have to be careful extrapolating. We’re not a good indicator of what’s going on nationally.”

Paul identified the biggest factor in economic projections this year as the Federal Reserve and interest rates. “Over the last seven years, we’ve enjoyed very low-interest rates,” he said. “Now that we’ve recovered from the recession of ‘08, interest rates are rising. Low rates give the economy a boost, but now that we’re far enough away from the financial crisis, we’re going from a tailwind to a headwind. We call that monetary policy, and it’s controlled by the Fed bank. That signals caution for 2019.”

Another major factor affecting the coming year is the impact of tax codes. Paul said to always keep in mind that politicians in Congress and the President control fiscal policy. “The tax code changed around Christmas of ’17, and the big benefits of that were felt in ’18. In ’19, it has to slow because the big-growth vehicles have either exhausted themselves or gone away.

“It’s not another recession,” he said, “but economic growth will slow down. Rather than the 3-4% growth of last year’s economy, it now will become about half that.”

Cautious optimism is a favorite term used by many business leaders when addressing their outlook on any given new year. Meeks was no different: “I feel cautiously optimistic this year. That is, I’m not depressed about the outlook, but it’ll be a slowdown. Instead of going 12-0, we’ll go 9-3.”

[He also used a football analogy on one of his CNBC guest appearances in December, a hint of his past. Meeks played football and lacrosse at Williams College in Massachusetts.]

Our conversation then navigated toward the more narrow view of Whatcom County, and how Paul’s tech-world view plays into it. “The county has to do a better job of diversifying away from academia,” he asserted, ironically, for one who’s taught courses at the College of Charleston and The Citadel when he was working in South Carolina and now teaches at WWU. He’s referring, of course, to WWU, Whatcom Community College, and Bellingham Technical College, which represent a predominant sector of county employment.

The tech sector drives the economy in both Vancouver, B.C., and Seattle, Paul pointed out. “And we have a great opportunity to capture some market share, because both of those cities are very expensive to live in. Somebody else is going to become an exciting tech community along the I-5 corridor, so why can’t it be us and not Mount Vernon, or Anacortes, or Everett? We definitely have a chance for greater growth as techies travel north or south to us. Hey, give me 100 engineers and bring them to Bellingham, where they can enjoy a nice life and an easy commute.”

Any evaluation of the local economy inevitably draws attention to cross-border considerations. Paul pointed to currency fluctuation as a prime influencer. “Since we’re the largest and most important location on the U.S. side of the border, currency rates are very important,” he said. “When Canadians come across the border, we want their dollar strong. When it is, that’s another headwind for Canadians, especially if they’re buying all our stuff on the weekends at Costco and on the Guide Meridian.”

But there’s a catch-22. What was good for ’18 is not so good for ’19. The Tax Cuts & Jobs Act (TCJA)—enacted by President Trump as of Jan. 1, 2018—provided a boost for the U.S. dollar but “has maxed out, and, with interest rates rising, what were positives now are negatives….a short-term boost to the economy that won’t be repeated in out years,” Paul said.

“In one fell swoop, the corporate income tax rate went from 35% to 21%. Similarly, individuals benefited from new thresholds and brackets for personal income taxes. These tax savings from previous years will be realized when folks pay their taxes in the spring of 2019 for 2018. But what will they do for an encore? Has their extra money already been spent? So, just like monetary policy controlled by the Fed, the fiscal policy—the tax and spend—managed by the President and Congress may have outlived its economic boost as we go through 2019.”

But the good news is, he said, “The only thing that could cause a recession again is something that is not predictable right now—some geopolitical thing we can’t fathom.”

One final topic, germane to a community that supports two major refineries at Cherry Point—Phillips 66 and BP: “We recently saw oil prices take a 23% dip in one month, and the trickle-down effect depends on who you are: If they stay down, that’s good for you and me at the pump, particularly if you drive an SUV or use oil in your business, like so many industrial companies around here. But maybe it’s not such a good thing for our Cherry Point buddies. Last year, for example, Phillips 66 stock was up-and-down, up-and-down. Oil prices cause volatility, and they’re in our neighborhood.”

Paul closed our coffee klatch with some insights and a plea for everyone to keep up with the economic scene, at least on a cursory basis:

“The world is so global. When they cough in Beijing, we’re going to sneeze here in Whatcom County. We’re so tightly connected, some sectors more than others. What happened to us in 2008 caused a meltdown in every country, because we’re just like this (he raised interlocked fingers).

“People don’t realize that in 2018 the U.S. economy was the largest in the world, ahead of China—which will be No. 1 in the next 5-10 years—yet we’re only 23% of world’s total economy. And if we’re just a quarter, we’d better know what’s happening in the other 75%, because it affects us.”

In summary, and in predicting a backing off of economic growth this year, Paul identified that we may have “taken from Peter (in 2019) to pay Paul (in 2018).” Specifically, he outlined how The Organization of Economic Cooperation and Development (OECD) expects the U.S.’s real GDP—gross domestic product—growth to slow next year to +2.72% from +2.90% this year. Then real GDP is to decelerate again in 2020 to +2.13% and normalize thereafter at 1.87% per annum.

“These forecasts are much slower than President Trump’s promised 4%,” Paul said. “So, again, it’s not another recession, because even as the economy slows, it will go into shrink mode. It’ll still grow, but not robustly. That’s not great for business, but it’s not a disastrous Armageddon either.” P+