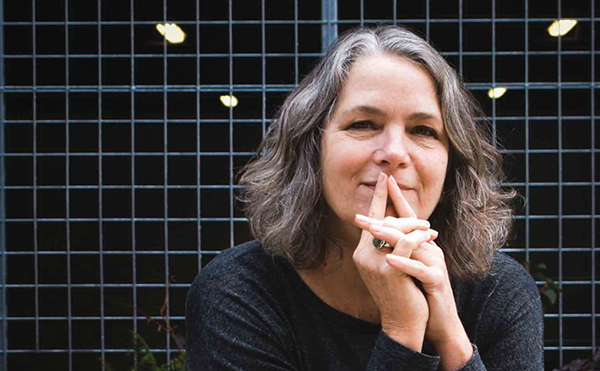 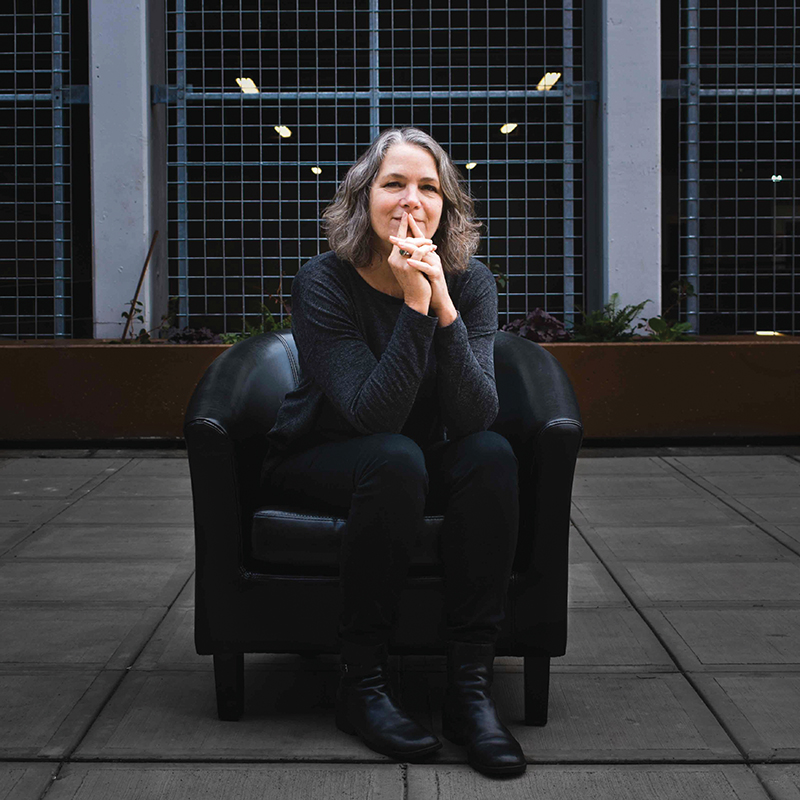 Alice Clark has been synonymous with downtown Bellingham for 20 years. She sold pies at the Farmers Market, worked as a freelance graphic designer, helped create and nurture the Pickford Film Center, all downtown. And for the last three years she has served as Executive Director of Downtown Bellingham Partnership. In her fourth-floor office at the Bellingham National Bank Building, she recently visited with Business Pulse Editor Mike McKenzie and talked about how the Partnership builds on its tagline, “City of Renewed Excitement.”

You’re from St. Louis. How did you discover Bellingham?

I was newly married and my husband and I got on a motorcycle and rode up from St. Louis, through Canada, then down through Bellingham and into California. I can tell you five hours at a time on a motorcycle seat is the maximum anyone should do, trust me. We stopped to visit a friend from St. Louis who had come out here to go to WWU, and we instantly fell in love with the area.

We moved out here as we were both ready to start life on our own, away from our parents. We first lived out on the Lummi reservation and I got a job in Fairhaven as a cocktail waitress at The Hunt, a restaurant featuring a variety of mainly meat dishes directly underneath what is now Three French Hens.

Did your degree from Western Washington set your career path?

Maybe, in a roundabout way. I finished in 1997 in graphic design and illustration while raising (two) kids. After that I did freelance and independent contract work under my business, Matchbox Design & Illustration, and worked with a variety of local clients, including Business Pulse magazine. I volunteered as a graphic designer with a newly forming nonprofit, the Whatcom Film Association, which later became the Pickford Film Center. And that’s how I came upon my true calling­—community building through running nonprofits.

You’ve had your own businesses, too, right?

Yes. While the kids were younger and in elementary and middle school, I did landscaping, helping people with errands, whatever I could as “All-Around Alice.” I spent 13 years with the Pickford Film Center—11 as the Executive Director. It’s a nonprofit, but it’s also a business. After leading it through a multi-year, $3.25 million dollar capital campaign to build the new Pickford Film Center, I stepped down and took a short sabbatical and started Alice’s Pies soon after. I make a killer pie. What’s your favorite?

OK, then you’d enjoy mine—Triple Threat. It has toasted coconut in the graham cracker crust, high-quality coconut cream in the filling, which is topped with whipped cream dusted with more toasted coconut. It’s delicious!

How have these business experiences fed into your current position?

I learned a lot about how to manage people, staff as well as a board of directors. For example, I started the Pickford as a board member, became the board president and in doing so I learned a bunch about nonprofit management and board development. As a movie theater, the Pickford is also a business, so I learned about what it takes to run a business. Going through a large capital campaign also prepared me for this role, knowing what it takes to raise large amounts of money and what it means to renovate a building like we did with the Pickford on Bay Street.

Is most of your work with the Partnership spent managing?

I’m definitely the main orchestrator of it all, which does entail a lot of herding of various cats, but I also like to get into my own little pieces of programming that interest me. As a manager, I really love helping staff get engaged in their work, finding and developing their talents and truly enjoying their jobs.

How is Bellingham Downtown Partnership staffed?

We have five full-time and several part-time employees, some seasonal—like landscaping positions. Next Spring we plan to hire a part-time events assistant. We staff for communications, retail advocacy, business development, and events. Lindsay Payne Johnstone has been here the longest, and she manages events. She’s taken Downtown Sounds from a small happening in an alley to the large event it is today.

Does the Partnership require membership?

No. It used to, but that didn’t work out that well. What benefits are reasonable to offer? Administration of the membership takes time and resources. We had to ask, do we want to spend time figuring out all that, or working to bring in income from other revenue streams and partner with our constituents in different ways?

Now we serve anybody in the downtown core.

If no dues, what pays the freight?

We’re funded by businesses’ sponsorships of events, contracts with the City of Bellingham like landscaping, which entails things like hanging baskets, trash pick-up, weeding, and street clean-up. We also receive income from other aspects of our events—Downtown Sounds, Commercial Street Night Market, Art Walk, Wine Walk­—which includes registration and vendor fees, as well as beer and wine sales. And now, we’re excited about our Main Street program.

How does that work?

As a Main Street community affiliated with the Washington State Main Street Program, we’re able to take advantage of the Main Street Tax Incentive program. It offers businesses a substantial tax credit when they support our organization and Downtown Bellingham. Businesses that make a donation to the Partnership through this program receive a 75% tax credit on their B&O tax liability the following year. So you could donate $1,000 this year, and when you pay your state B&O taxes next year you would receive a $750 credit. What’s great is that you know where your state B&O taxes are going—right here in our community.

What’s your take on defining the “City of Renewed Excitement”?

Since 1980 when I moved here, I’ve seen Bellingham going through a whole cycle: When I first arrived, everything was downtown—Bon Marche, JC Penney and other major retailers. Then the (Bellis Fair) mall was built and slowly things closed, those retailers moved to the mall, and it got pretty quiet. I’ve witnessed the fits and starts of revitalization downtown since then, and now things are coming back.

When I started this position in January of 2016 I felt like there were a lot of positives happening downtown, but also some challenges, like more vacancies than we have now and more behavioral problems. Three years later I can definitely attest that things are really shifting. More businesses are opening, the streets are more active, and it has a more lively feel.

What’s behind the “Interested in Opening a Business” link, with an email from going to the Retail Advocate?

It’s for anybody looking to locate or start a business downtown, and the email goes to Jennifer Walters, who came on board last March as our Retail Recruiter. She will contact you to find out what type of business you have in mind, how many square feet you need, etc. She knows what is available now, what might become available soon, whatever’s possible. She’s here to provide information and support and expedite your process.

What’s up with the storefront improvement grant you offer?

How are you, as stated on the website, “driving downtown urban development”?

Through our Retail Strategy with the City we’re working to more consciously curate downtown. In 2017, the City and the Partnership invested in creating this strategy to enhance the downtown retail experience. We’re focused on how to create a cohesive shopping district—determining the best stores to go next to each other, recruiting with a perfect fit for the look and feel. This strategy also includes supporting the retail businesses that already exist in downtown and helping them become more successful.

Is it all about businesses?

No. We’re also providing strong support for residential density downtown, which we feel is super important to the health of the district. It all ties together. The more people living, working, shopping and eating downtown, the better.

That appears to be your passion. Was that a factor in taking this on?

Yes, I’ve always been really involved with downtown. I’m a community builder at heart, so taking on this position really fit within my interest. I also like challenges and continuous learning, and this position offers plenty of both.

What’s in the immediate future?

The biggest one is the possibility of the JC Penney building being redeveloped. That could become our tipping point, and truly accelerate things as a catalyst project. (An approximate $15 million public-private deal has been approved by the City Council, with the intent of closing the sale by year’s end and starting development in Spring 2019.) That will not only help Cornwall Avenue and downtown as a whole, it also has the potential to help other developers see the possibilities for creating their downtown projects.

What drives you the most, personally?

Providing the support for residential density downtown is a big motivator. As opposed to sprawling outwards into the county, let’s preserve our farmland and create a more urban experience in the city with a full range of housing options.

We want more people walking around more on the streets, going in and out of shops, dining out, attending events. In our business, they call it vibrancy—that’s what we’re all about at the Downtown Partnership. We’re putting all of our energy into that vision.

Four local experts look ahead to 2023

Regenis is Converting Manure into an Environmental Success Story