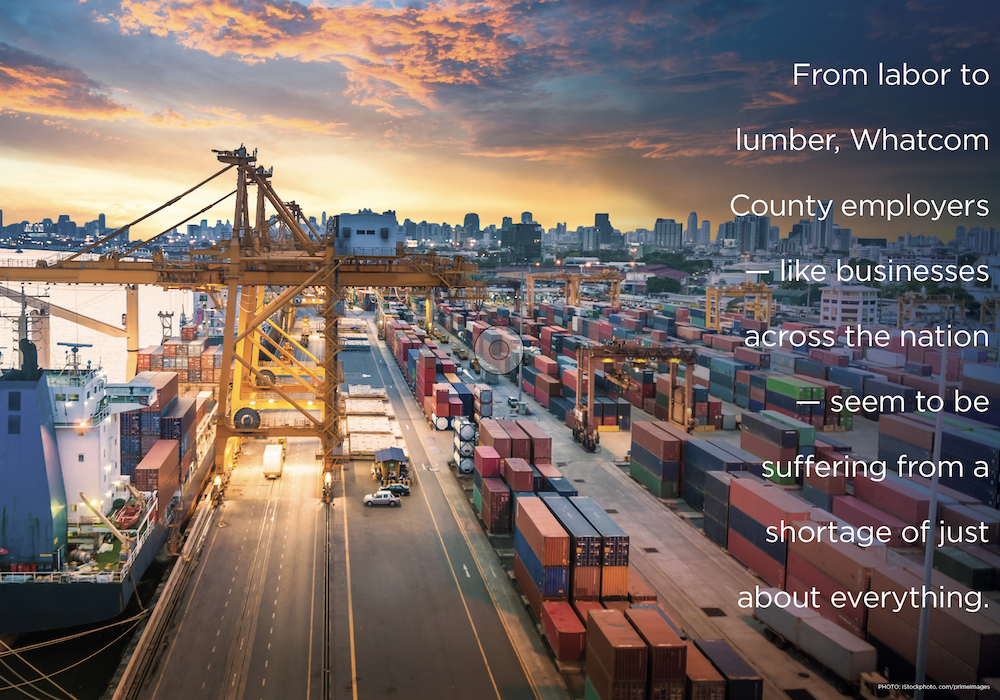 From labor to lumber, Whatcom County employers —like businesses across the nation — seem to be suffering from a shortage of just about everything. Increasingly, retail locations are posting signs warning customers about ongoing product shortages, and digital businesses are warning consumers that delivery could take far longer than expected.

Unlike the shortages in March 2020, these latest ones aren’t reserved for staples like toilet paper or canned food. Right now, America is running out of nearly everything — and the global supply chain snarl has the potential to have a disproportionate impact on highly trade dependent states and communities, like Washington and Whatcom County.

How did we get here?
The pandemic is playing a huge role. The coronavirus and its variants have closed ports and factories across East Asia. The United States government has flooded consumers with multiple rounds of relief money and ongoing low interest rates, causing demand for large electronics and cars to bounce back far faster than most economists predicted. The combination of overheated demand and drastically reduced capacity is a huge contributor to the shortages experienced in Whatcom County.

“The issues happening right now are driven by what’s happening at the ports,” said Lex Ludtke, owner and partner of Ludtke Pacific Trucking Inc. in Bellingham. “Right now, there are lines and lines of ships miles deep waiting to be unloaded at major ports in the Pacific Northwest. The same is true for the rest of the country.”

While the issues at the ports are playing a significant role in the shortages, breakdowns are also occurring in warehousing, container transportation, railroads, labor, and other significant components of the modern supply chain. It isn’t just fast food and retailers that are struggling to fill open vacancies. The same is true of just about every industry that touches the physical goods Americans and American businesses need. The result is an uneven and strange economic recovery that, more than anything else, is very fragile — at a time when fragility is especially worrisome. One long-term solution? Reshoring as much manufacturing capacity as possible back to the United States.

Over the past several decades, American reliance on foreign supply chains has meant that much of what America consumes is manufactured in China and other developing nations. In the United States, imports have increased by 427 percent since 2001, when China was admitted to the World Trade Organization.

The pandemic has showed the interconnectedness of our global economy. While globalization clearly has its benefits, supply chain leaders argue that we need to reinvigorate American manufacturing as quickly as possible. However, despite recent increases in foreign labor costs, it remains cheaper to produce a significant percentage of the goods we use offshore. Technology and innovation can change that. Manufacturing experts believe that gains in productivity and efficiency could minimize the cost advantages associated with globalized supply chains.

“New technology can help domestic manufacturers improve productivity and make American supply chains far more viable against their foreign competition,” said Duane Clement, founder and CEO of manufacturing technology company Data Inventions in Erie, Pennsylvania. “While this isn’t a short-term solution to our current challenges, pandemics and disruptive events happen. Our policymakers need to invest in improving American manufacturing capacity. That has to happen at a local, state and federal level through public policy that encourages investment in American manufacturing communities.”
Manufacturing experts also note that the benefits of reshoring go far beyond just the economy.

“Manufacturing in America is about more than just good jobs,” said Troy Nix, executive director of the Manufacturers Association for Plastics Processors, a national trade association serving small and mid-size plastics manufacturers. “By manufacturing critical items domestically, we position our country and our people to better handle the unexpected. Reshoring isn’t a criticism of any foreign nation or its people. It is simply a matter of improving our economic and physical safety.”

Reshoring isn’t a new concept. The term has been used for a decade or more to discuss the benefits that would come from making more of the things we consume right here in America. Along with having shelves stocked with enough food and supplies to accommodate basic demand — something most consumers took for granted prior to 2020 — manufacturing provides good jobs and community stability. Manufacturing can still be a path to a good income and a middle-class lifestyle for workers who did not earn a four-year degree. Most economists widely agree that manufacturing drove much of American middle-class upward mobility in the latter half of the twentieth century.

Like the jobs created in the Cherry Point industrial zone, many of the roles on a manufacturing shop floor pay the type of wages that make living in a community like Whatcom County possible.

“While the supply chain problems are not impacting the Port of Bellingham, we certainly recognize the impact this has on Whatcom County,” said Don Goldberg, director of economic development at the Port of Bellingham and Whatcom County. “Across the board, breakdowns in the supply chain are occurring as demand for goods heats up, which just makes the problem worse. From ports to ground transportation, nearly every facet of the supply chain has been impacted by the events of the last two years. Resolving this issue should be one of our highest priorities.”

In the meantime, miles and miles of container ships are floating outside of major West Coast ports, waiting to unload their goods. Plants in Asia and elsewhere remain closed, partially closed, or running well below their typical production capacity. For some businesses, the solution has required lowering prices and giving consumers or clients an experience or a product more in line with the money they spend and the wait they may endure. Customers are paying less for less. In other businesses, supply chain bottlenecks have required manufacturers to pay as much as 10 times the normal amount for container space. Those increased costs will be passed on to consumers in some form.

Price increases fueled by a massive increase of the government’s role in the private sector have led to concerns about a return of aggressive inflation that could lead to an economy that looks a lot like the late 1970s.

“The pressure on ports due to a lack of labor is only going to make inflation worse,” said Ken Bell, District 2 commissioner at the Port of Bellingham. “For example, the shortage of truckers is a mystery. There are high-paying jobs out there. We don’t know why they aren’t being filled, but the upshot is that supply chain troubles are going to contribute to higher prices that hurt working families.”

Housing prices — in Whatcom County and elsewhere — have experienced record-breaking increases during the pandemic. An increase in the cost of raw goods has helped fuel housing price increases that have exceeded pre-Great Recession heights. Increases in lumber costs resulting from bottlenecks and trade policies that caused the price of lumber to increase by 200% from May 2020 to May 2021, leaving a growing number of potential buyers locked out of the market.

“Supply chains are a boring thing to talk about — until they aren’t,” said Ludtke. “If we don’t get these ports and the rest of the supply chain straightened out, people in Whatcom County are really going to suffer. The past two years have been challenging enough. People need to know why these shortages are happening, and we need to have a real dialogue with public officials on how we can fix this, before it causes another downturn.”

For the past three decades, an increasingly global supply chain has delivered cheap consumer goods and other advantages to an American economy that rapidly transitioned from depending on building things to depending on consuming things. If these challenges spur a rebirth of American manufacturing, those long lines of ships may end up being worth the trouble.

In the meantime, we still need to make sure we head into the winter with fully stocked shelves and confident consumers. ■