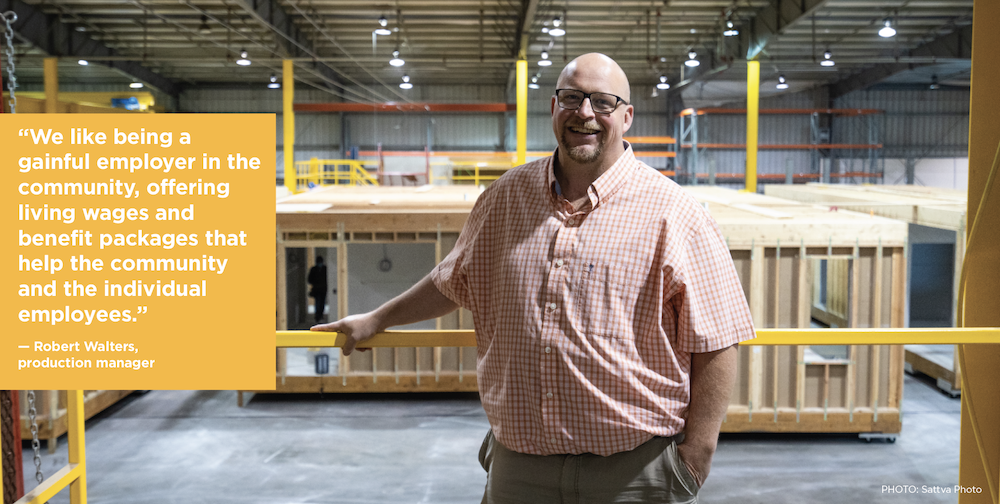 360 Modular Building Systems is changing the way building is done

Humans can’t help but be creative. It’s sewn into the fabric of who we are, leading to innovations that change the way we live. This creativity is allowed to shine even brighter when society has a need that cannot be solved by doing things the way we always have. The building industry is in the midst of such a moment. The demand for new buildings, especially houses, is at an all-time high, and over the last decade, fewer and fewer people have chosen to enter the trades. This scenario has fostered an environment perfect for an innovative company like 360 Modular Building Systems.

360 Modular Building Systems is a new company in Ferndale that is changing the way building is done. With a focus on quality and in a controlled environment, the company can create buildings, large and small, that will be assembled later on-site. The company has systematized how it constructs buildings while leaving enough flexibility for custom builds.
“We work with each client individually,” said Robert Walters, the company’s production manager. “That’s the customer end of our business, making modular construction work for the needs of our clients.”

It is this approach that company leaders feel sets 360 Modular Building Systems apart from other companies
On the larger side of things, the company is currently working with a hotel chain — with buildings up to five stories — and is working on an animal shelter that will be shipped to Alaska.

On the flip side, the company also builds small and can do so in an efficient manner. 360 Modular Building Systems recently constructed 50 tiny shelters for the City of Bellingham to be used as short- and long-term housing for the homeless. In the middle of these extremes lie the single-family and multifamily housing projects the company is building.

It would be easy to confuse modular building with manufactured building. The processes and standards are different, with modular buildings constructed as if being built on-site but with the pieces assembled in a controlled environment.

“We are modular, not manufactured, and so there’s a little bit of difference in our methods and our quality control issues,” Walters said. “Speaking from my background as an on-the-ground framer contractor for so long, the quality we put out is just as good, if not better. Everything’s built in a jig to be held square, straight and true. We’re required as a modular builder to be building at the same specs as you would be on the ground.”

The process at 360 Modular Building Systems begins the same way it would with any construction project: with a plan. The company has in-house designers but is happy to work with outside architects and designers as well. It is best for the company to be involved in the process early on, so that during the design phase, building the home in a modular fashion is taken into consideration. The company can adapt existing designs, but that does create an extra step that can be avoided. 360 Modular Building Systems is a custom builder, so each plan is designed specifically for the client’s needs and desired specifications.

Construction of most of a building is done in the warehouse, where workers have the benefit of working in a controlled environment.

“We have the effectiveness of framing and building on a flat warehouse floor or on our framing tables, so things are ergonomically up at waist level,” Walters said. “Our team shows up in the morning, and their tools are set up and ready to go. There are no slowdowns for weather; we have a nice, big, beautiful roof over the top of everything.”
Once the pieces of the building are constructed, they are shipped to the construction site, where they are assembled on top of a traditional foundation with the help of a crane. Having the pieces prefabricated makes for a quick assembly once on site. In most cases, the roof of the structure is built on-site once the rest of the building is put together.

The building process and the ability to ship pieces means that 360 Modular Building Systems can build for customers anywhere they can ship to. Currently, the company services the entire West Coast, from Alaska to California. The Ferndale location means the company is centrally located on the coast and close to shipping ports. The long-term vision is both to have clients out of the area and to build locally. The combination would allow the company to grow and, in turn, support the Whatcom County community.

“Our goal is to be a good corporate neighbor for everybody around us; we do as much business as possible and as local as possible, Walters said. “This morning, I was on the phone with several suppliers that are right here in Ferndale and in the Bellingham area.”
In addition to sourcing locally, 360 Modular Building Systems does all it can to be as efficient with that material as possible. A system of upcycling within the facility limits the amount of scrap lumber that goes to waste. With the company assembling its own open web trusses for ceiling systems, workers can send many of the cutoffs elsewhere in the plant to be used. Because so much of the construction process happens in one place, the ability to work and use materials efficiently is maximized.

The business, which started at the beginning of 2021, already is looking to grow — and at doing so locally. Company leaders have been working with local government, which was integral in them building the homeless shelters. They also have connected with the Lummi Tribe to discuss constructing buildings and hiring.

Currently, the company has approximately 20 people, with 15 on the floor and five in the office. In the next three to six months, it is looking to bring on another 50 to 60 people. Many of these positions will not need construction experience, and all will have the ability for advancement, if desired. While having construction experience allows people to enter at a more advanced level, the way in which the building is done allows anyone to step in and quickly become a productive member of the team. Unlike at most construction jobs, working for 360 Modular Building Systems means working inside in a controlled environment, protected from wet Pacific Northwest winters.

The building system lends itself to automation, but 360 Modular Building Systems is not interested in that, both for the quality aspect and the human factor.

“We like being a gainful employer in the community, offering living wages and benefit packages that help the community and the individual employees,” Walters said. “We don’t just want an office with four or five engineers telling the computers on the floor what to do. We think having human hands helps with quality control.”

To learn more about what 360 Modular Building Systems is doing, to discuss your next building project, or to learn about employment opportunities, please email info@360-modular.com or call (360) 505-0360. ■