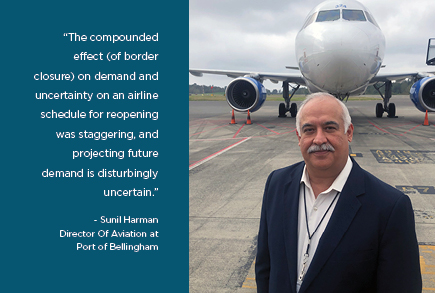 From the time he entered aviation school to this year, his 35th in airport administration (the last five at Bellingham International), Sunil Harman has dealt with everything you could imagine would wreak havoc at an airport.

At Embry-Riddle Aeronautical University in Daytona Beach, Florida — where Harman earned bachelor’s and master’s degrees in aeronautical, aviation and aerospace science and technology — the curricula required simulating every major crisis known: severe weather conditions, catastrophic flight responses, and, yes, even epidemics (SARS, Ebola and others). Harman has logged over 10 years at Florida airports, where hurricanes and other tropical and subtropical storms are part of every-year life. At Miami International, he dealt with the trickle-down impacts of 9/11. And now this. Nobody saw the COVID-19 pandemic coming, and nobody foresaw how long and hard it would hit the travel industry. In an email Q&A, Sunil described the local reverberations of the pandemic:

BP: Describe the impacts of the COVID-19 shutdown on your industry and specifically on BLI.
SH: The global public health emergency has significantly impacted the air travel industry and airports. Bellingham International Airport, as a federally funded and obligated commercial service airport, is categorized as an essential critical service infrastructure and is thereby required to stay operational for transporting needed goods and personnel.

We remained open and operating under specific health and safety procedures that keep employees and customers safe.

BP: How’s that worked?
SH: Our terminal expanded in 2013 to accommodate passenger growth for at least the next 20 years. The additional capacity makes it easy for travelers to spread out and maintain social distancing. In early March, the Port of Bellingham implemented internal operational protocols that required the use of gloves and face coverings by all employees, enhanced cleaning and disinfecting procedures, remote and rotating shift work, and social distancing.

For passengers, we reduced and separated hold room seating for arrivals and departures, painted social separation floor markers, and conspicuously positioned disinfectant products. In addition, we converted all restrooms to a fully touchless environment and installed private, sanitized lactation pods for mothers.

By mid-May, BLI was among the first airports to implement mandatory face coverings for anyone accessing the commercial terminal. We posted all preventative measures in restrooms and on all public-messaging monitors in the terminal. Our safety measures complied with the COVID-19 Commercial Service Airport Requirements announced Sept. 24 by Gov. Jay Inslee.

BP: What have the traveler impacts been?
SH: By March-end, the year-over-year passenger (enplanements) declined by 41%, largely due to curtailment of Canadian customers, with the closure of the border.

BP: How much did the airlines cut back?
SH: Allegiant eliminated all service in April and May, cratering year-over-year enplanements by 54.5% and 62% before resuming a gradual return in early June.

Alaska scheduled between one and two daily flights to Seattle (down from five daily), but with insufficient demand they operated an average of only five flights a week. Even with both carriers operating with reduced schedules, extremely low fares and waived change and rescheduling fees, the passenger demand was down by 68% and 69% in July and August.

The sharp declines resulted in both of our partner airlines reducing seat capacity in markets such as Las Vegas and California.

BP: Any projections of increasing the seats/flights?
SH: We serve and depend greatly on Canadian customers. With the extended border closure for all but essential travel, the compounded effect on demand and uncertainty on an airline schedule for reopening was staggering, and projecting future demand is disturbingly uncertain.

BP: Didn’t some scheduling get bumped up in September?
SH: For the remainder of the year, barring any significant resurgence of COVID-19:

Alaska Airlines, using the 76-seat Q400 through October, projected a possibility for four daily Seattle flights to commence in November.

Allegiant Airlines operated a varying schedule through October to Las Vegas, Phoenix and Palm Springs, with Oakland resuming in November.Plans called for service to Los Angeles around the Thanksgiving and Christmas holidays. Thus, we anticipated October to resemble August and September, with about 7,500 enplanements, increasing to 9,000 or slightly more in November and December.

BP: Any positives to build on?
SH: Yes. With operating expenses of $5.56 million, the airport remained cash positive. This year through September, the decline has resulted in a revenue loss of $2.77 million, estimated to grow to $3.8 million for the year.

Plus, BLI has been and remains one of the lowest-cost commercial service airports in the U.S. BLI presents an opportunity in recovery for airlines to benefit from a high-quality, low-cost operating environment within a passenger catchment area of more than 3.4 million people.

Airline fees per enplaned passenger at BLI are $5.70 compared, in our market, to 10 times that at SeaTac and nearly 20 times more at Vancouver, B.C. Last year the direct impact on revenues from the opening of Paine Field in Everett resulted in a $489,000 loss in our operating revenues, down to $6.83 million.

BP: To stay solvent, what monetary help did you receive?
SH: With 2020 operating expenses budgeted at $5.98 million, the year-ended operating deficit of $2.13 million would have been untenable were it not for the $5 million in gap funding from the Coronavirus Aid, Relief, and Economic Security Act.

BP: Speak to the prognosis and solutions.
SH: The nation’s airports will require recovery and stimulus funding through 2023. The proposed Health, Economic Assistance, Liability Protection, and Schools (HEALS) Act, or some similar relief legislation, is the only way to secure the national system of commercial airports.

Given all the uncertainty, the Port’s proposed 2021 operating expenses budget for BLI is considerably lower, at $4.75 million. This was achieved through personnel reductions — from 18 full-time staff to 15, eliminating one management and two operations positions — as well as reductions in contract services.

The Port also delayed any nonessential or non-grant-funded capital improvements for at least the next several years. These reductions, combined with the CARES funding, should see the airport through 2021.

BP: Paint the big picture of effects on Whatcom County’s economy.
SH: The overall impact is best derived from a recently completed Aviation Economic Impact Study for the Washington Aviation System [administered by the Washington State Department of Transportation Aviation and supported by funding by the Federal Aviation Administration]. The 2018 pre-pandemic airport activity and employment data identified BLI as generating $471.5 million in economic benefit. An estimated year-ending 2020 decline of 70% suggests an estimated overall adverse regional impact of $330 million.

BP: How have you repurposed personnel and properties and operations?
SH: New safety procedures for social distancing necessitated shift and duty-hour changes and separation of activity areas between the airport rescue fire fighters and commercial terminal operations centers. That kept our trained and operationally necessary staff safe and effective.

Specifically, a positive test among the ranks of airport rescue fire fighters, who are trained and certified to respond to aircraft emergencies, would have rendered them all to quarantine. Hence, the three airport operations managers, also certified as airport rescue fire fighters and who came up from the ranks into their current positions — and are on-call 24/7 — were scheduled for rotating hours to maintain effectiveness. The airport’s administrative staff responsible for secured area badging and numerous other customer-service functions rotated to ensure continuity.

For airport parking and janitorial contractors, reallocation included taking shuttle vans offline and assigning an increase in the frequency and level of disinfecting and cleaning.

BP: Did you establish quarantine areas or methods of dealing with people with symptoms?
SH: Operating procedures were put in place for airport rescue fire fighters staff to not engage and to contact mutual aid at the Bellingham Fire Department to evaluate and, if needed, transport.

BP: How were the Transportation Security Administration and airlines involved in all that?
SH: Stakeholders and tenants are always informed of the Port’s policies and procedures. They have worked with the Port’s management team to implement COVID-19 procedures, including the distribution of face-covering masks, touchless passenger screening and enforcement of adopted policies. Also, we adjusted with updates due to changing Centers for Disease Control and Prevention and state guidance.The airlines and TSA adopted touchless procedures, and the Port budgeted an estimated $20,000 in upgrading all restrooms to touchless.

A blog post in Airport World stated: “SARS, swine flu, MERS, Ebola and Zika viruses have disrupted global air travel to different degrees. But the severity of COVID-19 blindsided the U.S. aviation industry in ways not experienced since the terror attacks of 9/11.”

BP: Your thoughts about that perception?
SH: The coronavirus has by far been the most profoundly catastrophic event in the history of civil aviation. The global impact and the magnitude of job losses worldwide is estimated to exceed 46 million. All the other events combined don’t come close to the scale of this pandemic’s disaster.

For example, airplane manufacturers Airbus and Boeing, their supply chains of manufacturers, and their distribution logistics slowed immensely and could halt entirely due to delayed and canceled orders and options for customer airlines, who are burning through cash at a rate of $5 billion a day. Even with government grants and forgivable loan paycheck protection programs of over $52 million, airlines have identified the need for another $25 million to $28 million to prevent the layoff of 70,000 more employees.

Ironically, a pre-pandemic concern for lacking a sufficient number of trained airline pilots has turned into a surplus of pilots. The terror attacks of 9/11 and the ensuing two-year downturn resulted in pilots being furloughed and/or being unwilling to return to the volatility synonymous with the airline industry. Given the estimated five to six years for recovery this time around, there may be a significant additional delay, as the workforce will have moved on.

BP: Did you have lessons to draw from in your experience at Miami International Airport during 9/11 that are helpful/useful now?
SH: Without doubt, 9/11 forced the industry to significantly change policies and procedures, as well as harness advanced technology to prevent a deliberate security breach. We realized a need to successfully protect against terrorist acts continuously at a nationally coordinated level, and we succeeded — 20 years later there has not been a single breach.

BP: Your vast background appears to have prepared you well for major emergencies.
SH: Incident and crisis management certification is a requirement for us in the airport management field, covering regulations to plan, simulate and train for — and to maintain proficiency to deal with — airport and national disaster emergencies, whether they are accidents, terror attacks or natural disasters.

We must maintain current and updated airport emergency and security plans. Scenarios involving hazardous materials and biohazards and the equipment and procedures to effectively respond lie within the scope of such plans.

BP: Was it different dealing with a heretofore unknown entity?
SH: Yes. This long, drawn-out pandemic had both airlines and airports in need of national policy guidance, testing and enforcement procedures that didn’t materialize. That caused us to adopt a patchwork of varying measures unenforceable with laws.

For example, face-covering is known to be the most effective means of preventing the spread, though it still hasn’t been made mandatory nationwide. This pandemic required a much more rigorous, disciplined and coordinated global, national and industry response.

BP: What’s the biggest takeaway?
SH: Hindsight is always perfect. … A comprehensive shutdown followed by a carefully phased and gradual reopening with testing and contact tracing should have been the way to proactively respond to the pandemic. This lesson should become the playbook for future responses and treating contagious pathogens as a threat to national security.

In Spite of Disruptions, We Didn’t Run Out of Food. Why...