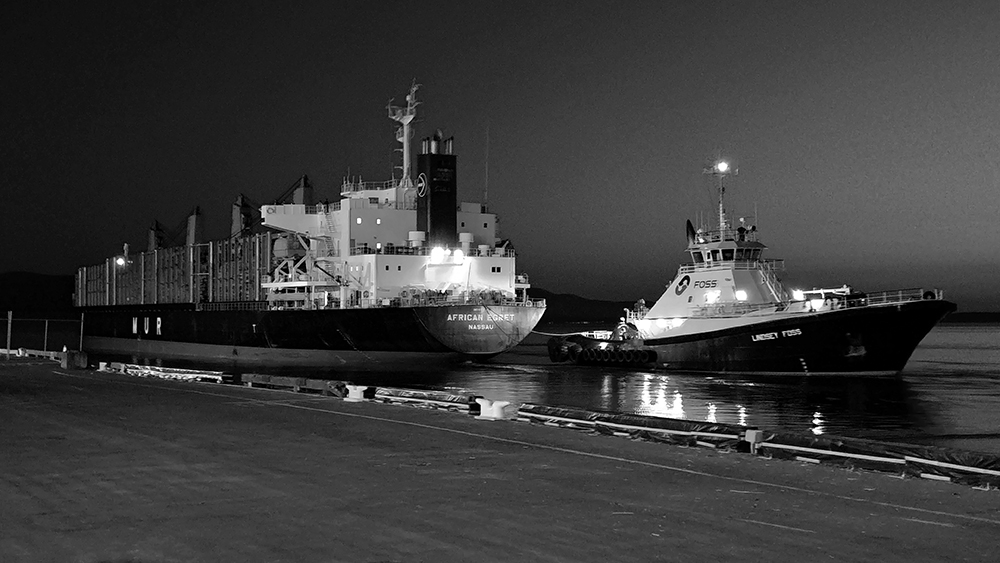 Cargo Ships and Jobs Return to the Docks of Bellingham

Cargo ships will return to the Port of Bellingham this year, but their economic impact depends on the frequency of their arrivals.

Ports America, the largest terminal operator and stevedore in the United States, signed a three-year service contract with the Port of Bellingham in late 2018. Port of Bellingham officials and Local 7 of the International Longshore and Warehouse Union (ILWU) have high hopes that the agreement will result in the first consistent use of the Bellingham Shipping Terminal in 16 years.

“What we’d like is to have several of the ocean carriers call on a monthly basis,” said Chris Clark, Terminals Business Manager for the Port of Bellingham.

Clark said the first cargo ships most likely will bring steel products such as coils, pipes, and beams. Under the terms of the contract, Ports America, based in New Jersey, also has exclusive stevedoring rights for certain types of steel, inbound international forest products, metal/aluminum ingots, modules, and oversized and project cargoes. Much of the inbound cargo will be stored temporarily at the Bellingham shipping terminal in Fairhaven before the cargo gets trucked to Canada as its final destination.

The contract is great news for ILWU Local 7, which has seen Port of Bellingham jobs drop to nearly nothing, according to Darren Williams, the local union’s Secretary-Treasurer. “We have a very limited local workforce,” he said. “If we get a ship a month, we’ll add 5-10 members.”

Port Commission President Ken Bell foresees much more, though job and financial projections are not specifically cited in the agreement. In an interview after a news release announcement by Ports America, Bell said, “The possibilities are endless in how this deal will open the working waterfront.”

The vision in the deal is for a return to the activity of the 1980s and 1990s when Bellingham’s Georgia-Pacific mill and the Alcoa Intalco aluminum smelter in Ferndale used the terminal. At their peak, they required 45 full-time union positions and 30-40 part-time workers. But the mill closed and the Intalco ships went away, and by March 2002 the terminal had no ships calling.

The only significant activity since then was a single cargo ship bearing organic soybean meal in 2017 and some barges last summer delivering armor rock for waterways. “It was a major transition from what it was then (’80s-’90s) to what it is now,” Clark said.

Bell commented, “It’s not so much the money it will make, it’s about employment opportunities and new products going in and out. We’ll generate revenue from fees for parking, storage, etc. But it’s a long-term vision, not short-term gains. We can build up the infrastructure and actually put people to work that we haven’t been able to.

Local 7’s Williams praised recent efforts to attract cargo ships. “Over the last 18 months, the Port has made the right decisions,” he said. Williams added that ILWU Local 7 leadership met with Ports America to ensure a mutual understanding of the scope of work, manning requirements, safety, and objectives.

Ports America stated that it recognized and valued Bellingham as the last Pacific Northwest seaport between the United States and Canada. “It was only a matter of time before cargo operators recognized the Bellingham Shipping Terminal as a congestion-free alternative to the docks and terminals serving Vancouver and Seattle,” Bell said.

Clark pointed out that ocean carriers increasingly face delays getting into Vancouver, B.C., ports and then customers struggle to get their cargo off of those terminals.

In breaking the news, Ports America Director of Breakbulk and Project Cargo Bart Goedhard acknowledged several advantages of the deal. “In addition to abundant berth space, warehouse and laydown space, the terminal is near major cities, has a dedicated truck corridor to I-5, and has close proximity to rail,” he said.

All of the primary local stakeholders, primarily the Port of Bellingham and the Local 7, believe the economic impact of the Ports America contract will extend far beyond just more union jobs. “Many suppliers in Whatcom County will benefit from the increased cargo activity,” Williams said.

Port of Bellingham is considering whether to designate the shipping terminal and surrounding areas as a Foreign Trade Zone (FTZ) where customers can store goods without having to pay United States import duties and taxes. But Clark is leery of the long-term storage aspects of an FTZ, which extends the industry standard of 45 days for cargo off-loaded at a terminal to be taken away to its final destination.

When much terminal space is used for cargo storage, it may prevent other ships from arriving. But long-term storage has strong appeal to shippers, both incoming (ships) and outgoing (trucks). “If we have to do it (FTZ designation),” Clark said, “we will.”

In addition to the three-year contract, Ports America has options for two additional terms of three years each. Headquartered in Jersey City, New Jersey, it is the largest independent marine terminal operator in North America. Ports America provides terminal management and a full suite of stevedoring and related services.

“This is outstanding because of unrestricted access to all the shipping terminals and ports they have access to,” Bell said.  Ports America, with about 12,000 employees, does business at more than 80 terminals in 42 ports in North America, handling containers, roll-on/roll-off cargo, general cargo, and cruise line passengers.

“We didn’t have those avenues to other markets,” Bell said. “And ships will be empty when they get ready to leave us. We can be proactive with commerce going back out when ships come in, move things like wood and grains.”