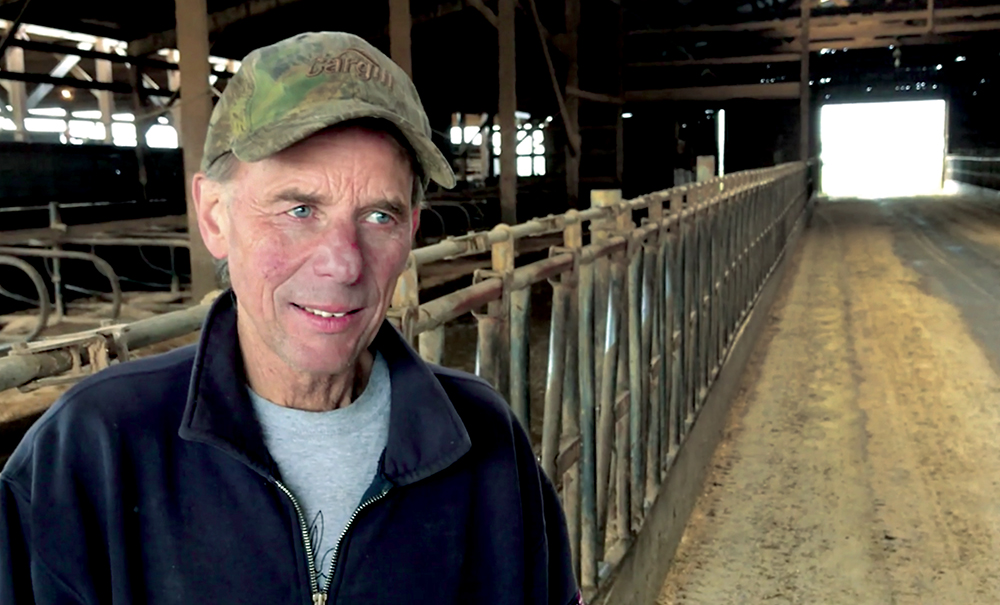 “The hardest decision I ever had to make.” —Glen Blankers

Some of Glen Blankers’ earliest memories are of playing with the cows and calves on his father’s and grandfather’s dairy farms, up on the Guide Meridian, scarcely a mile south of the Canadian border. In late November 2018, Glen sold the cows.

That brought an abrupt ending to three generations of the Blankers’ familial farm. Glen was the last of seven Blankers dairy farmers to call it quits. “It was the hardest decision I ever had to make as a farmer,” said soft-spoken Glen. But, given the dim future prospects, he said he has no doubts he made the right move.

The conditions that forced the Blankers family’s long-dreaded decision also loom for many dairy farmers in Whatcom County, the state, and the nation. Demand for dairy products is declining in the West, while increasing in Asia. A sharp rise in production efficiencies means fewer farmers are producing more milk, the very efficiencies that lead to ever-larger dairy farms—and the decline in smaller ones.

Glen Blankers’ farm, with a little more than 300 milking cows, was slightly above the national average, though below the local average of about 450 cows. At age 66, Glen reluctantly faced the realization that, without any children eager to take over the farm, now was the time to call it quits. “I didn’t want to leave in a walker,” he said with a wry smile.

He said he spent over two years trying to keep the cows in the county, offering other local farms the opportunity to take over and manage the operations while retaining the herd and keeping the farm active—a common practice. “But, I could basically see the handwriting on the wall,” Glen said. “They would leave the county and go to some larger dairy.”

One of the many factors that led to Blankers’ sale was the sharply declining value of the cows themselves. In earlier years, he could bolster income revenues by selling his high-value replacement cows, back when they went for $1,800 to $2,000 apiece. “Now they’re half that,” Blankers said. That creates a conundrum: Sinking prices make it more necessary to sell, but also reduce the income needed for retirement when you do sell.

Glen cited a number of other factors prompting his difficult decision. “Land and feed prices and labor costs all are higher, and milk prices are lower.” The continually depressed price most Whatcom family farmers get for their milk is the primary factor. Most ship to Darigold, the farmer-owned Northwest cooperative, and prices are set on the global market.

Blankers also pointed to labor costs that have gone through the roof. “Family leave, mandatory sick leave, the increased paperwork—all contribute to rising costs.” The math is easy; they all add up to cashing out.

But the loss of his long-time employees hurts even more than the loss of his cows, Glen said. “There are five or six families that this farm provided a livelihood for, and they’ll have to find other employment.” His general manager had been with him for 22 years—half the time that Blankers farmed. “ He wasn’t sure if he and the others would find jobs that fit them as well,” Glen said, ruefully. “They all had a good fit here. They found their niche.”

Among all the conditions that combined to make things difficult, the “straw that broke the camel’s back” was a mishap triggered by an unfortunate turn of nature. During 2016 and ’17, Whatcom County experienced a highly unusual wet season, which stretched from early Fall into late Spring. Whatcom dairy farmers had to delay the Spring application of manure to their fields because they’re limited in when they can do the application by some of the most restrictive nutrient-management regulations in the nation.

Hence, the storage lagoons that hold the manure until it can be safely applied became dangerously full. Glen didn’t want to risk manure spilling from his lagoon and causing a discharge, so he transported it to an empty storage tank at a neighboring farm. With more and more dairy farmers going out of business, empty lagoons and tanks are not that hard to find.

However, the pumping equipment likely hadn’t been used for some time. It failed and caused a minor discharge. Glen self-reported the spillage and received a notice of violation from the Department of Agriculture, his first and only violation in his 44 years of farming.

He thought that was the end of it, until 2018 when he received a letter from the Department of Ecology. Because he was now a “known polluter,” he was required to get a pollution permit known as a CAFO (Concentrated Animal Feeding Operation), despite having a relatively small farm. Coupled with the costs of the stringent state Dairy Nutrient Management regulations passed in 1998, the CAFO permit included enough additional costs that Glen had had enough. The camel’s back broke, and it triggered his terrible and hard decision to sell.

To add insult to injury, Glen recently received a letter from the Department of Ecology reversing its earlier decision to require him to secure the CAFO permit. “Too late,” he said with another wry smile.

Glen stood in his now-empty barn, reflecting on 44 years of farming, as he shared the story of the demise of his business. “It’s hard knowing the kids and grandkids can’t come out to the barn and play with the cows and calves,” he lamented.

His eyes went out to the distance, perhaps thinking of those wonderful memories that he could not pass on to the following generations.

As long as the state controls the water, it is responsible for drought help

Andy and Erin Vitaljic want to feed Whatcom County and beyond

What will it take to save farming?

The case against an adjudication of Nooksack water rights

Agriculture Will Continue to Lead