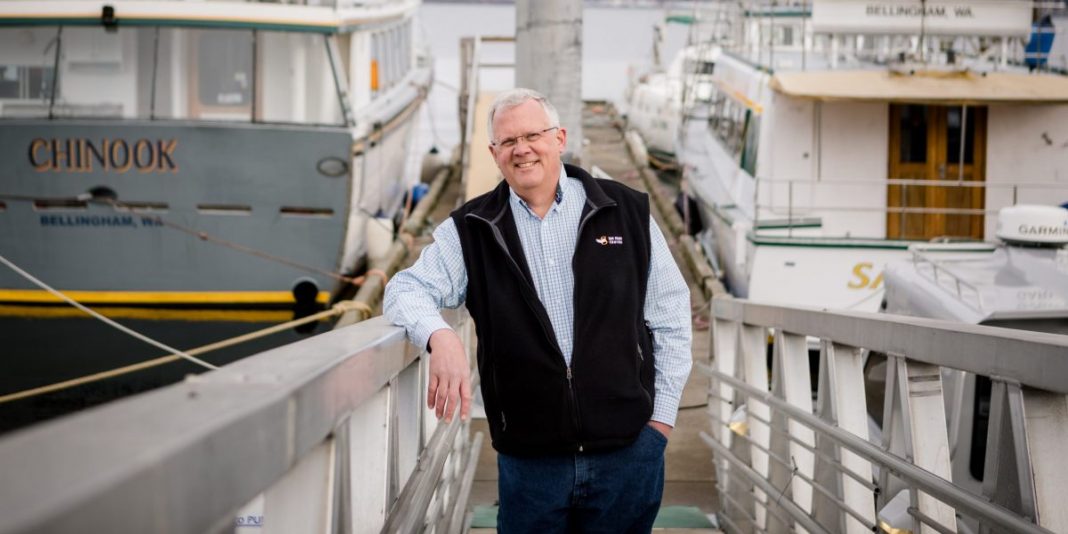 San Juan Cruises born from a lifelong love of the sea

San Juan Cruises founder Capt. Drew Schmidt’s love of the sea is ingrained in his DNA. Born and raised in the seaport city of Seattle, he regularly played on area beaches as a child. As a teen, his love of boats led him to join Sea Scouts, a nautical program of the Boy Scouts of America. There, he learned crucial boating skills such as piloting, navigating, engineering and general boating safety. His passion for boating stayed strong, and as a young adult, he worked for various charter companies and eventually became a captain. You could say that from a young age, his career path in the charter industry was divined.

“So many people that I knew were in the charter boat business, and I wasn’t smart enough to do something different,” Schmidt joked. “But as I got older, I realized I enjoyed the business side of things as much as I enjoyed being a captain.”

So, in 1987, he moved to Bellingham to start his first business venture, Gray Line Cruises, a franchise of Gray Line. The company offered passenger ferry service between Semiahmoo Resort in Blaine and Friday Harbor in the San Juan Islands, along with wildlife cruises.
After the completion of the Alaska Ferry Terminal, the Port of Bellingham approached Schmidt about relocating to the port.

“I recognized this was a great opportunity,” he said, “so in the fall of 1991, we moved the business to Bellingham and changed the name to San Juan Cruises.”

The move also prompted the company to expand passenger ferry service, and for many years, San Juan Cruises operated boats servicing Bellingham, the San Juan Islands and Victoria, British Columbia, Canada. For the next two decades, the business thrived. Then came the change in passport laws.

Starting over after 20 years
On June 1, 2009, the United States enacted the Western Hemisphere Travel Initiative, which established new document requirements for travel into the United States from Canada, Mexico, the Caribbean and Bermuda, whether by land or by sea. San Juan Cruises experienced a sharp decline in business, as not all travelers had the required documentation to cross the border.

“That was our biggest challenge to overcome,” Schmidt said. “We grew a business for over 20 years, and it blew up, and we had to start over.”

It was even worse than the recession from a year earlier.

“Even the 2008 recession didn’t impact us much,” he said. “Fuel prices went up, which was a bit of a struggle, but beyond that it was OK. But the new passport laws meant we had to change the business model to add more domestic service as international travel declined.”
In 2010, Schmidt ended service to Victoria, opting instead to focus the company on cruises throughout the scenic San Juan Islands.

Expanding services yet remaining sustainable
Today, San Juan Cruises operates four vessels and offers a variety of cruises, including crab dinner cruises, wine and beer tasting and bird watching cruises, whale watching trips, and private charters. As successful as San Juan Cruises is, Schmidt says he has no plans to expand the company or make any major changes for the foreseeable future. He will, however, continue to look for opportunities to add services or to improve an existing service.

“I don’t want San Juan Cruises to be a gigantic company,” he explained. “I want us to be sustainable and able to give people a great experience.”

In that vein, with the continued growth in the local microbrewery and wine industry, in recent years San Juan Cruises added two summer cruises: the Bellingham Bay Brewer’s Cruise, which features beer tastings from Boundary Bay Brewery and two additional rotating breweries from the Pacific Northwest, and the “unWINEd on the Bay” wine tasting cruise, which features both locally produced wines and international wines.

“We have an agreement with the La Conner Channel Lodge to use their dock,” Schmidt said. “Last year, we partnered with bus tour companies and senior centers and brought a boat down to do cruises through Deception Pass and the Swinomish Channel during the Skagit Valley Tulip Festival in April. This year, we expanded to offer the festival cruises as well as crab dinner and history cruises throughout the summer.” While the newer cruises are growing in popularity, the majority of business comes from the whale watching cruises, he said. San Juan Cruises is a member of the Pacific Whale Watching Association and has been practicing responsible whale watching for over 30 years. The company adheres to rules that exceed state and federal guidelines to protect whales’ well-being, both now and in the future.

Responsible whale watching means having no impact on whales, he said. Key requirements of both state and federal laws mandate the distances a boat must maintain from various breeds of whales and set speed limits to minimize impacts from noise. “We run parallel to a pod of whales to provide a good view but to ensure we don’t get in the whales’ path,” Schmidt said. “It’s important, particularly with the struggling resident Orcas, that we do everything in our power to help them and minimize our impact. ”Currently, there are five types of whales in our waters, with the most common being orcas and humpbacks. According to Schmidt, 10 years ago it was rare to see a humpback in the Salish Sea, but today they are common. The 2019 season proved to be a phenomenal year, with whale sightings on nearly every one of the trips. “There are about 30 whale watching companies in Washington and British Columbia,” Schmidt said, “and we work together, sharing information to help ensure our customers have a great experience. It’s pretty unique to have competitors work together. We shifted to a later departure so we could visit the areas whales were spotted earlier in the day.”

San Juan Cruises has a loyal following of customers — some who experience all of the cruises, and some who repeat the same cruise throughout the summer. Schmidt says that no matter which cruises his clients book, and no matter whether they are first-time or repeat customers, they will feel welcomed. They’ll also learn from highly experienced, local guides and have the chance to enjoy beautiful waters, pristine shorelines and incredible wildlife.

Schmidt’s passion for the sea is part of a shared DNA, as San Juan Cruises is now a family affair. Schmidt’s children work for the business, and his son is a captain. Schmidt couldn’t imagine living and working anywhere else.

“It’s a joy,” he said. “I get to live in a beautiful place. I get to work with my family and spend time with nice people, whether it’s staff or customers. It’s a great way to spend the day.”