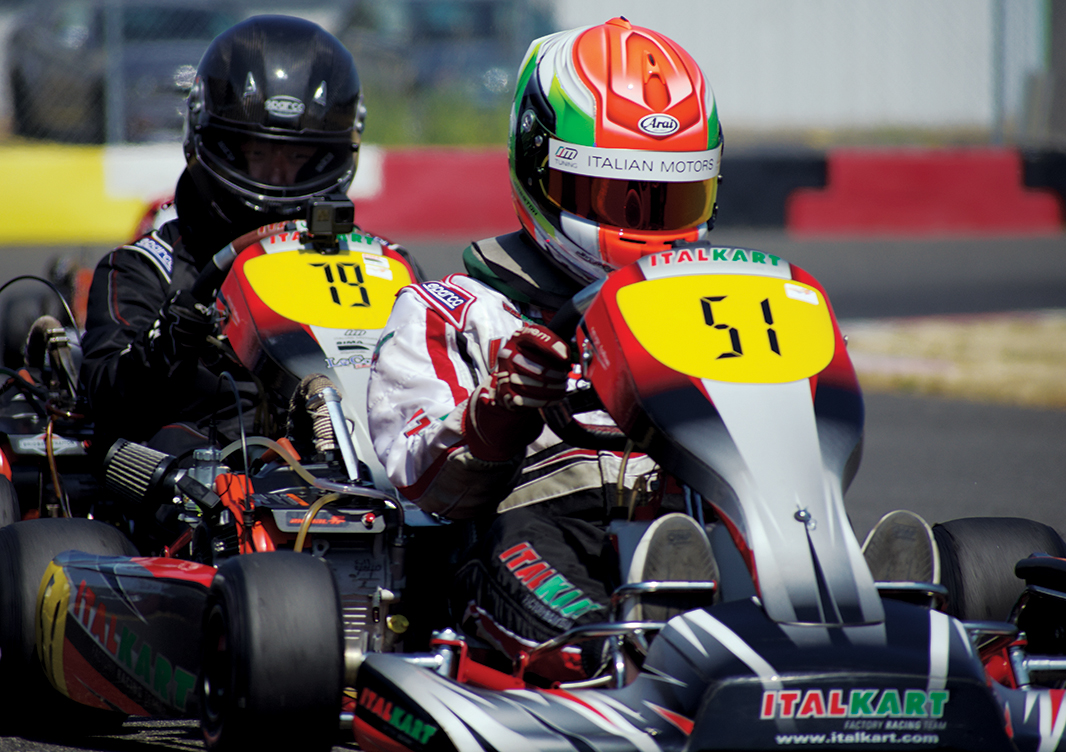 One, Oliver Carpentier, stood about tire-high to a racing kart. He’s 4. He’s still learning. His brother, Levi, already races karts at age 8. Their uncle Michael has retired from Formula sports car endurance racing (think of 24 Hours of Daytona or LeMans) because of an injury. His son, Massimo, is filling Michael’s vacuum—at age 10!

Their grandfather, Claudio Valiante, began this family racing strain after he moved from Italy to British Columbia in 1965 and started racing vintage Fiats. These three generations of race car driving have all come to a zenith in Sumas, where they train, race, or work. The Valiante clan now operates Sumas International Motorsport Academy (SIMA) in northeast Whatcom County, sitting on 15 acres hard by the Canadian province where kart racing has long been a rage.

Claudio’s daughter, Claudia Carpentier (and Oliver and Levi’s mother), is  General Manager of SIMA. And Claudio’s wife, Beverly Valiante, takes care of the grandchildren. “Obviously, we’re a tight-knit family,” Claudia said. “And everything we do here revolves around treating our customers like they’re ‘family,’ too.”

Everything at SIMA operates under the umbrella of Italian Motors USA: one big pit stop, so to speak, incorporating everything associated with kart racing.

Subsidiary divisions outfit a kart driver completely, from head-to-toe with specialized helmets, racing suits, and the company’s own brand of imported racers (ItalKart). The Valiantes design the engines and chassis and have them manufactured in Italy and stocked in the Sumas warehouse. SIMA is one of the largest kart sources in North America, through online sales and shipping anywhere on the continent.

And SIMA is for everyone, female or male, any age. The experience holds appeal for a family outing or a company team-building retreat. All the necessary equipment is for rent, along with the karts and time on the 17 curves of the three-quarter-mile track, the only artificial turf track oval in this region.

Then there’s the learning phase. SIMA stages a driving academy, starting at pretty much any age; some families have two-year-olds driving karts. (Children must be seven and certified before they can enter races.) Kart owners can rent garage storage space, and the maintenance and parts departments will keep their karts shipshape.

And the cost? “It’s the least-expensive form of motorsports racing,” Claudia said. The basics consist of a helmet, around $200 for a starter, and a starter kart around $3,000. However, helmets can range up to $1,000 or more and karts up to as much as $12,000, depending on the degree of customization, according to Claudia. “For instance, take tires—on other race cars they run $5,000 or more for a set of four, and ours are $250 for four. You can put together a basic recreational race-wear package for probably $600. It’s expensive, compared with other recreational sports, like skiing,” she said.

SIMA creates marketing packages for birthday celebrations, family reunions, bachelor parties, and corporate outings. One package is a Mini Grand Prix that includes race instructions, a 10-minute practice session, a 12-minute race, and a podium ceremony—all for $450 for 10 people (and $45 for each additional person). For $600, a group gets a heat race before the final race.

The patriarch, Claudio, is 72 and still going strong. He’s at the track daily, tinkering with engines and kart design, helping with construction, or whatever is needed. For the interview, he took a seat in the café on the premises (not just a burger and snack bar, but a full-menu café where he’s the chef on race weekends, producing full-blown Italian dinners) and he spoke of how this all came about.

“I came from Salerno to live with my sister in B.C. when I was 18,” he said. “Ever since I was 10 or 12, I loved working on anything that had an engine in it.” He came from a family of seven children; father was a carpenter, and mother an entrepreneur.

Once settled in B.C., he took a job at a company where “we built school-classroom chairs,” he said. At the same time, he became a machinist in a little shop at home and began racing in vintage cars—mostly Fiats—building his own engines and bringing home a slew of trophies and prize money. But when he married Beverly, they opened a European auto repair shop. From their savings, Claudio and Beverly began buying land in upper Whatcom County, with dreams of building a kart track.

Their interest in karts grew from a track that operated up the hill from their home in B.C. Michael became one of the top kart racers in North America before switching to Prototype endurance driving. He drove for about 25 years on contract with the Atlantic Lynx Racing Team. A few years ago, during a race, the brakes on a car behind him failed and the car rear-ended Michael, who already had been slowed by previous concussions. Injuries from that crash ended his driving career and he now oversees driver development at SIMA. He also helps design and calibrate engines on a $100,000 computerized Dyno-Test machine.

Claudia Carpentier never raced, but she went to Douglas College in New Westminster, B.C., and earned a degree in recreational therapy. The family’s specialty car-repair shop eventually transformed into a full-service kart shop, and the family passion for the sport grew. “We first tried to build a track in Bellingham, on the I-5 corridor,” Claudio said. “But too many people didn’t want it. They said too much noise, and the rabbits couldn’t survive, that kind of thing. So, after two years of trying, we purchased the land in Sumas.”

It proved to be a blessing for neighbors to the north. Canadians now cross the border at Sumas for more than gas and milk. They flock down to race karts. Celebrating its eighth anniversary this July with the SIMA Gold Cup, the weekend of kart racing drew 256 drivers from both sides of the border and hundreds more spectators and crew members.

With British Columbia’s Lower Mainland already intensively developed, Claudio has discovered that the west edge of Sumas, just a couple miles south of Abbotsford and the Trans-Canada Highway (Hwy 1), places SIMA well within an hour of karting enthusiasts in Vancouver and its suburbs, plus the untapped market of Bellingham and Whatcom County.

What lies ahead for Claudio & Co.? “My vision is to improve our existing track, eventually build a longer track and erect a grandstand. It’s hard to make this kind of investment and earn it back, but I can’t stop dreaming.”

Giving a leg up to those with disabilities

2019 Forecast: Slowdown But Not a Downturn

IKO roofing plant in Sumas serves markets around the world