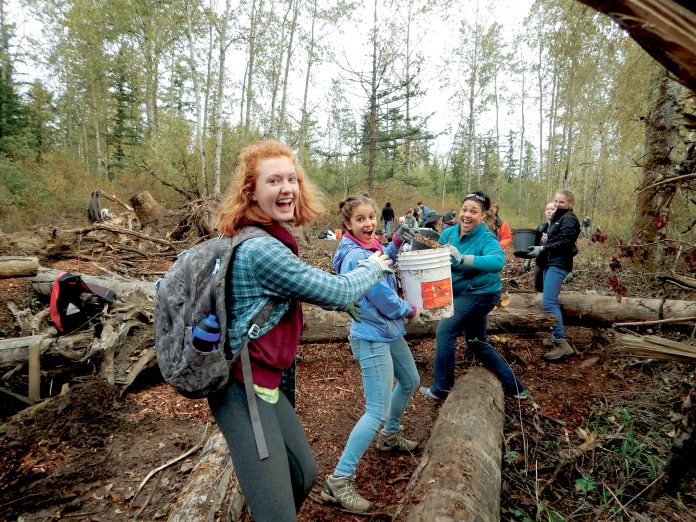 The Nooksack River cuts across the landscape of northwestern Washington State, its roaring waters winding through the North Cascades National Park, before snaking through the fields of Whatcom County. It has afforded valuable habitat for salmon, which have provided the region with food and nutrients since time immemorial. But since the arrival of European-descended settlers to the region, the human population has exploded, wreaking havoc on the fragile riverine ecosystem and threatening the very survival of salmon in the region altogether.

In response, the Nooksack Salmon Enhancement Association (NSEA) is working to reverse the environmental degradation by working with landowners to restore portions of the river to pre-colonial conditions.

“Our organization strives to recover salmon through restoration, education and stewardship.” says Rachel Vasak, Executive Director of NSEA. “All three of those balance.” Education and outreach play huge roles in NSEA’s approach to gaining support. “A lot of those kids that we reach out to then come back and help out with different work parties doing stewardship. They come back as interns and as Americorps members,” said Kate Underwood, Financial Manager of NSEA.

Funding a nonprofit organization is no easy task. According to NSEA’s website, it incorporated as a nonprofit in 1991 and eventually grew with the help of a 1993 Jobs in the Environment grant. Since then, the association has relied on federal and state grants to fund its restoration efforts. Foundation and business grants help cover the cost of outreach, education, and community building, Vasak said.

Even then, the funding from grants can be inconsistent. According to Underwood, sometimes NSEA won’t be awarded a grant that the finance team thought would be a shoo-in for approval. If grants fall through, then the organization must turn to whatever it has left to fill in the holes.  Hence, NSEA has been working to diversify its financial base by seeking more community donations and fundraising, Vasak said. But the funds can’t be used if there’s no habitat to restore, and much of the river and its tributaries cut through private land. According to Vasak, once a potential restoration site is determined, representatives from NSEA must get approval from the landowner before any action is taken. While many landowners are initially receptive, she said, some require a little more convincing.

“I’ve had more than a few people answer the door with a gun in their hands,” Vasak said, laughing.

Vasak said once both parties agree to restore the section of the river on the property, the landowners can be as involved with the restoration efforts as little or as much as they’d like. In this way, a spirit of cooperation between the two parties is formed and the door to future communication and improvements is left open.

According to its Annual Report, NSEA received more than $870,000 in government grants and more than $140,000 in donor contributions in 2018. And the organization began 17 new restoration projects and improved 15.3 miles of fish access to upstream habitat. More than 1,700 students from 30 schools participated in NSEA’s Students for Salmon Program. And some 32 work parties were held to help restore and maintain stream habitats.

NSEA currently is reassessing its short- and long-term objectives, Vasak said. Once those objectives are approved, the organization will expand and redirect its efforts accordingly. In the meantime, NSEA will continue its mission of restoring salmon habitat, educating the public, and enhancing environmental stewardship in the community.

“I think all we can do is try to create change,” Underwood said.

Have a PPP loan? Here’s what to do now

Regenis is Converting Manure into an Environmental Success Story