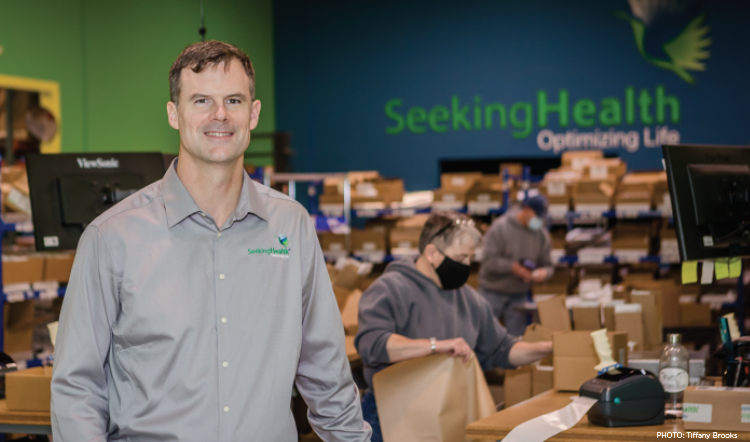 Company’s performance remarkable even before COVID-19

In an industrial park tucked away in a little-known area of Bellingham is a company that’s garnering national attention for exceptional growth.

Founded by naturopathic physician Ben Lynch in 2011, Seeking Health is on track to achieve $28 million in annual revenue for 2020, a 32% increase over the year before.
From 2016 to 2019, Seeking Health grew 43% in revenue. In 2015, it was the No. 1 fastest-growing company in the state, and 37th nationally, on Inc. magazine’s list of fastest-growing privately owned companies.

Seeking Health, which sells nutritional supplements and healthy living video courses online, made Business Pulse’s Top 100 list of privately owned companies in 2019 and 2020.
A lot of that growth came before COVID-19, which is delivering a boost to e-commerce in general.

How it happened
Lynch, the company’s owner and president, says Seeking Health’s growth results from this pattern: research, educate, create a new SKU, repeat. Profit generated by the new product goes toward creating the next.

“All the money I made, I put back in the company,” Lynch said. “Growing a business is a lot like growing a kid. It takes nurturing.”

Seeking Health formulates 90% of the supplements it sells. To create products, Lynch researches genetics, common variations and their function and dysfunction, and then he formulates supplements to support those genes. Seeking Health’s top 10 products include various vitamin supplements, including prenatal; probiotics; histamine blocks; and electrolyte powder.

The top 10 products account for 30% of the company’s diverse product line, said Adam Rustad, Seeking Health’s chief executive officer. The company of 28 employees currently has about 125 products, including items such as prenatal protein powder suitable for smoothies, and immune-support and anti-inflammation supplements.

“We don’t have a marketing department; we have an education department,” Lynch said. “I’m looking at known research. I’m just putting it together. Other researchers look at isolated variables. My system allows me to look at how it all works together.
“We are way ahead of where conventional medicine is today. We are ahead of research. Most people are not ready. You have to educate.”

The education part involves speaking to health care providers at conferences and to the public.

Lynch’s field is nutrigenomics, which is the interaction of nutrition and genes, especially with regard to optimizing their function and preventing and treating disease. He is the author of the 2018 book “Dirty Genes: A Breakthrough Program to Treat the Root Cause of Illness and Optimize Your Health.” The company’s online video courses include the Dirty Genes Summit, a 46-hour course featuring 50 health care professionals, and the Dirty Genes Course, which features Lynch speaking on his foundations of health: air, food, water, environment and mindset. The “dirty genes” name comes from the concept that genes perform jobs, and this can be negatively affected by stress, infections and exposure to pollutants in the environment, leading to symptoms.

Many of the company’s online video courses originated from recordings of Lynch speaking at conferences. It’s a good way to leverage assets, he said.

“If I’m going to spend months researching and creating a conference topic, I’m going to pay a videographer and make it into a course,” he said. “In med school, you learn that your brain is an asset.”

History
Lynch graduated from the University of Washington in biology, with the molecular and cellular option, before earning a naturopathic doctor degree from Bastyr University in Seattle and graduating as a doctor of naturopathic medicine in 2007. Naturopathic medicine is primary health care that emphasizes prevention and self-healing through healthy living and natural therapies, combined with current research.
He started his first online business, Healthy Goods, while a student at Bastyr. Healthy Goods sold such items as water filters, air purifiers, supplements, energy bars, essential oils and natural shampoo and toothpaste. When a supplier stopped supplying one of his products, lactase drops for lactose-intolerant children and adults, Lynch formulated it as his first product.

“I made it stable,” he said. “I made it better. It’s good for infant colic and lactose-intolerant kids and adults. We still offer it.”

Lynch, married with three young sons, ran Healthy Goods out of his garage in Bothell from 2007 to 2010. In 2010, he bought a 6,000-square-foot warehouse on Kentucky Street in Bellingham for about $500,000 with a loan from the Small Business Administration and moved his business north. In 2011, Healthy Goods had seven employees there.

“I’ve always loved Bellingham,” Lynch said. “I’m a big nature guy. Bellingham has the cleanest air in the nation. I wanted to own a warehouse, and I didn’t want to do that in Seattle.”

After Lynch sold Healthy Goods, his Kentucky Street warehouse was suddenly empty of products except for one row of shelves 6 feet tall and 15 feet long. “I was like, uh oh, what did I just do? When you have fears like that … I’ve learned to push myself in uncomfortable situations. Most of the time, it’s the right move, though it’s extremely scary.”

In 2014, after bringing it through three years of formulation, Lynch released what would be a pivotal Seeking Health product: Optimal Prenatal. The product came about from his research into a gene that is associated with myriad ailments. Optimal Prenatal contains the most biologically available form of folate, essential to cognitive development, and folinic acid, a form of folate that is easily converted within the body. “Both are superior, natural forms of folate,” Lynch said.

After launching the product, he started hearing from women who’d suffered from infertility and miscarriage but were now pregnant. “I started speaking at health conferences, then directly to the public,” he said. “Moms and dads would come up to me, holding their baby, and say, ‘This is a Seeking Health baby.’ That was really cool, seeing that.”

“I was looking at warehouses in Bellingham,” he said. “I kept looking at a building on Mercer (Mercer Avenue, off Marine Drive), but it was $3 million. I was terrified. I was debating whether I should sell (the business). One day, I made the decision to just go for it. I wanted to expand the prenatal line; I wanted to help more people. I felt Seeking Health could be my vehicle.

“I put an offer in on the building.”

The new 45,000-square-foot warehouse was half occupied by a tenant, who would remain. That half was clean and orderly. The half available to Seeking Health was otherwise.
“It felt like I walked into a 1950s Goodwill,” Lynch said. “The building was trashed. Garbage, old stuff, heavy equipment, lime green walls …” But Lynch thought they could transform it. Today, Seeking Health’s offices and warehouse, which include a gym for employees, are highly appealing.

In 2015, with 13 employees, Seeking Health landed at No. 37 on Inc. magazine’s national list of fastest-growing companies. The growth felt explosive, Lynch said. They didn’t yet have core values in place. Employees were hired via friends of friends or Craigslist, and Lynch felt he was scrounging to be efficient with expenses. But he kept reinvesting profits to research and formulate new products.

“That’s how we grew, since we were releasing quite a few new products that were doing very well for people,” he said. “We didn’t even have a marketing department. It was primarily word of mouth.”

Those seat-of-the-pants days are behind the company. Today, Seeking Health has 28 full-time employees and expects to hire more. There is a program called Optimizing Lives, which donates 7% of profits to good causes (most within Whatcom County) and pays employees for 20 hours of community volunteering. There is a mission statement and a BHAG (Big Hairy Audacious Goal, a term coined by a business author, pronounced bee-hag) of reaching $50 million in revenue by fiscal year end 2023.

Judging from this company’s track record, they are likely to make it.