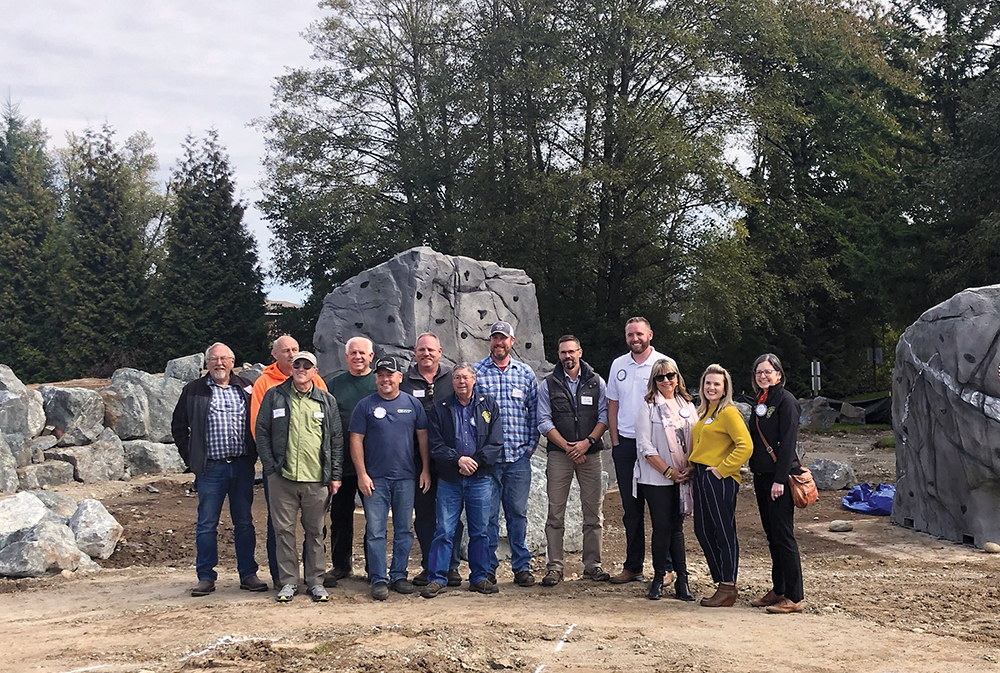 A local community-service organization that has contributed much to Whatcom County is creating a $300,000 sports-park-within-a-park at Lynden’s Bender Fields.

With generous donations from numerous Whatcom County businesses and individuals, the Lynden-based Mount Baker Rotary Club broke ground in September on the project. When finished next Spring, it will include three climbing boulders, two basketball courts, four pickleball courts and a sand volleyball court.

“Everybody likes something about this project,” said Jeff Roberts, President of the Mount Baker Rotary Club.

The Lynden Regional Parks & Recreation District, the government entity that owns Bender Fields, also pledged $25,000 to fund a third climbing boulder that will add another challenging element for climbing enthusiasts in Whatcom County and British Columbia.

Each club president typically leads a project during their one-year term. When Roberts recalled one of the club’s most popular contributions, the Million Smiles Playground at Lynden City Park, he noted its appeal to young children, but added, “There’s not enough for the older children and adults to do.” There’s plenty now. After announcing the concept on April 15, Roberts said the donations and efforts of club members made it possible for the climbing boulders, pickleball courts and basketball courts to be used by mid-October. Lighting and lines will be added to the sand volleyball court in the Spring.

Mount Baker Rotary Club didn’t take the cheap route, either. The first two man-made climbing boulders were transported from Colorado. One weighs 18,000 pounds and is 10 feet high, while the other weighs about 10,000 pounds and is nine feet high. Two of the basketball courts will have deluxe outdoor surfaces, breakaway rims, and glass backboards.

“These are going to be the nicest outdoor basketball courts in Whatcom County,” Roberts said.

All of this is occupying just one acre of the 56-acre Bender Fields complex, centrally located in Lynden and used by youths and adults playing soccer, baseball, softball, lacrosse, cricket, and bocce ball. Backers of the project say it will be ideal for families. When one family member is playing an organized team sport, others can engage in individual and informal activities at the sports park. And lighting will extend the time that the park can be enjoyed.

Donations still are being sought to add park benches, picnic tables, and landscaping, Roberts said. To make a donation or learn more, visit mountbakerrotary.com or the club’s Facebook page.