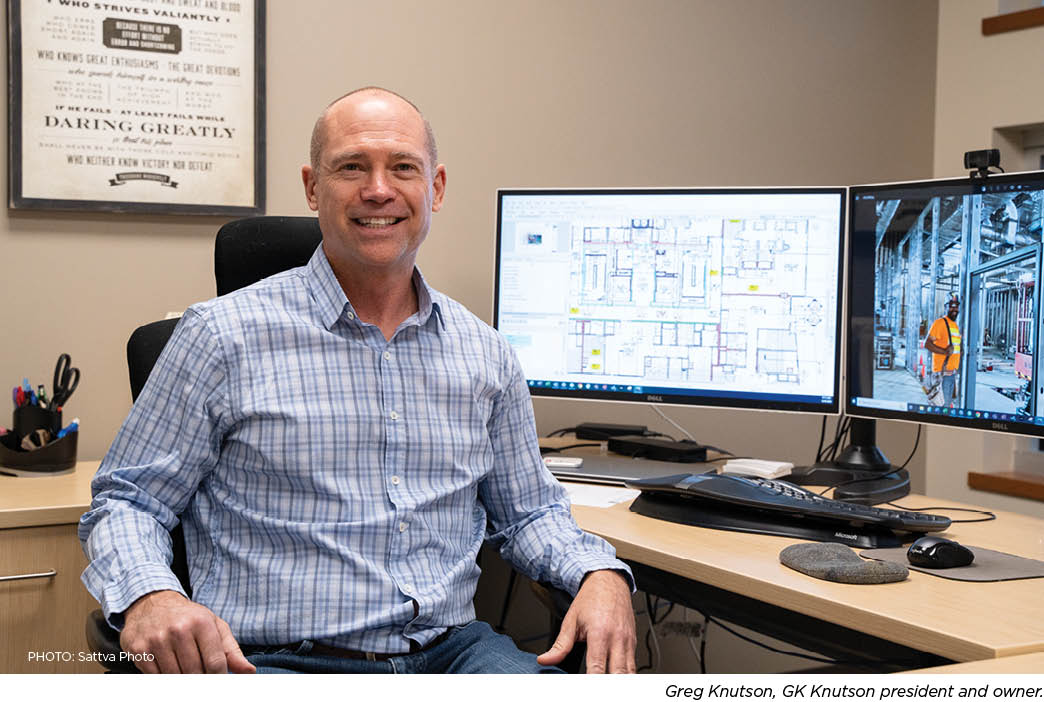 With worker shortages, turnover, union tensions and ongoing supply chain challenges, American workers are switching to — or holding out for — jobs with companies that walk the talk when it comes to a positive work culture. They want companies that acknowledge the whole employee, including their need — or demand — for a quality life outside the office.

Javier Sampedro, director of operations for the past two years at GK Knutson Metal Framing & Drywall, nominated his boss, Greg Knutson, as an example and role model for modern leadership. “This family-owned, local company has run for many years from Ferndale, and Greg’s vision, values and goal are to find work for families at Whatcom County, not to just be the rich guy around town,” said Sampedro in an email to the magazine in November. “I have had the pleasure of working with him daily, and he is a role model for every leader in the company. He cares so much about employees that we should all learn from Greg to treat workers well.”

GK Knutson, a subcontractor specializing in metal frame construction, drywall, insulation and acoustical ceilings for more than 25 years, works on construction sites from Olympia to Blaine.

The second sentence of the company’s mission statement speaks volumes about the company’s focus: “Our business is based on strong family values and the desire to provide a safe, satisfying and supportive work environment, where every member of our team is valued and appreciated.”

From humble beginnings
“One of the things that shocked me about this company is that they began as a small, family-owned company,” Sampedro explained, “and even though they’ve grown to an average of around 100 employees, they still have the values of a family environment in the office. We have titles, but there is no barrier or wall between workers and management. Everyone is nice, and they try to help each other.”

Knutson asserts that the company was born not in the pursuit of profit, but in his roots working for other small, family-owned businesses.

Knutson, born and raised in Ferndale, had parents who were an active part of the community. Knutson’s father, Tony Knutson, worked for the Ferndale School District. His mother, Virginia Knutson, ran a small construction business, with help from her sons, under the name Knutson Drywall. Knutson first moved with a friend from high school to Arizona to learn the drywall trade. After three years, he moved back to Washington, where a couple of his brothers also were learning the family trade.

In 1997, Knutson and his wife, Kristi, went out on their own to found their own drywall business, GK Knutson, where Greg serves as president and Kristi as vice president. The company, which originally worked in residential single-family homes and some commercial buildings, was housed on Pacific Street in Bellingham for about 14 years.

“We flew under the radar for many years,” Knutson said, “but over time we transitioned into a lot of commercial work, apartments and mixed-use residential work. We’ve grown pretty conservatively over the last 25 years, with a conscious effort to avoid the problems that come with growing too fast.”

That growth was never driven by sales and revenue, Knutson said.

“It came from working alongside my workers,” he said. “We started off with 10 people showing themselves as leaders out in the field, building the projects. So, our business focused on keeping those people busy leading. Then they trained someone to run projects, so we wanted to keep them and their crew busy, too. That drove us to find more and more business. And here we are.”

Shelly Brockett, GK Knutson general manager, has been with the company for more than 24 years.

“Part of the culture here has been that there have always been opportunities for growth and to move into leadership,” she said. “We do a lot of promoting from within, so our leaders started by working shoulder to shoulder as just one of the guys before they rose into roles of responsibility. It was about six years ago that Greg started to look at and talk to them differently as he started to depend on them to carry his values and vision into the field and convey that to all the work crews. It’s who we are as a culture and a team that makes us special.”

Helping the employees see themselves as leaders has been an important component of the process, Knutson said.

“We’ve really encouraged our employees to view themselves as confident professionals,” he said. “I’ve been that guy spreading mud for a living, thinking it’s just work. But I still remind myself that we aren’t just a bunch of drywallers. We are leaders, providing a vision and presenting ourselves as the professionals we are, working with general contractors managing $10 million projects.”

A human-centered management approach
Many businesses felt a slowdown in the third quarter of 2022 in conjunction with the economic climate.

“I definitely think we are still coming out of COVID,” Knutson said. “Projects have gotten delayed, start dates have been pushed, budgets need to be revisited because of rising costs and inflation. The cost of construction went way up, and now we’re dealing with rising interest rates.”

But GK Knutson’s commitment to keeping workers employed is about much more than their bottom line.

“One of Greg’s main goals is to keep employees busy with work so they can support their families,” Sampedro wrote. “From personal experience, I can tell you that I saw him losing money in order to keep families working during COVID. I don’t know that a larger company would do that for their employees. It is very brave to do that. He lost money keeping these families safe. His choices were good for everyone.”

Knutson was humble about that sacrifice.

“I really feel like our people have my back,” Knutson said, “and so that’s how I can give back to them, always trying to have work out in front of them.”

“We are union,” Sampedro wrote. “We pay people really well, by the law and the rules, very open book. Greg is a safety leader. And when we don’t have work for our guys, we try to find them temporary work with other companies. Not many companies do that. We care that they can continue to pay their bills and have work and hopefully come back to us when we do have work for them. That is not the same at other places I’ve worked.”

Brockett emphasized that the major goal for 2023 is to have enough work to hire back all of the team members the company had at its peak in early 2022.

Acknowledging that workers have lives outside the office
GK Knutson didn’t deliberately set out to create a positive work-life balance within the company. It just happened.

“When I was raising my kids,” Knutson said, “in the thick of all that, my kid was sick, and I needed to be home, or I needed to leave early on Friday to go see them play in a basketball tournament in Port Angeles. I know I am going to go do that, and I encourage our people to go, too.”

Knutson believes workers should enjoy the same privilege of being there for those important moments that he enjoys.

But Knutson also acknowledges that not all workers in the construction or other industries get that privilege.

When asked if the company had noticed an increase in demands from employees for more flexibility post-pandemic, the answer was clear from Brockett: “No, because we were already so flexible to start with,” she said. “I worked a few other places before I started here, and I know that what we have here is exceptional. Our culture is not the norm, and I hope nobody ever takes it for granted. We’ve had a few new teammates who have had a little struggle adapting, because they came from places that were very restrictive and micromanaged. It takes them a bit to step into the ease and the comfort and the trust that is automatically granted here.”

Brockett said she thinks this approach is important for employee satisfaction.

“We give them the flexibility to come and go and live their life,” she said, “and not have this job be all that there is to them. They have a whole life outside this business that we try really hard to support. While Greg and Kristi were raising their kids alongside this business, so was I, and I was able to have a great job and still have the flexibility to be at every game and school play when my kids were growing up. That was a huge blessing and a huge gift.”

On diversity, equity and inclusion and giving back
“In the office staff, we have at least as many women and there are men, which in construction is saying something,” Brockett said. “In the field, we have more Spanish-speaking and bilingual workers than those that speak only English. It has been such a gift to have Javier be able to go out with them and speak with them in Spanish, because it affords them a greater level of comfort and understanding. That means they’ve sometimes been able to share things with him that they otherwise might not have been comfortable sharing with someone only in English. Misunderstandings can be avoided, and everyone is safer.”

Employees have the opportunity to learn from each other.

“We also try to offer a safe environment where native Spanish speakers can learn and practice their English to better communicate with our English-speaking general contractors,” Knutson said.

The company also prides itself on giving back to the community.

“We have donated quite a bit of money to the Lighthouse Mission and labor to Habitat for Humanity,” Brockett said. “On a smaller scale, we monetarily support small local charities and nonprofits, like Ferndale High School, The Sofia Milstead Foundation and Encompass Northwest.”

When asked what his favorite thing about working at GK Knutson was, Sampedro replied: “I especially appreciate the freedom here to learn and ask questions. Greg Knutson is a leader from the office to the field. It’s pretty common for the owner to sign the check but people don’t know him. Here, people know him and love to see him. He connects with them, and not everyone will make it a priority to do that.”