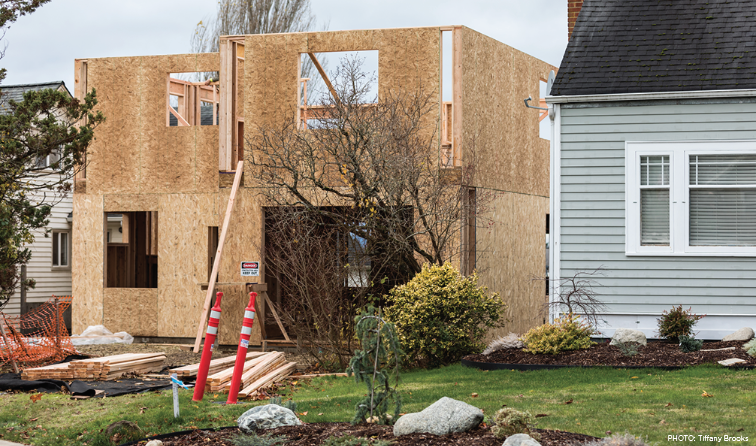 Farming, tourism, the arts, the Cherry Point Industrial Zone and nearly every other pillar of the Whatcom County economy has suffered a grueling year. However, two industries have thrived: toilet paper and residential real estate.

The demand for toilet paper is a little hard to explain. The demand for homes in Whatcom County is not. The pandemic and resulting stay-at-home orders freed thousands of white-collar and tech workers to live wherever they wanted to. Since last March, many of those Seattle, Portland and California workers have chosen Whatcom County. The effect on prices and inventory has been dramatic.

“In the real estate business, this year has been like no other,” said Mike Kent of Windermere Real Estate and Mike Kent Real Estate Sales & Marketing. “This has been the most unpredictable year in the 22 years I’ve been in the business. Initially, most experts thought COVID-19 would crush the residential real estate market, and we saw an initial freeze in the first 30 days of the pandemic. However, after those 30 days ended, we immediately began seeing buyers gravitate to Whatcom County. While our housing costs are at historical highs, we are still a far more affordable market than Seattle, Portland and San Francisco.”

Perry Eskridge, executive officer and government affairs director at the Whatcom County Association of Realtors, also emphasized the impact of out-of-area and out-of-state buyers.
“The regionalization of the West Coast real estate market has become a driving force in Whatcom County,” Eskridge said. “Buyers traveling from Everett and Seattle to look at houses in Ferndale is now the norm. Further, we know Whatcom County has become a desired destination for California- and Seattle-area tech workers who are unlikely to return to the office once the pandemic is over.”

Skyrocketing housing prices are not just the result of additional demand. Whatcom County has always been a desirable place to live. Prices have reached record highs because housing inventory is also historically low.

“Right now, we have about three weeks of housing inventory,” Kent said in early December. “That means that if no new properties entered the market, we would sell all the listed properties in three weeks. A healthy market should have about six months of inventory. A limited amount of supply coupled with enormous demand will always send prices higher. It is Economics 101.”

While the conversation around housing and public policy often focuses on the homeless, the city’s notoriously flawed planning process has priced out much of Bellingham’s workforce, including teachers, first responders and other essential employees. In a deep irony, a city with an approach to governing that prioritizes inclusiveness has maintained policies that have made the city progressive and exclusive — and progressively exclusive. As housing stock dwindles and prices climb higher and higher, the city has made home ownership a nearly impossible dream for much of its own community.

“The median home price in Whatcom County and in Bellingham are both out of reach for the average household income in those communities,” Kent said. “If you’re a kid who grew up in Whatcom County and are now a young buyer who wants to stay close to family, it is harder and harder to find a home you can afford. This county’s market is a challenge for first-time buyers.”

While the county and the city have made homelessness a priority, a lack of workforce housing is almost impossible to solve without building more homes. As of this writing, there were 248 homes available in all of Whatcom County. There were 448 homes on contract. As long as demand outpaces supply, prices will continue to move up. The shift to remote work will, in many cases, remain permanent — and Whatcom County prices have a long way to go before they are comparable to California, or even Seattle and Portland.

“It isn’t just price,” said Eskridge. “The quality of life in Whatcom County is exceptionally high, and many buyers are leaving some of the other challenges and uncertainties they experience in the larger metro areas on the West Coast for our slower pace and relative calm.”

Every local real estate expert and economic leader interviewed for this article predicted demand for Whatcom County’s minimal housing stock will continue for the foreseeable future. Low housing availability could have the potential to unite real estate professionals and progressive groups and voices that have significant influence in the county.

“As a member of this community, it is important to me that the firefighters and police officers of this community can afford to live here,” said Barbara Chase, executive director of the Whatcom Business Alliance. “The first step in having a real discussion about housing is to increase supply. We do not build nearly enough single- or multi-family housing units in this county. As long as we are the more beautiful, cheaper, higher-quality-of-life alternative for Seattle and San Francisco tech workers who can now work from home, our prices will continue to escalate. If this community really wants a housing policy that promotes inclusivity and diversity, we must build more houses. It is that simple.”

Practically, Kent has some advice for first-time buyers trying to find a home in Whatcom County.

“First-time buyers need to accept that they aren’t purchasing the home of their dreams. It’s OK to buy something without granite counters and hardwood floors,” he said. “Additionally, and this might sound counterintuitive, but prices are escalating so fast that buyers who are trying to save for a down payment will be outpaced by the market. If you are a first-time buyer, contact a mortgage broker. There are a surprising number of options for buyers who have little-to-no down payment.”

The hot Whatcom County pandemic-era real estate market is a mixed blessing. Home sellers have extraordinary power in the current market, and the real estate industry itself — including agents, brokers and bankers — is an important part of the local economy. Commissions and fees aren’t just income for agents, brokers and bankers; when agents and bankers are local, that income cycles through the local economy. A small portion of every local agent’s commission eventually makes its way to the county restaurants and small businesses that are struggling to survive.

However, the housing market in Whatcom County is a vivid illustration of a series of policy choices that, while well-intentioned, can create a disaster for working families.
The stay-at-home orders intended to minimize the impact of the pandemic have helped create a class of wealthy workers earning San Francisco and Seattle salaries from their living rooms.

Like anyone would, those workers looked around to see if they could find cheaper living rooms in other beautiful places that had the added benefit of having less traffic and fewer people. They found Whatcom County, a beautiful community that strives to maintain its specialness in part by limiting new development.

The result of that limited development is a market with too little inventory that is rapidly becoming affordable for only the privileged — but because that community has grown increasingly attached to a specific political ideology that is distrustful of business, it rejects the most foundational component of any affordable or workforce housing policy: an inventory of actual houses, built by the private sector.

One thing is certain, though: Despite (or maybe because of) the pandemic, Whatcom County’s housing market is hotter than ever, and if our community wants to become more inclusive, it must partner with the private sector and identify ways to increase single- and multi-family housing stock — before Whatcom County becomes a bedroom community for the rest of the West Coast.