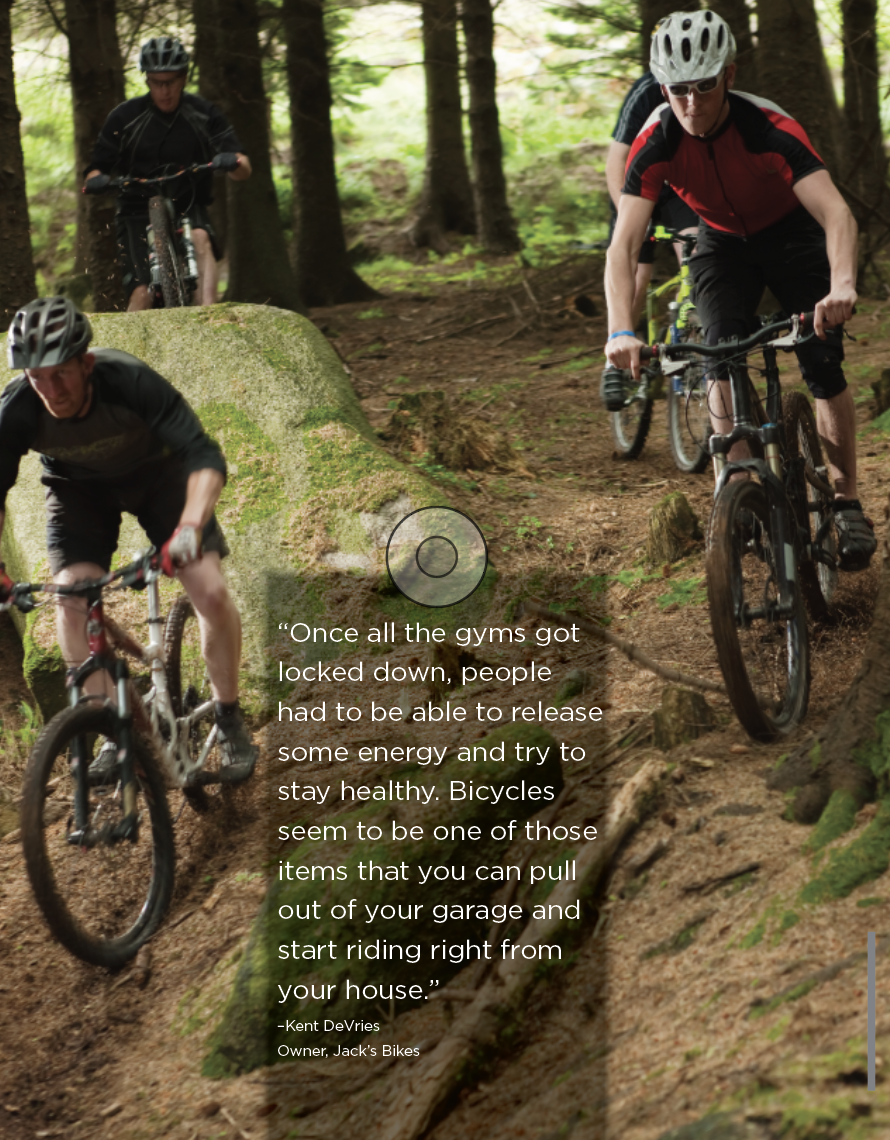 Over the past 12 months, we have had to learn how to live differently. In a moment, life changed, impacting how we worked, lived and played. Everyone adapted to new regulations at work and school (both of which, for many people, were now at home). Vacations were canceled or changed, and routines were adjusted as we found new ways to work out with gym doors closed. Gathering with friends and family went from meeting at favorite restaurants to interacting outside at a safe distance, if at all.

At first, people holed up at home, not quite sure what to do and fearing an economic collapse. What happened was much different. While some businesses struggled to stay afloat or had to close permanently, many thrived as people changed habits and adjusted to a strange new world.

Unable to gather inside, people have taken to the outdoors, creating a boom in the recreation industry. According to the National Park Service website, national parks saw a dip in numbers in the first half of 2020 due to the long period of time during which they were closed. As parks reopened in the second half of the year, crowds swelled as people ventured out on the open road in search of outdoor adventure as a reprieve from being shuttered in place.

Locally, we saw similar trends. The year started out as expected, followed by a large dip in the second quarter as businesses were forced to shut down. As the world slowly reopened, local recreation soared. Trails were packed, and everyone was in search of ways to enhance their outdoor adventures.

Since opening in 1969, Jack’s Bikes in Bellingham has never experienced business like it’s had over the past year at its store on Iowa Street. Due in part to its proximity to the popular Galbraith Mountain trails, mountain bikes have been in demand. However, it really hasn’t seemed to matter what type of bike it is; everything owner Kent DeVries can get his hands on is selling.

“With the bike industry during COVID-19, the production and manufacturing of bikes was stopped, and all of a sudden it became a task to get bicycles,” DeVries said. “A lot of bicycles weren’t even available if you hadn’t ordered them four to eight months ago. And it’s all over the board: Kids’ bikes, basic mountain bikes, more expensive mountain bikes, hybrid bikes, electric bikes — just about any style of bicycle is selling.”

DeVries chalks up this demand, in part, to people wanting to get out and do something. It’s also due to a change in exercise habits, he said.

“Once all the gyms and stuff got locked down, people had to be able to release some energy and try to stay healthy,” DeVries said. “Bicycles seem to be one of those items that you can pull out of your garage and start riding right from your house.”

The rental industry has been booming as well. With people able to come in and rent a bike and helmet to go enjoy the area’s world-class mountain biking, that side of his business has never been better. Most of the people renting bikes are from outside the state, and many have been drawn to the area specifically for the biking it has to offer. DeVries said he expects the high demand for bike sales and rentals to continue through 2021.

The desire to get out and explore has created a similar scene in the camping arena. Campgrounds are seeing high rates of bookings, and according to Dave Andrews, general sales manager at Camping World of Burlington, manufacturers can’t keep up with demand for campers. This scenario of low supply and high demand has had people coming from King and Snohomish counties and even from outside the state in search of campers. It seems people are trading in their frequent flyer cards for camping vehicles.

“Due to current low interest rates and current events, the demand will remain high,” Andrews said.

While some of these purchases are large, access to inexpensive money means that getting into a camping setup is more attainable than before. Plus, campers can give people flexibility regarding where and how they travel.

As people look to get out and explore, many are opting for the van route as opposed to the more traditional campers. This timing ended up being fortuitous for Ken Carr and Ryan Johnson, who have partnered to build custom vans. The shutdowns hit just after they’d started Carrve Custom Vans in March 2020. That was a scary moment, as both had just quit their jobs to pursue the business. As it turned out, the COVID-19 pandemic would be a plus for the business, as more and more people were looking for options to get away. The vans offer the ability to get even more remote, allowing users to get way off the grid.
“People coming to Carrve Custom Vans are looking for a functional, durable van that looks good, which is what we specialize in,” Carr said.

This clear deliverable has people coming from all over to work with the tight two-person team. While customers started off local, Carrve is now working with people up and down the West Coast, with interest coming in from across the country.

An unexpected aspect of the van buildouts has been getting people set up to work remotely. With fewer people physically going to the brick-and-mortar office, a recreation vehicle can now be an office on wheels. This large demand has the Bellingham-based team currently booking into the fall for new orders, and they expect this trend to continue.

It is hard to predict what the future has in store, but what seems to be certain is that the region’s opportunities for outdoor recreation will continue to get locals out of the house and attract those from outside the area wanting to join in on the adventure, spurring continued growth for businesses that support these endeavors.