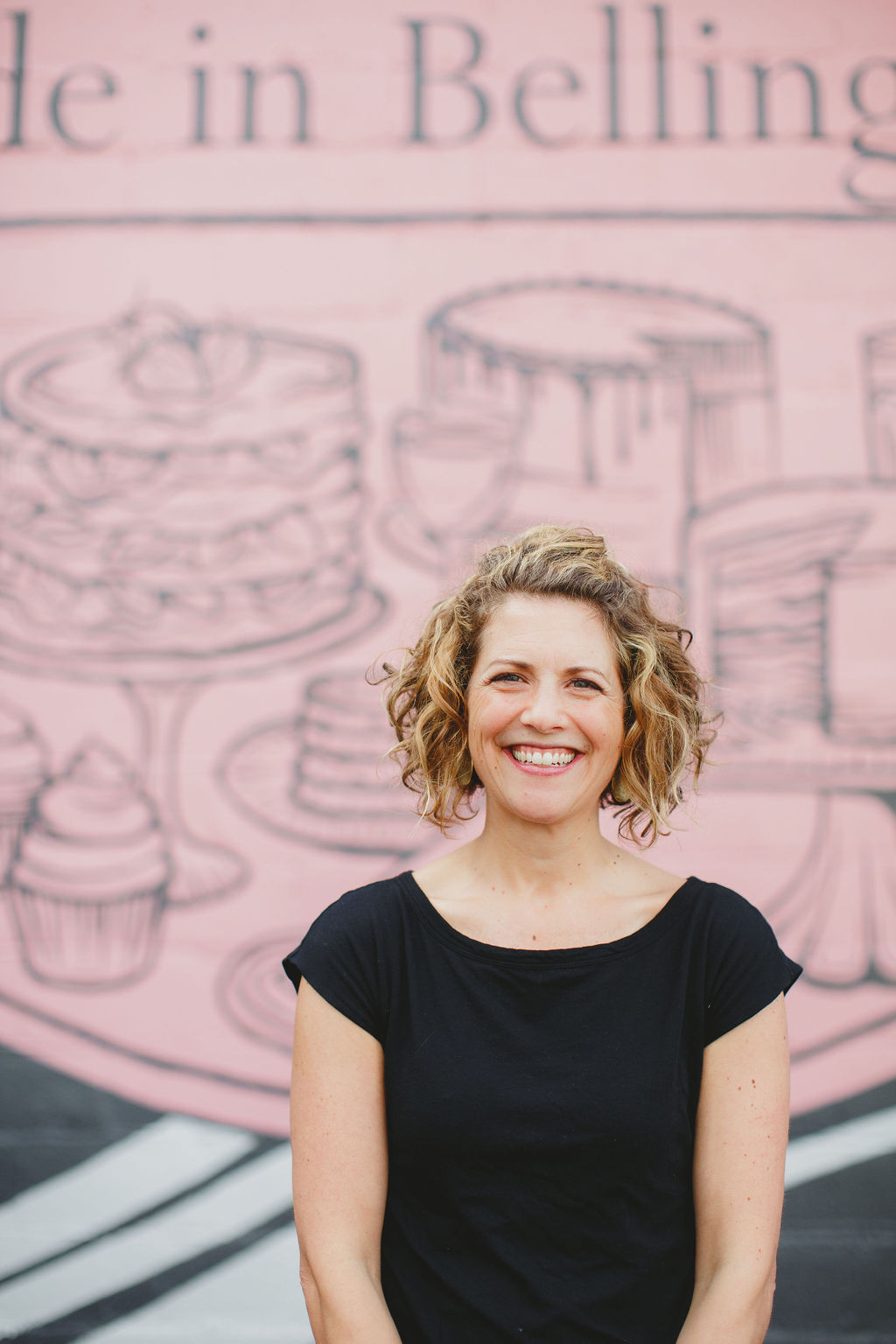 The first thing you notice about Pure Bliss Desserts in downtown Bellingham is how beautiful it is, from the hand-painted mural on the building’s outside to the elegant cakes within. The seating area of tables and chairs includes couches upholstered in rose velvet, a theme repeated on the company’s appealing website.

It all looks effortless, but the story of PBD — born as a one-woman show in a little back-alley rented commercial kitchen in Bellingham in 2008 — is one of hard work. Andi Vann, a 2003 graduate of Western Washington University, had put a lot on the line even to get to that beginning.

In the mid-2000s, she was living in Bellevue, using her new psychology degree while working for a firm that taught people skills to other businesses. But every day after work, she went home and baked. And baked.

One day, she was standing in the check-out line at Fred Meyer in Bellevue, her cart full of baking supplies, when a young man noticed her WWU shirt and struck up a conversation. Turns out, he’d graduated from Western the same year she had.

They got married 18 months later. Still in Bellevue, she couldn’t stop thinking about how she wanted to quit her day job and bake cakes all day.

In the beginning
So, she did. She sold her condo, and in 2007 the couple moved back to Bellingham. No one was hiring bakers, so Andi got a job as an event coordinator for a local wedding designer. At the same time, she started baking preordered custom desserts in that rented kitchen. She’d schlep her ingredients over there, bake and decorate, tidy up, return everything to her car, and deliver her product.

“I was spending seven hours making one cake,” she said of that time.
As her cake business grew, Andi learned that Anchor Café, at 1424 Cornwall Ave., had an available storage room in back.

“I thought, I can convert that into my own commercial kitchen,” Vann said. “All my products and equipment in one place.”

No loans, no employees, just Andi and Nick, driving around acquiring Craigslist equipment for her new sublet space: one 20-quart mixer, two 6-quart mixers, a commercial-grade oven, and an expanding collection of pans and bowls. Meanwhile, Anchor Café out front faltered, then closed.

The landlord offered the café storefront to Andi, and in June 2010 she rented the space. It was dark and dingy, with a yellow/red color scheme, but her father had a home repair business and husband Nick was handy.

She drove to Canada to buy the vintage couches from a private seller. Cabinets came from The RE Store, the wedding designer donated black chandeliers, and someone provided an espresso machine.

After a summer of permitting and remodeling while still baking custom orders, Andi opened her store for Pure Bliss Desserts on Oct. 26, 2010, with two other employees. The workload hit overdrive.

“I’d wake at 4, bake from 5 to 10 a.m., then train whoever was working alongside me while serving customers, spend an hour doing administration, then back to the kitchen, complete the baking, frost and cut and garnish, then back out front, and close the shop at 10 p.m.,” Vann said. “I’d get home at 11, go to bed, and wake up and do it all over again.

“All the things I’d dreamed of since middle school, it came alive! I couldn’t believe it.”

Growth, and more growth
Andi and Nick (both are co-owners) lived and worked by this philosophy: “Quality speaks for itself; use the best ingredients to yield the best desserts.”

With growth came more work. Andi found herself grabbing the occasional nap using a bag of flour for a pillow. She stepped up hiring, including Amber Sturgis, cake decorator, and Ann Hoag, full-time manager/baker. In 2014, Andi gave birth to a daughter; three weeks later the new mother was back in the kitchen, her infant napping on a sheet tray.

With a newborn, and with husband Nick gone 24 hours at a time working as a firefighter, Andi could no longer pull hundred-hour workweeks.

“That was a pivot point for me, delegation and trusting,” she said. “Whether I’m here or not, my team is still doing the same good work.”

Pure Bliss had about 15 employees by then. Workspace was tight, and they desperately needed more refrigerator space. With no dedicated office, Andi carried her laptop around with her. When a thrift shop next door closed, in 2014 Andi scored a sliver of that space — 200 square feet for extra seating for customers.

“That was our first add-on,” she said.

In 2016, she was able to move her office into the building’s upstairs.

Buy, don’t rent
Meanwhile, the WWU Small Business Development Center had been coaching her to buy, not rent, her next building. (Eric Grimstead, senior certified business adviser, has advised Andi since PBD’s beginning in 2008.)

In 2017, the building’s landlord offered to sell Andi the whole building. She and Nick finalized a Small Business Administration loan on May 1, 2018. With Chuckanut Builders, they launched an ambitious plan to remodel one half of the store, then the other, and finally join the two, accomplishing months of major work while staying open for all but 10 days of that whirlwind time.

The remodel (May 2018 to March 2019) expanded PBD from 2,100 square feet to 5,500, delivering more seating and more desserts. This led to more customers, which led to more employees. PBD now had an 8-foot-by-9-foot walk-in refrigerator and individual workstations for bakers.

To understand the scale, realize that butter comes in 1-pound bricks packed in a 30-pound box, and PBD has 15 of those boxes on hand at a time. Same for cream cheese. Eggs come in a crate of 15 dozen, and the bakery usually orders 15 crates per week.

“It’s a wall of cream cheese, eggs, and butter; we have whipping cream and buttermilk and citrus,” Vann said.

With the remodel, Andi and Nick preserved the look that they had created with their Craigslist budget back in 2010, but now it was polished and refined, with double the seating capacity, the handsome vintage couches freshly re-covered, and an increased variety of cakes.

“Then COVID happened, and I cried,” Andi said. “We’d just done a gigantic investment, and everyone had to stay home.

“We didn’t forget our mission to spread joy,” she said, adding that PBD got some of their best customer thank-you emails during the pandemic. “That was invigorating.”

PBD kept a skeleton crew, with the others paid via federal loan to stay home for eight weeks and wait for the pandemic to ease. PBD offered fewer cakes. Customers stood outside to eat their slice or took it home, as PBD grappled with ever-changing mandates of 25% occupancy, or 50%, “then close it altogether — over Valentine’s Day!”

Vann credits her team and customers for PBD’s success.

“A team makes a business work. I’m so grateful to them. And my faith! Sometimes I’m like, ‘God, I don’t know what’s going to happen today, but help me prepare for it.’”
Of PBD’s current 36 employees, 14 are full-time.

“I love figuring out how to make this place the best it can be,” Vann said. “I love growing young adults into polished professionals.”

“Eric (Grimstead, WWU SBDC adviser) told me in 2008 to line up my personal goals with my business goals. I want my philosophy to be lived and breathed within these walls. I want to pour that into our two children as well.”

Doing it well
All that informs what’s ahead for PBD. “No more locations,” Vann said. “I’m super thankful for this location.

“What would I love? Stability from month to month, building the bridge back to our community, so our team can keep their paychecks and our doors can stay open.”

Here, Andi paused and looked around the elegant shop and over the tiered array of cakes, including chocolate salted caramel, red velvet, berries and cream, creamy coconut and lemon bliss.

“We do this really, really well,” she said.

She paused, nodded, smiled and headed back into the kitchen. ■