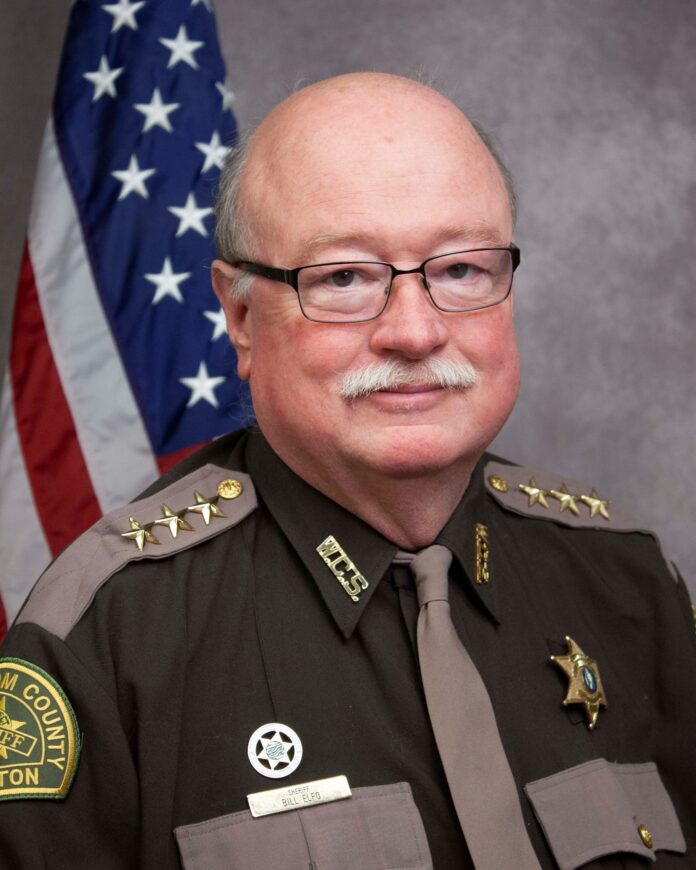 Sheriff Bill Elfo has led the Whatcom County Sheriff’s Office for nearly 20 years, beginning in 2003 when stepped in as interim sheriff. He was elected to office later that same year and is now serving his fifth term. He started his law enforcement career in Florida and came to Whatcom County in 1996 as director of the Blaine Department of Public Safety.
In his 48-year career in law enforcement, Elfo says he has never seen anything like the lawlessness the county has been experiencing over the past several months. He cites some of the recent criminal justice reforms as one cause, but the reforms make up only part of the challenges law enforcement faces today. Here, he addresses some of those challenges and provides guidance for business owners and operators.

Q: Criminal activity seems to be on the rise. What’s going on?
A: I think everybody has experienced it, in the unincorporated areas and in the cities, particularly the business community. I’ve heard from business owners who’ve called me regarding people getting out of jail too soon or not being held in jail for shoplifting offenses. They’re noticing more profoundly mentally ill people out on the streets and people using drugs. Some of them are dangerous, and some of them engage in criminal activity, and we’re also seeing a skyrocketing crime rate.
Criminals have free reign. Mentally ill people have free reign. It’s really causing our society to be immersed in chaos and lawlessness. It’s far less safe than it was just a few years ago. I speak to a lot of groups and a lot of individuals, and people of all persuasions are really starting to notice this issue.
I’m not a sociologist, and I can’t tell you everything that causes crime, but I did look at laws that went into effect (last July) — the so-called reform of the police and narcotic-related laws. We did a sampling six months before they took effect and six months after: Felony assaults are up 54%; burglaries are up almost 71%; vehicle prowls are up almost 74%. Vehicle thefts are up an astounding almost 116%. Other categories are up as well, such as arson and homicide, but those numbers are too small to make a meaningful comparison.

Q: How does space at the jail figure into this issue?
A: We’re seeing the same people in jail over and over again. Part of the reason is the jail lacks the capacity to hold people, and we’re experiencing serious infrastructure problems. This is not a new issue but has persisted for decades and is now at a crisis point. COVID requirements for social distancing further limit space.
The courts closed due to COVID, so a lot of people are backed up waiting for their cases to go to trial and be resolved, and we’re having increases in the jail population due to that. For people who need determinations of their competency (to stand trial), that process is taking months, if not years, to get the evaluations completed. We have one case we’ve finally resolved; he’s been sitting in jail since December 2018.We have very limited space, and what we need to do, from my perspective, is resolve this jail issue as quickly as possible. Not only do we not have sufficient space to keep people off the streets, as we’re legally required, but we’re also not serving arrest warrants for a lot of property crime because we have no space to put them.There are people concerned about mass incarceration — a legitimate concern — but I don’t think we have mass incarceration here. We have an obligation to operate the jail in a safe, constitutional and humane manner.

Q: One of the legislative reforms made last year involved the ability to stop and/or pursue individuals suspected of criminal activity. Can you update us on that legislation?
A: I think this legislation, even though there’s been some modifications to it, has really hamstrung law enforcement and our ability to prevent crime, investigate crime and capture criminals. They eliminated Terry stops — our ability to stop people reasonably suspected of committing a crime for a brief interview to determine if criminal activity is afoot. We were the only state in the country where that was eliminated, and that’s tying officers’ hands unless they have probable cause to arrest someone. That issue has been somewhat fixed, but not completely, in the last legislative session.
If someone breaks into your home, even if we have probable cause, if they flee, we can’t pursue; they’re free to go. If they’re driving a stolen car, we are not allowed to pursue them.
Vehicle pursuits are an ultra-dangerous activity, and we take it very seriously. We have sound policies in place. We train all officers in vehicle pursuits and we train them in alternatives to pursuit and pursuit intervention. What the legislature did, they precluded us from engaging in pursuits unless we have probable cause. That’s a higher level of proof than reasonable suspicion.

Q: The state’s drug possession law also changed last year. What has been the outcome of that change?
A: In February of last year, the (Washington) Supreme Court declared all drug possession laws unconstitutional because the word “knowingly” didn’t describe possession, overturning their original ruling in 1958 that “knowing” wasn’t a requirement. The Legislature addressed this decision by changing all the drug possession laws from felonies to misdemeanors, adding that we can’t arrest individuals unless we give them at least two referrals to treatment. And they didn’t provide adequate and meaningful options for providing treatment. What we do now is give people a phone number they can call to get on a waiting list for treatment. It’s really sad. Previously, we would find people who were exposed to opiates or fentanyl, and we could get them into jail, and they’d get medical screening and medical intervention if necessary and, in some cases, prevent them from dying. We’d offer programs at the jail, medically assisted treatment, programs through the county, drug court. That doesn’t work anymore. We leave them on the street. We can’t book them because of the restrictions in the law and the lack of jail space. That’s a law the Legislature wouldn’t revisit last year, so it remains the status quo.

Q: After high-profile cases from around the country, policing has been under a microscope. What’s your take on this?
A: I listened to a lot of the testimony on the police legislation (this legislative session). They try to take issues from other parts of the country and extrapolate them to be high-frequency problems here in Washington state. They try to take those issues and bring them home. All the reformers were talking about George Floyd, but that didn’t happen here; that happened two time zones away.
There are departments around the state that I would say have not made the best hiring decisions. If we in the Sheriff’s Office have any doubt as to an officer’s character, integrity or ability to do the job, we end up not hiring them or releasing them after their probationary period. We’ve not had a lot of issues with use of excessive force here in Whatcom County.
There are other issues. We see people let go from one agency and hired by another, after misconduct, and that leaves you scratching your head as to how that happens. I have no problem decertifying officers who engage in serious misconduct or have demonstrated lack of ability to do the job.

Q: How else does reform legislation affect officers and agencies?
A: The laws have increased the civil and criminal liability for law enforcement officers, and it makes them less proactive, I think. They don’t always feel like they have the support they need, or the resources.
We have three deputies who have left to work in law enforcement in other states. People are looking because they want to do the job, but they don’t feel they can do it here — and that’s at agencies across the state. People are seeing more exposure to unfair criticism and some of the vile rhetoric against law enforcement. We’re finding less and less qualified people seeking positions in law enforcement; departments around the state are not fully staffed, including in Bellingham.
It takes a long time for us to hire someone. We are mandated by the state to send people to the academy for almost five months, and then they have a 12-week training program here. If we have somebody leave, it takes time to onboard someone new unless they already have the training and they have the experience — and we’re competing with places like Everett that have $30,000 signing bonuses for experienced officers.

Q: Any words of wisdom for business owners and operators?
A: They need to have a serious plan to deal with criminal activity. Each has needs, depending on their business and the geographic location they’re in, whether they’re in a remote area in the county or they’re in downtown Bellingham.
Additionally, I encourage businesses that are victims of crimes to make prompt reports to law enforcement. Even though it may seem fruitless because the people are out the next day or not apprehended, it’s important that the public and elected officials know the true extent of the problem we’re experiencing.

Q: Finally, how are deputies Thompson and Rathbun faring after having both been shot while responding to a call in Peaceful Valley in February?
A: We’re praying they can come back to work. They’re both excellent deputies. We’re proud of their performance. We’re proud of the citizens who helped them survive that day, providing them cover so they could get to a safer location. These deputies, despite both being shot in the face, chose not to self-evacuate. They stayed on the scene until they were relieved because they didn’t want to leave the citizens out there. We’re just very thankful they survived, and we’re optimistic that they’ll be able to get back to work. All kinds of support was clearly demonstrated from the entire community, and we’re heartened by everyone’s concern.

And The Winners Are…