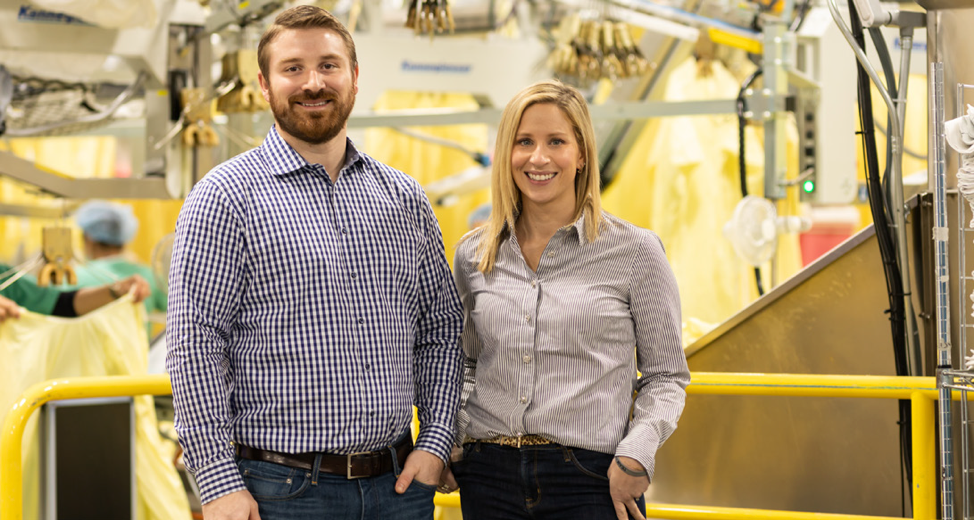 When you’re in the hospital, you’re not thinking, “Where did this blanket come from?” “You’re thinking, ‘This warm blanket makes me feel a little better,’” said Kelsey Van Miert, president of customer relations and family owner at Northwest Health Care Linen.

The Bellingham-based company, founded by Van Miert’s father in 1992, might not be glamorous, but it is essential. It’s a medical-only laundry service for clinics, surgery centers and hospitals, including businesses ranging from sole practitioners to national organizations. NWHCL serves 17 hospitals and 450 clinics, from the U.S.-Canada border to Olympia and from Enumclaw to the Kitsap Peninsula.

“We’re a rental laundry, which means we purchase products for our customers and rent it out to them on a daily basis,” Van Miert said. The company provides blankets, spreads, sheets, pillowcases, towels, underpads, baby and pediatric products, lab coats, patient gowns, scrubs, isolation gowns and much more.

“When we tell people we own a medical laundry, they think of a laundromat, with rows and rows of washers and dryers. But this could not be further from the truth,” Van Miert said. “We have robotic folders that fold 1,200 pieces an hour. We have tunnel washers that are 50 feet long and wash 15 different product types at once. We RFID-chip all our scrub-wear and ‘check it out’ to our customers.”

RFID, or radio-frequency identification, allows products to be tagged and identified via scanning technology. Van Miert said that the company also has isolation gowns (worn by health care providers) with RFID chips so the number of washings can be monitored to ensure the gowns are protecting their users.

In all, the company processes 50,000 to 60,000 pounds of laundry per day. Until recently, NWHCL was owned by Van Miert’s father, mother, brother and herself. When her father, Jim Hall, died in March 2020, his ownership transferred to his wife, Jill Hall, who is now the majority owner. (Van Miert and her brother, Evan Hall, the president of operations, are also owners and run the business together.)

All laundry is processed in the main location in Bellingham, which has 110 employees. A depot/transfer station in Puyallup, with five employees, serves South Puget Sound.

Shortly after founder Jim Hall graduated from high school in 1972 and started college, his mother was in a car accident. His father (Kelsey and Evan’s grandfather) at that time owned St. Francis Extended Health Care in Bellingham. His father had to care for his wife full time, so the management of St. Francis, then on Williams Street in the Eldridge neighborhood, fell to Jim.“My dad unexpectedly found his calling in taking care of the elderly and more vulnerable population,” Van Miert said.

Jim Hall created an on-site laundry at St. Francis. When medical facilities requested that he expand the service, Jim and Jill recognized a need. They attended an industry trade show and spoke with a consultant.“My dad thought, ‘Well that doesn’t sound very hard to get started,’” Van Miert said.

He drafted a business plan and signed five local hospitals to 10-year contracts before he had acquired either land or building. The Halls built their new business, Northwest Health Care Linen, on Strider Loop Road in Bellingham’s Irongate area and opened in February 1992. They sold St. Francis to Avamere, a national conglomerate, in 1993.

In 2002, having won several large clinic contracts, NWHCL remodeled and expanded, tripling the existing facility to 42,000 square feet, gaining efficiency and improving resource conservation. “We needed more room for new equipment,” Van Miert said. “We brought in our first tunnel washer, which was a big deal.”

In 2012, they installed a Kannegiesser garment system, one of just three in the country at the time. It had five hanging stations with RFID-equipped hangers, a steam tunnel and two robotic folders. In 2019, they expanded again to 50,000 square feet total, purchasing a Kannegiesser wash system — complete with tunnel washer, press and six dryers — resulting in energy and water savings.

With the minimum wage having increased 44% over the past four years, the cost of producing a pound of clean linen is rising, Van Miert said. To avoid price increases, NWHCL has been looking to reduce operating and utility costs. Hence, the new equipment.

In 2020, the company added a sixth hanging station and another robotic folder, further reducing the time it takes to process 25,000 to 30,000 individual garments daily. “When a medical facility orders linen, you work until it’s done,” Van Miert said. “You can’t say, ‘Sorry, we didn’t get it done.’”

The new folder and hanging station cuts three to four hours off the day — lightening the load on that department from 20 hours a day — enabling the company to do the same amount of work in less time.

“Growing up, our parents always told us they wanted us to go out and do our own thing, that they weren’t just going to give us jobs at the laundry,” Van Miert said. “If we really wanted to be part of the family business, we had to prove we could bring something to the table. My brother and I worked there summers during high school then went off to college and pursued different careers.”

When Van Miert’s first daughter was born, she and her husband decided to move from Kirkland back to Bellingham to be closer to family; she brought marketing and customer-service skills when she joined NWHCL in 2013. Brother Evan came on in 2016, moving with his wife back to Bellingham from Maui.

Annual sales are currently $13 million. The company has four semi-trailers that deliver to hospitals and one large semi — “a two-story semi-trailer with an internal elevator that allows us to put 53 carts in one load; it’s quite a marvel,” Van Miert said — that transports linen to the depot in Puyallup.

“The stakes are much higher when working on renewals these days,” she said.

The effect of COVID-19

The greatest challenge during the COVID-19 pandemic was early on, when elective surgeries were shut down. Within a week, NWHCL lost 50% of its business. “Our employees were done with all their work in three hours instead of their usual eight or nine,” Van Miert said.

“We were approved for a PPP loan, which was extremely helpful. We paid everyone full wages regardless of number of hours worked. We didn’t have to lay anyone off. Once elective surgeries opened up, everyone was back to work full time.”

Many hospitals had been using disposable gowns only, and when that supply grew limited, there was a run to reusable. NWHCL was positioned to fill that need, since it had always offered reusable gowns.

“We have seen exponential growth in demand for these products,” Van Miert said. “Providers who had bought and worn their own scrubs were now asking for our scrubs.” Why? “Germs! They don’t want to take their own scrubs — that possibly have COVID-19 on them — home with them.”

“We are proud to carry on the legacy and work of our father,” Van Miert said. “But right now, I am most proud of the resiliency and dedication of the 115 people who work at Northwest Health Care Linen. As an essential service that serves health care providers on the front lines, our employees put their health and well-being on the front lines as well. They are our hidden heroes during this crisis.

“Everyone came to work, and continues to come to work, to provide care for those most in need.”