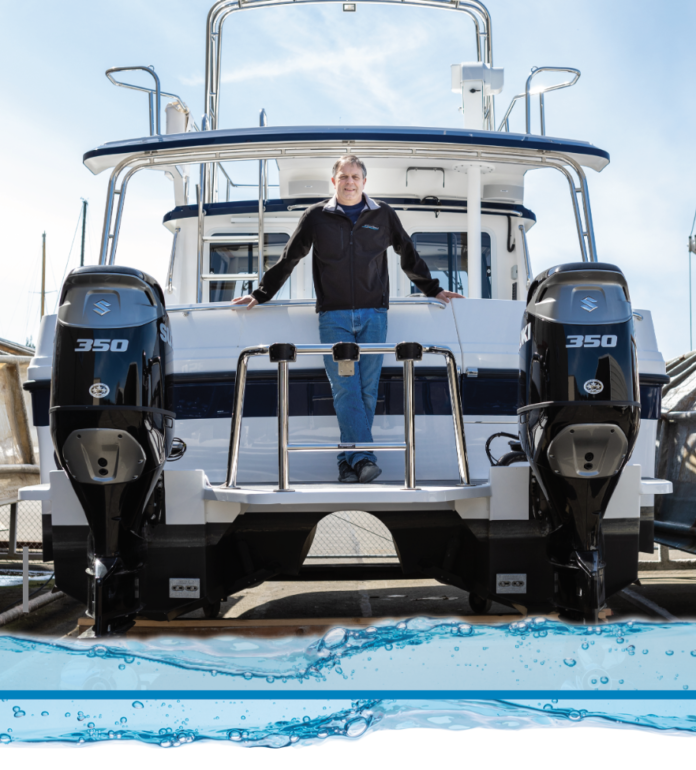 Hidden away in a warehouse on Fairhaven’s working waterfront is the longest continually operating fiberglass boat manufacturing company in the country.

Swing open the door to Northwest Marine Industries’ 32,000-square-foot warehouse and step into a place where boats are born — or, if not born exactly, created step-by-step out of stuff like gel coat and sheets of fiberglass roving, a stiff, fabric-like material.

It’s nothing like a car assembly line. What this company of 40 employees does is more like hand building with power equipment.

The entire process — to see a finished, fitted-out, 28-foot Sea Sport Commander arise from the shop floor over 10 weeks — seems nothing short of miraculous.
NMI makes and sells 50 boats a year, ranging from 22 to 32 feet long. All are “pilothouse” boats, meaning they have a fully sealed and waterproof cabin containing the main steering position.

NMI’s annual revenue is $5 million. The company builds five lines: Sea Sport, C-Dory, Osprey, TomCat and Skagit Orca. The Sea Sport, with six different versions, is responsible for 40% of revenue, with the C-Dory accounting for 30% and the Osprey 20%.

Every boat is customizable, said Greg Little, vice president of operations and one of the four local owners.

“Every boat we build has its own story,” he said. “Fulfilling customers’ dreams is very rewarding. You want a purple boat? You can get a purple boat!”

He sounds as if he’s joking, but he’s not. Customers can choose a boat’s exterior colors — having them match their company colors, for instance. The interior cabin can be reconfigured and done in custom colors, too.

Boats are booming
With the pandemic pumping up boat orders, NMI’s backlog is now 14 to 16 months long. The company would like to increase production but is struggling to find more skilled employees, Little said. He’s echoing a theme heard throughout industry, that skilled labor is in short supply.

“We have a good core group of employees that have been here a long time, but to ramp up is difficult,” he said. “I talk to dealers… there’s a need for more mechanics, more riggers, just more people.” A rigger installs equipment and accessories, including electronics, on a boat.

The company’s current warehouse could accommodate 15 more employees, Little said. “We would like to put out at least 75 boats per year. But there’s no union hall where you go to get boatbuilders.”

The pandemic has eviscerated air travel, driving people toward RVs and boats. The National Marine Manufacturers Association reports that powerboat sales increased 12% from 2019 to 2020, with sales levels not seen since before the Great Recession. Nationally, another increase is expected for 2021.

“People need to get out of the house,” Little said. “It’s worked out well for the boating industry because there’s an awful lot of water out there.”

Boats on the dance floor
Though its name and location have changed several times over the decades, NMI itself was born in the Pacific Northwest, in a former dance hall on the second story of the Schering Building at 10th Street and Harris Avenue in Fairhaven. A Bellingham man named Frank Wright launched his Wright Manufacturing Co. boatbuilding operation there in 1955, having heard about a wonderful new material called fiberglass. Up on the second floor, he and sons David, Bud, Dennis and Ronald began making open-bow Sportsman fiberglass boats, 8 to 12 feet long, for fishermen. To get the nearly completed boats down from the second-story dance floor, one of the windows was enlarged and an iron beam with a pulley installed above it. The beam-and-pulley system was used to lower boats to the 10th Street sidewalk below. Then they were carried around the corner to 913 Harris Ave. and through the double front doors for finishing on the first floor.

The pulley also was used to lift building materials up to the second floor, similar to how a hoist lifts bales of hay into a barn’s upper hayloft for storage.

Wright Manufacturing built thousands of car-top boats, contracting with Sears, Roebuck & Co. (the Amazon of its day) to sell them under the Elgin name. The car-top moniker meant these small boats could be lashed atop a customer’s car for transport.

“We contracted to build as many as we could for Sears, and that worked well for about three years,” brothers David and Ronald Wright reminisced in a 2008 interview with local historian and author Todd Warger, who wrote a story on NMI in the Dec. 2020 issue of the Journal of the Whatcom County Historical Society. In the late 1950s, since Wright Manufacturing was getting yearly contracts, the company built up inventory to 50 boats so the spring rush wouldn’t find them short.

“That’s when we found out Sears wasn’t going to buy any more boats,” the brothers are quoted.

Unbeknownst to the Wrights, Sears had gotten a Seattle supplier to copy the boats.
Their father, Frank, went to Ira Yeager, founder of Yeager’s Sporting Goods, who bought every boat, and Wright Manufacturing began its pivot to dealerships, which NMI continues to this day. (Today, NMI has 18 dealers — eight on the West Coast and 10 in Florida and elsewhere.)

Growth was slow in the beginning. People weren’t familiar with fiberglass; in Warger’s story, David and Ronald remember their father rapping the side of a boat with a rubber hammer to show how tough it was.Since its founding 66 years ago, NMI has sited operations at various times on Harris Avenue, McKenzie Avenue, Guide Meridian and, in Ferndale, LaBounty Road. Ownership changed over the years, too. Ronald Wright, with son Mark Wright and son-in-law Ryan Binning, regained control of the company in 2012. Ronald retired in 2020, and today NMI has four owners: Ryan Binning, Mark Wright, Greg Little and Michael Millison, who also is the production manager.

Little, born in Bellingham, had worked as a rigger on boats for years before joining the company in early 2014, when it was in Ferndale. He remembers the catastrophic fire at the Ferndale facility on Sept. 11, 2014.

“The whole building was a total loss,” he said. “We lost C-dory molds and our 28-foot Sea Sport Commander mold. There were two boats inside that were almost finished.”
Some boat molds that had been outside were salvaged.

After the fire at Ferndale, the company re-formed as Northwest Marine Industries and relocated to its present warehouse at 809 Harris Ave. in Fairhaven — within shouting distance of its upstairs dance hall birthplace at 10th Street and Harris Avenue. After the fire, NMI got a lot of support from the boating community, Little said.

“To come back was hard, because you’re starting from scratch. We decided to go for it, and I’m glad we did.

“It was a lot of work. Everybody stuck with us.”

A beautiful ride
Back on the production floor in the Fairhaven warehouse, Little is talking about Sea Sport rendezvous, those (pre-COVID-19) events at marinas in the San Juan and Gulf Islands where customers gather for fun and fellowship.

“You get back together with the people you built the boat for,” Little says. “It’s great to get feedback, hear how they’re enjoying it, and it helps us build boats for the future.” As he speaks, he surveys a nearly finished, 28-foot Commander Sea Sport boat with a 9-foot, 9-inch beam and two 350-horsepower outboard motors. The boat normally retails for about $280,000, but this one, with deluxe custom upgrades and extra horsepower, is about $330,000. Little runs his hand along the satin-smooth, gleaming finish.

Just like this company, which is afloat and thriving despite rough water over its 66 years of continual operation.