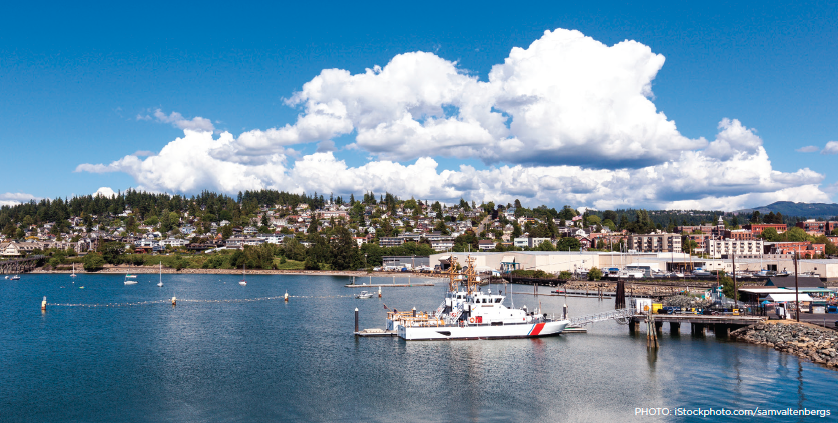 Our job at the Port of Bellingham is right there in our mission statement: promote sustainable economic development, optimize transportation gateways and manage publicly owned land and facilities to benefit Whatcom County. With that in mind, here are just a few success stories to illustrate how active we have been the past year. The most noticeable project was the selection of a development group to move forward with the redevelopment of the old Boardmill building. The group (called the Boardmill Group LLC) includes Michael Watters, Elie Samuel, Faber Boardmill investments, and Sean Hegstad, owner of Haven Design Workshop. The Boardmill group and its proposal was chosen because it preserved the legacy of the Boardmill building and incorporated a boutique hotel, a few residential units and convention space. The Port wanted local participation in this site, and this entire team is from Whatcom County. We sought a variety of stakeholders, including the city, the Chamber of Commerce and Bellingham Whatcom County Tourism, to weigh in on the various proposals. This development will be a game changer for the waterfront district, and we expect construction to begin in early 2023.

The Port put a substantial amount of time and effort into bringing back our shipping terminal. The terminal had fallen into disrepair and was useless as an asset for years. We invested in repairs and cleanup of the waterways and then added infrastructure to attract commerce. Today, ABC Recycling is shipping steel, and JE McAmis is exporting rocks to a salmon restoration project on the Columbia River. ABC has already shipped 7,250 metric tons of steel, and JE McAmis has shipped over 25,000 metric tons of rock. The two companies have accomplished something we have not seen in decades at the terminal. They have employed 100% of the membership of our local union affiliate. The union is actively searching for more bodies because there is more work headed its way. ABC expects to ship 180,000 metric tons through 2024, and 40,000 metric tons of rock will ship this year. That’s a total of 25 to 30 union-scale jobs and 20 jobs created at the companies during peak periods. In addition to jobs, the Port is finally getting market rate leases on the shipping terminal properties.

The Port is also becoming known as the epicenter for alternative energy employment. The success of All American Marine has brought us other opportunities. The latest is Corvus Energy, a Norway-based supplier of battery systems worldwide. Corvus will be moving into a manufacturing warehouse in Fairhaven. Corvus, the leading supplier of battery energy storage systems for marine applications, will employ 20 people at this facility. The Port assisted in securing the funding to retrofit the space for this use.

Geir Bjørkeli, CEO of Corvus Energy, said this about locating at the Port of Bellingham: “Knowing that we had strong, long-term partners that would support our growth plans made the final decision to expand (in Bellingham) easy.”

This took collaboration with Maritime Blue and the Washington State Department of Commerce.

We also approved a lease for Advanced Performance Parts, a design, manufacturing and distributor of world-class brake components and systems for race cars, high performance cars and armored vehicles. These parts are designed for such companies as Porsche, Ferrari, Lamborghini and other high-end sports car manufacturers. The company, which specializes in carbon fiber parts, signed a lease to occupy the Army National Guard building on the airport property. We initially approved a five-year lease. Advanced Performance Parts has now expanded twice within a year to accommodate growth at this location.

Finally, I want to highlight the incredible success of the container village in Waypoint Park. We call this area “The Portal.” This is an area that would have been waiting at least a decade to be developed by the City of Bellingham into a park. The Port took the initiative to initiate a business park using sea containers as structures. These containers are moveable, so when the area does become prime for growth, they can be moved to another location. The containers are in close proximity to the bicycle pump track that has become a mecca for local bike track enthusiasts.

We have a long list of vendors waiting to be approved for this village. They would join our tremendously successful operators: Kulshan’s Trackside beer garden, The Selkie Scoop ice cream shop, Sun-E-Land Bikes (a bike rental and repair shop), and the Rain or Shine Riviera Club restaurant (owned and operated by the same people who brought us the Filling Station and the Our Kitchen bakery and coffee shop).

Recently, the bike track hosted a national competition called Tune Up, which brought more than 7,000 people to the site. The vendors on this site have received a massive following, and business is booming under The Portal.

This shows that the Port is not only active but incredibly creative in our endeavors. The Port Commission takes pride in bringing people to the waterfront and bringing real work and working wages to Whatcom County. ■

District 2 Port Commissioner Ken Bell has been a Bellingham business owner for over 20 years. He is president of Best Recycling, a waste management company known for its ability to work in very remote locations like the Yukon Territory, Alaska, Antarctica, Greenland and the Aleutian Islands. Commissioner Bell is also CEO of the Iron Creek Group, a company with patented revolutionary thermal remediation technologies used for cleaning up contaminated soils. He has worked with major ports throughout the world and has experience working on contaminated property redevelopment projects like those that exist at the Port of Bellingham.