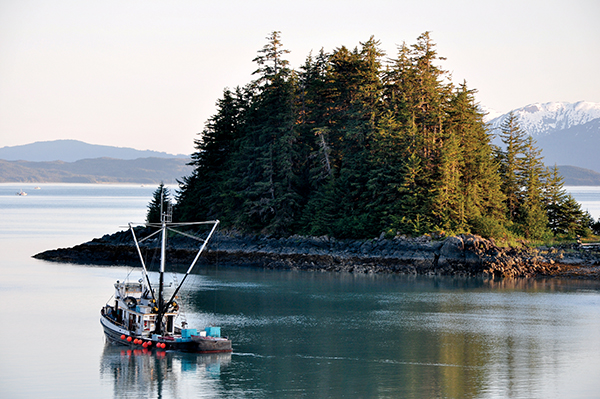 Did you know that Whatcom County has a thriving commercial-fishing industry? Many people don’t. The Port of Bellingham estimates that commercial fishing and processing companies in Whatcom County employ more than 2,700 on Port premises. The maritime industry in general employs more than 6,000 Whatcom County residents.

And did you know that many of the county-resident fishermen spend a good portion of their fishing efforts in Alaskan waters?  They also bring 10s of millions of dollars in income back to the county with them.

Many of the bigger boats in Squalicum and Blaine harbors travel to Southeast Alaska each spring to fish for pink and other salmon species. These are the 58-foot-long purse seiners. Alaskan law prohibits salmon seiners from being any longer than 58 feet. And Bristol Bay gillnetters can be no longer than 32 feet.

Smaller vessels, such as gillnetters and trollers, go to Southeast Alaska as well. Some boats travel as far as the southwest tip of the Alaska Peninsula. Other Alaska locales include Kodiak, Cordova and Prince William Sound, and Cook Inlet.

Bellingham and Blaine also have a fleet of tenders that travels to all these areas each season. These are larger vessels that take the fresh catch from the fishermen and deliver it to the seafood plants for processing.

Whatcom County also is home to many boat owners, skippers, and crewmembers who fish in the fabled Bristol Bay sockeye fishery. Their 32-foot gillnet boats stay the winter in boat yards around the Bay. Crews fly up in early June for two months of intensive fishing; the 2018 sockeye run is predicted to be a near-record 50 million fish!

Anecdote: Resident Alaskans view fishermen from the “Lower 48” with some disdain. But they have come to accept their out-of-state cousins in the sometimes intense competition for fish!

Anecdote: Did you know that in Alaska, many fishermen refer to sockeye as “reds,” and chum salmon as “dogs,” and pink salmon as “humpies” and coho salmon as “silvers,” and chinook salmon as “kings”?

On any given day in the Summer in Whatcom County, you’ll see seafood products that were caught in Alaska, and chances are it was caught by local fishermen. For example, fresh Copper River sockeye are first in the marketplace in mid-May. By late June, they’ve been supplanted by sockeye from Kodiak and Southeast Alaska. July features fresh Bristol Bay sockeye. Trolled silvers will appear shortly after sockeye as well as Southeast Alaska pinks and chums in August. Winter months will feature these species that were flash-frozen. From mid-November to mid-March, fresh halibut from Southeast Alaska is available.

There are a number of salmon fishermen living in the county who sell their catch directly to local consumers. Entrepreneurs, such as Desire Fish, Fall Line Fisheries, Sea to Shore Seafood, and Nerka Sea-Frozen Salmon offer high-quality frozen salmon in the Fall, Winter and Spring.

Alaskan waters draw the fisheries and fill the boats, but the hauls return to fill the Whatcom County tills.

Pete Granger retired from 45 years of working in the maritime and commercial fishing industry (and remains an active reef-net -fishing operator off of Lummi Island). Pete also serves as president of the Whatcom County Working Waterfront Coalition.

FISHING IN ALASKA BRINGS 10s OF MILLIONS IN REVENUES TO WHATCOM

The migration of Whatcom County-based fishing vessels by the hundreds to Alaska account for an enormous economic boost back home at the Ports of Bellingham and Blaine.

They create hundreds of jobs and then bring back 10s of millions of dollars in gross product that translates to hefty incomes for families and crews of the wide variety of fisheries.

Fishing boats of all sizes (within limitations of Alaska law), worked by men and women, and often employing high school and college youths for rigorous summer work, travel far and wide around the state of Alaska’s waters.

Some boats travel as far as the southwest tip of the Alaska Peninsula. Other Alaska locales include:

The Arctic and Yukon Region in the northwest;

Down around through Bristol Bay, Kodiak, and Cordova (seat of the famous Copper River) in the Westward Region;

And, the Southeastern Region moving toward the coast west of Juneau.

These waters have a reputation as the some of the most pristine and best-managed fishing areas in the world. This map shows the breadth of the managed areas for commercially fished salmon: