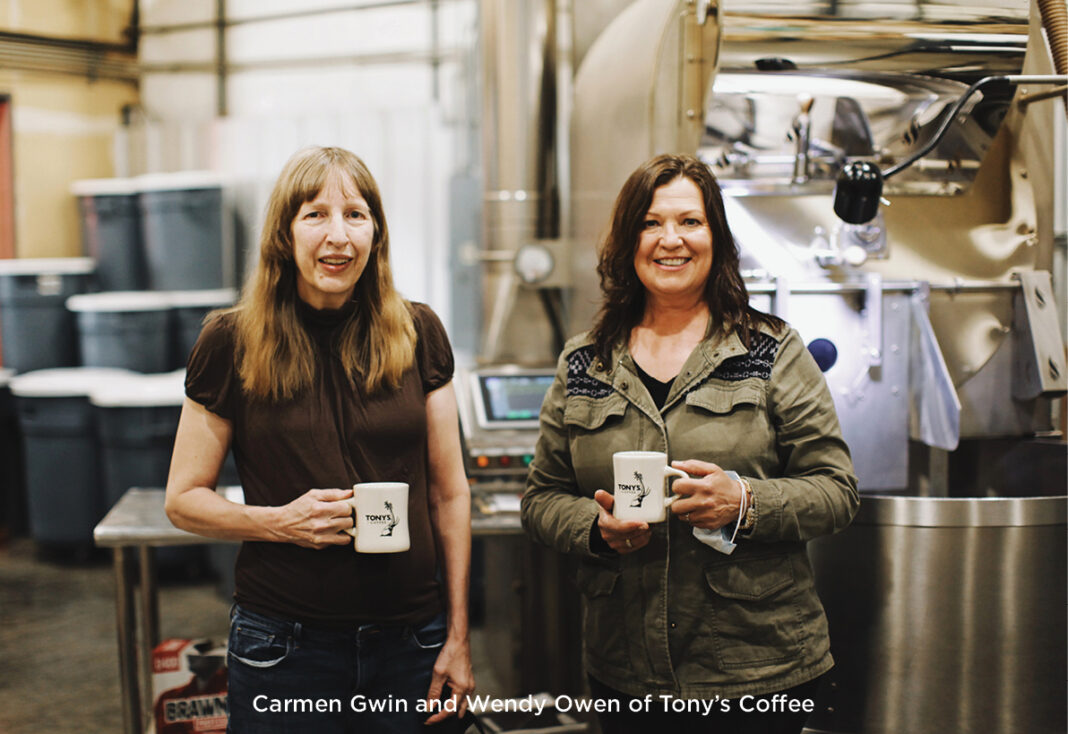 S(l)ip into the world of coffee bean roasting in Whatcom County. Tony’s mirrors it. Mirror mirrors it. And it’s Maniacal.

Specifically, this is the world of specialty coffee beans. These are Arabica beans, sometimes referred to as gourmet, which make up about 60% of the world supply. Robusta beans, on the other hand, are higher in caffeine and bitterness while considerably lower in price.

Within this high-profile world, sprinkled with the jargon of beans and java, are a handful of quality Bellingham roasters, including Tony’s Coffee, Mirror Coffee Roasters and Maniac Coffee Roasting. That these roasters are in Bellingham is not insignificant, as the city has received media recognition (from such sources as Infogroup Research and National Geographic Travel) as being among the top 10 cities in the United States for specialty coffee.

These companies reflect continuous growth. Business Pulse reported on this business segment almost 10 years ago, and the decade since has seen nothing but progress.
Let’s double the roll call to punctuate the point, bringing in Woods Coffee in Lynden, a well-established roaster, and a couple of newcomers: Barnyard Coffee Roasters, in Blaine, and Camber, a roaster and café in downtown Bellingham.

This sextet of roasters represents the stealthy mainstay brands (Tony’s was established in 1971, and Woods dates to 2002); the small (Maniac, along with the likes of Hammerhead, Lotus and AgriBay); and the new (Barnyard and Camber, along with the really new — as in, opening right in the face of the pandemic — Mirror and Coast Salish). Another popular, local wholesale specialist is Bellingham Coffee Roasters.

Herein you have your stalwart mainstays and your fresh faces, reaping all kinds of awards and recognition for excellence. They further represent the variety of shapeshifts and sizes of business models — wholesale, totally in-house, online, drive-thru and café shops.
Above all, they stand as a testament to the love of expensive, exceptional coffee, hard times be hanged.

Among the oldest and best
In 2021, Tony’s is celebrating its 50th year of roasting. It was one of the first roasters and specialty coffee shops in the U.S., starting up the same year as Starbucks and Seattle’s Best, shortly after Peet’s introduced the traditional European concept in Berkeley, California. Tony’s started wholesale deliveries 10 years in, eventually selling the café that still operates independently in Fairhaven. Tony’s has operations in Bellingham and clientele covering the entire region (including the San Juan islands), servicing retail, companies, casinos, and more, coupled with direct-to-consumer via its website.

The management team reports that the company has roughly doubled in the last decade — in employees (50) and in volume (more than 2 million pounds a year). The banner headline for them these days: Roast Magazine, an industry icon, named them Macro Roaster of the Year for 2021.

“That’s very exciting for us; we’ve worked hard toward that goal,” said Wendy Owens, who, as director of distribution, manages sales, training, shipping and equipment maintenance.
In a press release about the award, CEO Todd Elliott shared a similar sentiment: “Our commitment to sourcing high-quality, sustainable coffee has always guided our path, and we are honored to receive this recognition.”

Tony’s became a founding member of World Coffee Research in 2012, took first in Best Espresso in America at CoffeeFest in 2013, won the Specialty Coffee Association of America Roaster’s Choice competition in 2014, and reached $1 million in social premiums paid to Fair Trade coffee cooperatives in 2018.

Woods is coming up fast on its 20th anniversary. Ten years ago, Woods had 10 stores. It now operates 19 shops and/or drive-thrus in Whatcom, Skagit and King counties (though a few have closed temporarily for COVID-19 safety). Woods roasts between 1,000 and 1,500 pounds a day and is the only 100% self-contained operation hereabouts.

“We’ve become vertically integrated with our infrastructure,” CEO and founder Wes Herman said. “We now pick up from the dairy and distribute to all our stores, along with our coffee and daily fresh-baked goods and dry goods and everything else that we do. No one delivers any product to our stores except us.”

Micro standouts
While Tony’s and Woods are the giants of roasted coffee in Whatcom County, Maniac has been around for 15 years as a fixture on the popular micro-roasting scene. It was founded by Alexarc Mastema after he launched the renowned Black Drop Coffeehouse in downtown Bellingham. He still roasts for Black Drop, though he sold the coffeehouse to employees several years ago to concentrate on roasting alongside one employee. The pandemic jumpstarted deliveries to small accounts and individual customers — deliveries that Mastema makes personally, sometimes 75 a week and sometimes more than 400.

The small roasters thrive on exclusivity at local coffee shops and grocery outlets, with loyal patrons buying by the bag. Lotus roasts for longtime drive-thru Mug Shots in Ferndale and newcomer Locus Café in Bellingham. Hammerhead, now under the auspices of Barnyard, distributes to numerous cafés and grocers, especially the Community Food Co-op. One drive-thru — The Bean Stop in Bellingham — even roasts its own coffee inside its small site.

Research is hard to come by on facts and figures about the bottom line or employment power of the local specialty coffee industry. (We reviewed about 30 sources and determined that Washington rocks with the best — New York, California and Alaska.) All signs point to the industry as a robust segment of the Whatcom County economy. The signage hangs on well over 100 specialty coffee sites.

Every town in Whatcom County, and much of the countryside between them, has an espresso presence, with names ranging from A to Z (Adagio/Avellino/Allegro to Zoom Zoom). One source said the U.S. has more than 25,000 specialty coffee shops. If you drive enough loops and town-to-town in Whatcom, it can feel like half of them are here. They’re in virtually every food marketplace. They’re in bookstores in Lynden. Every route into and out of the county is lined with espresso stops.

The county’s first drive-thru opened in Bellingham in 1990 and still operates these 31 years later at the corner of Holly and Forest as I Wana Moka. The founder, Parker Graham, opened a second one — originally called Caffé GoGo — in Lynden. It sat on the site that now is the headquarters store for Woods Coffee. Those two started the boom. Woods (19 stores) and Cruisin’ Coffee (1-8 in Whatcom County, with a 9th on the way in Ferndale) now lead that parade of locals.

“At one point we led the area in stores,” Herman said. “Then Starbucks doubled down and opened several more. Now, with our fresh, from-scratch bakery instead of frozen-thawed-sliced we have taken the lead in food selections.”

Coffee lovers relish one of America’s favorite drinks (even more than water, according to some online sources). At $1 and more an ounce, they brew in multiple ways at home, including with one-cup capsules, pour-over contraptions, moka pots, French presses, coffee percolators and drip coffee makers. Or, for $3.50 (and usually more) per cup, they drink while relaxing in a café setting or hurrying past a drive-up window.

The number of ways to roast, serve and sip all-the-rage Arabica coffee is endless, from black to sugar-loaded to whipped-cream topped. Dark roast, medium, light. Hot or cold. Baristas bustle with a constant stream of car after car, walkup patron after walkup patron.
All this places Whatcom County squarely in an elite status, nationally.

Coming to mind is a fitting line from 19th century English poet Elizabeth Barrett Browning. Coffeehouses — a tamer version of pubs at the time — numbered in the 500s across England in the mid-1650s, continuing in Browning’s day in the 1800s and still thriving there today. Browning’s famous line (which we can pretend is about coffee):
“How do I love thee? Let me count the ways.”