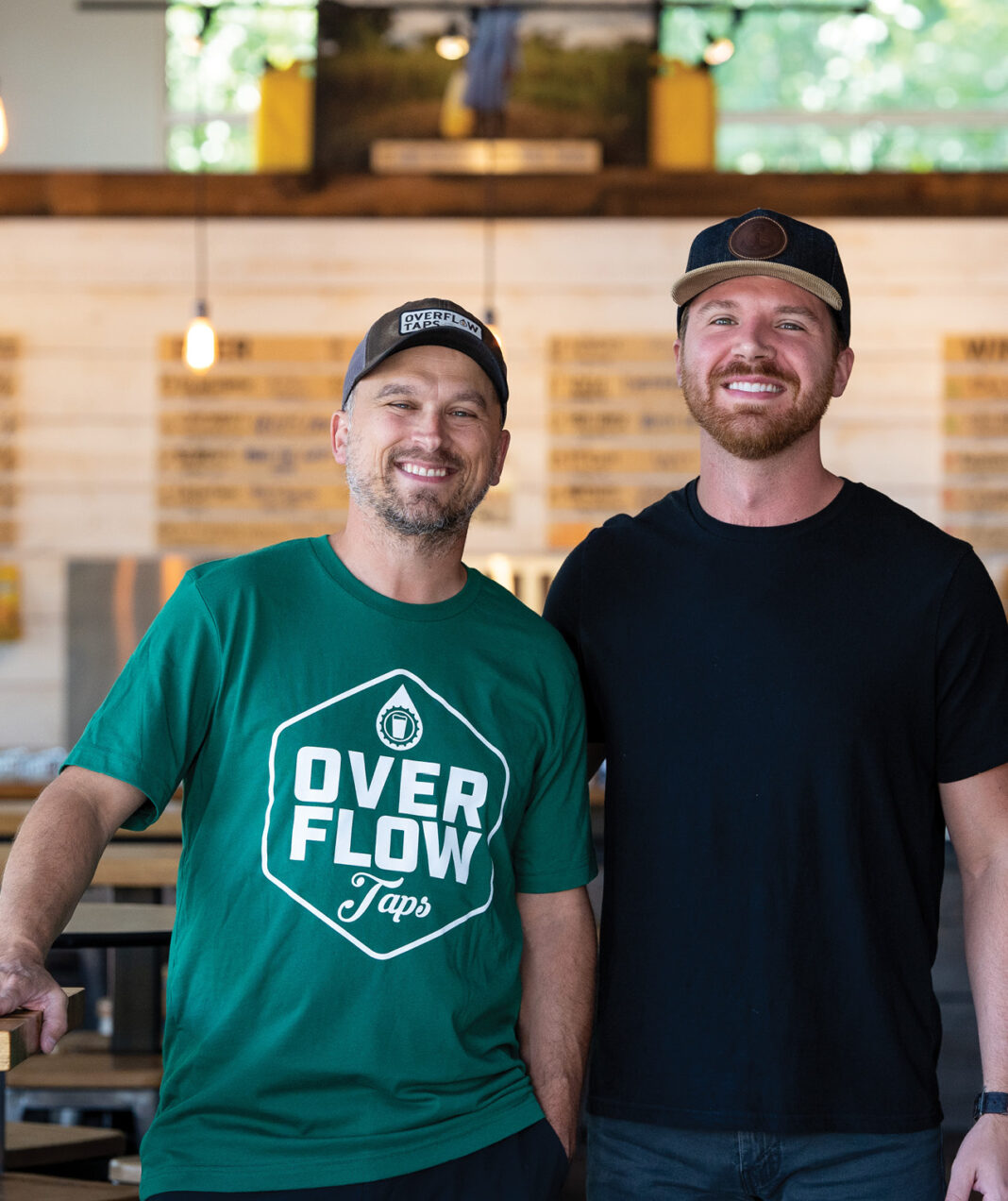 It’s a common scene: A group of friends is hanging out chatting about a great business idea they should partner on. They know it would be a success, and on top of that, they could do some social good. Everyone knows it’s a can’t-miss idea; all they need to do is get started.

That, unfortunately, is where most ideas end — people go off to their daily lives, never moving the idea forward.

This story easily could have been the case for Jesse Nelson, co-owner of Overflow Taps, had he not crossed paths with Adam Stacey. While discussing a potential beer blog that Nelson was considering starting, Stacey noticed the passions he shared with Nelson and approached him about starting a taphouse. With the shared desire to have great beer accessible to people in Whatcom County and to do some social good in the process, they acted on the idea, and as a result, they have achieved both goals.

Overflow Taps’ first location opened in downtown Lynden’s Waples Mercantile Building in 2016. Nelson and Stacey did not want to lose sight of the social good component of the business, so they built it into the model from day one. Overflow Taps has partnered with Charity Water, which funds clean water projects across the globe. Charity Water was chosen specifically because of how the organization is run.

“One hundred percent of the public’s donated money goes to water projects, then all the overhead is funded by a group of families,” Nelson said. “So, if I give one dollar, one dollar is going straight to the projects.”

Originally, the plan was to change monthly or quarterly where the business gave money, but as time went on, the owners felt that consistency would be more impactful.
“Overflow Taps is all in on making the world a better place with our clean water project,” Nelson said. “We donate 1% of all revenue to our charity and nonprofit partners to help bring clean water to people in developing countries.”

The 1% donation of funds is just a part of what Overflow Taps is doing. Nelson and Stacey are extremely proud of the approximately 20 projects they have fully funded or been a part of, but the consistency of sticking with the one mission has led to an awareness that goes farther than their money can.

This social good component, which began as just a piece of what the business was about, now has moments when it’s the star.

Two years after opening the Lynden location, Nelson and Stacey were encouraged to open a second location in Barkley Village. They didn’t feel completely ready, but in the end it worked out; the move not only grew the business but also led to the start of the Clean Water Happy Hour on Saturdays. In partnership with the Cohen Group Northwest, the monthly event is designed to bring awareness to people’s lack of access to clean water. At the event, each customer’s first drink is paid for, and there are lots of giveaways. The hope is that greater attendance means more people connected to the cause.

For Nelson, it’s exciting to see the happy hour happening again and to have people back in the taphouses enjoying a beverage. During the height of the COVID-19 pandemic, that was the focus; it was hard to talk about the mission when there was no money to give and no people in the taphouses.

Like everyone in the industry, Nelson and Stacey had moments when they thought, “What do we do now?” They decided to use the time to make Overflow Taps better and find new ways to connect with their customers. At the Lynden location, they instituted Aloha Friday, where people could preorder pizza and beer and drive up and get it. Then customers could join Stacey and Nelson live online for beer tastings while enjoying their pizza. The owners also started beer and wine clubs, with customers getting bottles monthly or quarterly.

These clubs created some revenue, but more importantly they kept Overflow Taps at the front of people’s minds. After the pandemic is over, the clubs will continue.

Out of the beer and wine clubs came the idea for the Cellar Club, which allows Overflow Taps to bring in special beer that normally wouldn’t sell well.

“The Cellar Club, which is reserved for 12 people only, has big beers that we can usually only get a case of that we might have had a hard time selling because people weren’t necessarily aware of what those beer were or we struggled to communicate that to people,” Nelson said. “We knew we could start the Cellar Club and find 12 people who love those beers to make sure those cases are always sold when we bring them in.”

These clubs have brought Nelson and Stacey back to what started Overflow Taps in the first place: a love for beer. The crisis led to an innovative way to focus on the foundation of the business. While the owners were forced to keep the doors shuttered, they continued to innovate. They sold limited-release merchandise, purchased a growler machine for beer to go, and set up a new text platform for communicating with customers. Messages sent to 360-205-9322 go directly to Nelson and are a way for people to be a part of exclusive information and giveaways.

As they innovated to keep afloat, the team focused on the future in parallel. The downtime was used to rebuild the company’s website at www.overflowtaps.com, where customers can check out the podcast and see the current tap list for each location. The beers rotate continually, with Stacey diligently seeking out new beers, ciders and wines to bring in while rotating through old favorites. They also used the time to increase food options, now featuring pizza, chicken wings, soft pretzels and Cajun tots at both locations.

After finding ways to improve through COVID-19, Nelson is optimistic about the future — even though numbers are still below what they were seeing before the pandemic.

“If I can see month-after-month sustained revenue growth … and I’m having conversations with our team and our guests about the clean water cause, I will feel like the year has been a success,” Nelson said.

With that confidence, he and Stacey are looking to continue the growth of Overflow Taps. They are on the lookout for a good spot for a third location, which they plan to make friendly to all ages. They also have plans to add a few more locations in the coming years.

To try the current beer, wine and cider options at Overflow Taps, stop into one of the two locations. The Bellingham taphouse, located at 2930 Market St. #117, is open daily. The Lynden location, at 106 5th St., is open Monday through Saturday.