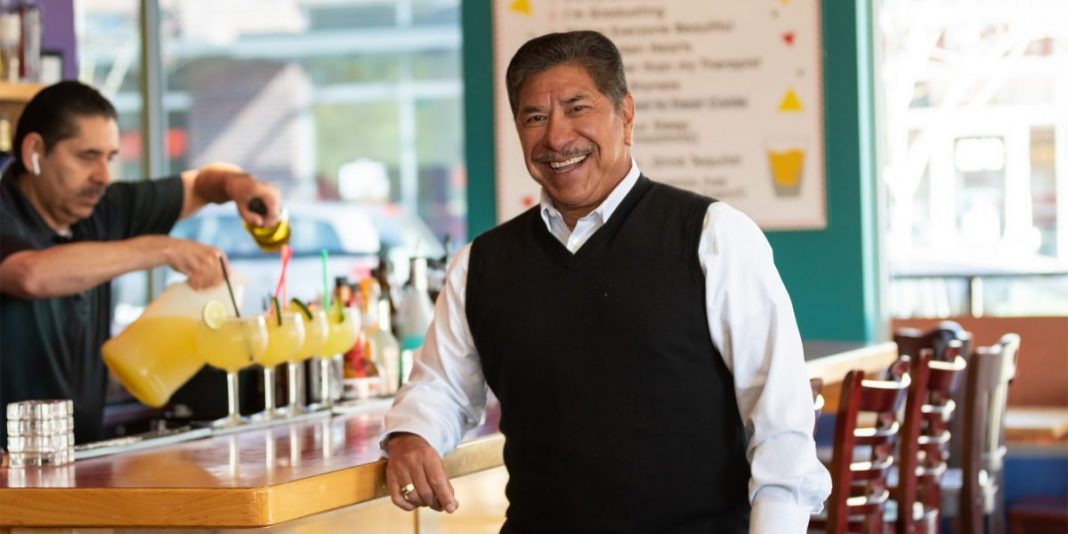 Jesse Cantu returned from a Florida vacation in the midst of the COVID-19 outbreak. Arriving on a Friday night with a few delays — including dropping off another couple struggling to find transportation home — Cantu immediately faced Gov. Jay Inslee’s order closing various businesses, including restaurants, as a protective measure. Ouch. Not only does Cantu own a restaurant, he owns four of them. That includes three Jalapeños restaurant locations — in downtown Bellingham, Barkley Village and Fairhaven — and Luna’s Bistro.

Did COVID-19 take him by surprise?

Fortunately, he and his son Daniel Cantu, his “right-hand man” at work, already had been working on being more competitive prior to the COVID-19 issue.

“The food industry is changing,” Jesse Cantu said. “Most grocery stores have a restaurant inside, and there’s a lot of competition with Mexican food.”

Even eateries of other types include Mexican dishes on their menus, he said, such as tacos. Being more competitive meant investing in bringing food to people.
“It’s full speed ahead on deliveries,” he said.

He ordered two vans in December 2019, and a third is to come soon. The vehicles will allow for delivery and full-service catering offerings. Cantu announced on Facebook March 21 that they were ready to start deliveries and bring food directly to patrons sequestered at home to help prevent the spread of COVID-19. Good food still can be made and enjoyed, Cantu said, but it could be hard on profit margins since 10 of his employees are salaried, not hourly. Each purchase represents the creation of work hours.

Another result of COVID-19 has been the strong awareness of the importance of his employees’ health.

“I sent a text that if anyone was sick to stay home,” Cantu said. “Everyone I know is healthy, but stay home if sick… whatever the reason.”

Cantu sent care packages — containing such perishables as milk, eggs and chicken that the restaurants had ordered — home with employees to help support their families.

When new employees are hired, Cantu likes to take part. He finds it important to be involved in the interviewing process, he said, so he can know who is working for him.
“Everyone is responsible,” he said. “I have very good managers, some of whom have been with me for over 10 years (including two brothers, Jose and Leo Doniz, and brother-in-law George), and great employees.”

Learning to shift and be nimble
Cantu, raised in Mexico, found himself at age 23 having to leave college due to a lack of funds.

His sister Elvia, then married and living in Houston, made him a proposition: She would help him find a job in the food industry. He had absolutely no experience in the food industry, but he made the move and was willing to start in the kitchen, doing dishes.

Before long, he observed what was happening around him. He noticed that others were making more money, while he was working from 10 p.m. to 6 a.m. six nights a week. Within three years, he was chef in the kitchen.

He made a few moves after that — back to Mexico, north to Minnesota, and then, around 1979, to Chicago. He eventually aligned with the exclusive Country Clubs of America at a private club in Atlanta. In contrast to his first job, this was a fine dining room located on the 49th floor. He was still learning English but went from being a bus boy to a supervisor for almost two years.

He continued to move onward and upward, from one first-class establishment to another. He moved back to Texas to another club, The Plaza Club. With a letter of introduction in hand, he became, in turn, captain of the bus boys, server, bartender and captain. After three or four years there, he shifted to the elegant Hotel Houstonian’s privately owned club and then to Houston’s first luxury hotel, then known as the Warwick Hotel (now Hotel ZaZa), managed by Wyndham Hotels. During his Texas years, he not only met President George H. W. Bush and President Bill Clinton, but the woman who would become his wife, Alicia Cantu.

Alicia had come into his office claiming to be a prospective client, Cantu said.
“I got a call from the front desk to book a party,” he said. “She was 20 at the time, introduced herself and said she actually wanted a job. She was honest and wanted to pay for school. “I gave her a job.”

Their friendship developed, and they eventually married. When Alicia was taking marine biology classes at Texas A&M University in College Station, he was working at The San Luis Resort, Spa and Conference Center in Galveston, on the other side of Houston.

“She’s been my rock, my support,” he said. “She knows when I’m stressed, panicking. Prosperity is one thing, but the first three years were hard.”
“She’s my best friend…my whole life.”

Soon, Wyndham was asking for his help in Washington at the Semiahmoo Resort in Blaine. The resort needed his expertise with banquets to organize and update the systems. Alicia was thrilled to move to the Northwest. After his five-year contract ended, Wyndham gave him a choice of where to move next.

The choice: Stay in Whatcom County
“My wife was in love with the Blaine School District,” he said. “She wanted to stay. So, what to do next?”

The result was his first Jalapeños restaurant, at 501 W. Holly Street in downtown Bellingham. The opening date was March 1999. After painting and cleaning, he experienced a first: “I was working for myself.”

As in many first starts, he was working a lot — one of just two or three employees.
“It was hard,” he said.

For the first five or six months, he didn’t have one day off. “By afternoon, I’d let the others go early,” Cantu said. “Then I’d be the one to seat them, take the order, make their drinks, cook their food and serve them.” As he said, it was hard.

“Sacrifice,” he said. “It’s hard work, time and sacrifice. I missed a lot of birthdays and events.”

He and Alicia mortgaged their home and had sleepless nights, but they continued. By the second year, things grew. In year three: “It took off.”

“My employees give attention to every person, no matter what they spend,” Cantu said.

In addition to this personal attention, the second key is “quality control in the kitchen.”

“We use recipes I’ve created,” he said. “We cook from fresh and use good recipes.”
From scratch? Yes. Chefs make their own chips, salsas and desserts and grill the meat themselves.

Then? “We serve with a smile.”The years of working in fine dining restaurants and country clubs paid off.

“You need to care about your customer,” he said. The money will follow, he emphasized. The customer is first.

After establishing the three Jalapeños restaurants focused on Mexican cuisine, he ventured into an Italian bistro concept in Luna’s, adjacent to Regal Cinemas in Barkley Village.

Of his four children, three from his first marriage, one is part of the business. Daniel, who worked in restaurants during college and has training in graphic design and technology, will be Cantu’s successor. With Daniel’s know-how, they have upgraded three point-of-sale systems in-house, saving money in the process. During the COVID-19 crisis, they quickly set up a new online system to streamline orders and deliveries.

At 66, Jesse Cantu is definitely not thinking of retirement.

“I still have the passion,” he said. “There is a passion in creating something for the public.”