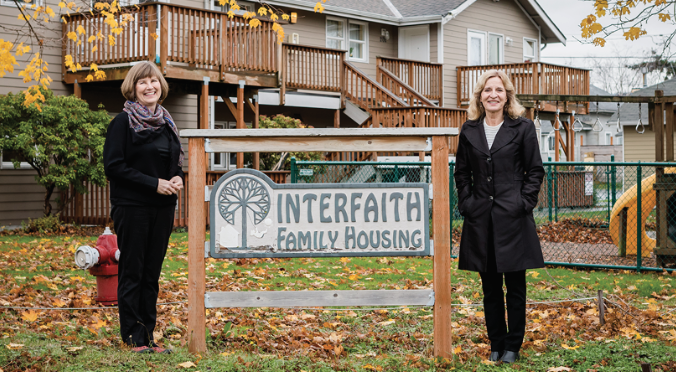 Locally, 1,499 people volunteer with the nonprofit Interfaith Coalition of Whatcom County. If they were employees, that would make Interfaith the fourth-largest employer in Whatcom County, according to 2019 data from the Center for Economic and Business Research at Western Washington University.

Since its beginning in 1981, the homegrown nonprofit has become a force. Now, in its 40th anniversary year, Interfaith includes 55 churches, a synagogue and other local partners working together to end family homelessness and poverty in Whatcom County. The breadth of its current outreach means that Interfaith’s actions are seen and felt throughout Whatcom County.

When Laura Harker joined Interfaith in 1992 as one of its first paid employees, the organization had fewer than half of its current number of congregations and fewer than a hundred volunteers. The nonprofit was just over a decade old that year. It offered affordable medical care and supported other nonprofits’ programs but had no housing of its own. Today, it has 14 housing units throughout the county to shelter families as they work toward self-sufficiency. Interfaith sheltered an additional 13 families in 2020 using existing church buildings.

Harker retired at the end of 2020 after 28 years as executive director. Deanna Wildermuth (see sidebar on page 14) is stepping into that role. This milestone transition offers a good time to look at the nonprofit’s evolution from a small band of volunteers to an impactful force in Whatcom County.

Becoming givers
One way to gauge Interfaith’s impact is to hear from those whose lives have been changed.
Yesenia and Eduardo Pulido and their children had a stable life in San Diego for 18 years until the restaurant where Eduardo worked was sold. Promised work in the Northwest, they moved to Whatcom County. Eduardo went to work but was never paid by his employer. The situation grew bleak, with the family of five living in one small room. But once in Interfaith housing, the family was able to change course. Now, as owners of Infusion Restaurant in Lynden, the Pulidos are financial donors to Interfaith.

Joel and Bethany Kennedy, married for 24 years with eight children, had been longtime tenants in a rental home when the owner had to sell. They found another rental, but when the rent ballooned beyond affordability, they were evicted. For months, the family slept in tents and vehicles while looking for a place to live. Moving into an Interfaith home for a year is allowing the family to rebuild their lives. “This has allowed us to begin giving back to the community, even as we continue to stabilize,” Bethany Kennedy said.

Jessica (name has been changed) and her 6-year-old son were fleeing domestic violence. When Jessica found she and her son could live for a year in a little Interfaith house in an appealing Bellingham neighborhood, she cried with relief. Her goals, she said, are to “have a great job and take care of my family. I never want to rely on someone else.”

In her nearly three decades with Interfaith, Harker has been part of the solution to countless stories like these. “We bring together diverse congregations who put aside differences to focus on responding to human need and a desire to serve our neighbors,” Harker said. “A motto is: though we may not believe alike, can we not love alike?”

“We connect folks who want to donate or volunteer with folks needing help,” Harker added. “Interfaith is truly neighbor helping neighbor. My work has never been a ‘job,’ but a vocation in the truest sense. Never have I felt so much a part of a real coalition. Together, we accomplish so much.”

In Harker’s early years with Interfaith, the nonprofit was focusing on affordable health care for low-income people, through the Interfaith Community Health Center. The need for that service — more than 19,000 patient visits in the year 2000 — necessitated a move in 2001 to its current Unity Street location. In 2015, the health care program separated from Interfaith and became the independent Unity Care NW.

Interfaith had started its embryonic housing program in 1994 when construction began on a four-unit apartment building in Bellingham, to provide housing for families as they transition to long-term housing. (Interfaith recently named that 26-year-old fourplex Laura’s Place, in honor of Harker.) Case management was an important part of the housing program from the beginning; today case managers continue to work with families on goals that lead to self-sufficiency.

What Interfaith does
Interfaith today has seven programs.
Family Housing is its primary one. This is the only emergency housing in Whatcom County (other than motels) that keeps all types of families together, including families with adolescent sons (boys older than 12 are not allowed in women’s and children’s group shelters).

Families moved into Interfaith’s first four-unit apartment building in 1995. The number of housing units grew over the years, and in 2019, Interfaith’s first-ever private donor, Susan McClendon, contributed the use of a house, bringing the current number
to 14.

That number will soon grow again. Interfaith received its biggest single donation in its history when longtime volunteer Noriko Lao donated her Bellingham home in May 2020 as she moved into a retirement community (she is now deceased).

Interfaith’s Family Promise of Whatcom County brings congregations and other sites together to feed and temporarily house more homeless families. It’s part of an effort that began in New Jersey in 1986 and has grown to 200 affiliates across the country. Interfaith launched Family Promise of Whatcom County in April 2018. Before COVID-19, up to four families at a time were fed and sheltered overnight in a local church building, rotating to a new site every week. Volunteers provided breakfasts and dinners, plus conversation, homework help and playtime for youngsters in the evenings.

The CAST program serves a (socially distanced, outdoors) simple meal of sandwiches, fruit and drinks to anyone in need three evenings a week at the Arch of Reconciliation behind the library in downtown Bellingham. About 130 volunteers participate on a rotating basis, purchasing supplies, making sandwiches, transporting and serving. In 2020, CAST served 3,300 meals.

Kids Need Books, created by donor and volunteer Joe Nolting, distributes donated books free to children in need at food banks, migrant worker camps and other sites. A retired teacher, Nolting and other Interfaith volunteers distributed 19,284 books in 2020. They have given out 108,224 books since Nolting launched the program in 2016.

The Winter Coat Drive occurs in October, with more than 3,000 coats collected and distributed at sites in Bellingham, Ferndale, Blaine and Deming. Project Warm Up involves volunteers who knit 1,200 hats, scarves, baby blankets and mittens to distribute. Holiday Gifts connects families in need with gifts purchased by businesses and congregations.

Transforming volunteers
“Interfaith makes a personal connection between volunteers and our neighbors needing assistance,” Harker said. “Our goal is to transform the volunteers as well as folks we serve. Years ago, Interfaith operated severe weather shelters, and I heard over and over about the connections volunteers made with shelter guests. Volunteers working overnight shifts would stay up all night, many times enjoying visiting with guests.

“We also had guests that become volunteers. This happens with CAST and Family Promise as well. This makes Interfaith unique — we bring our entire community together and break down misconceptions about folks experiencing poverty.

“This theme, as well as the theme of Interfaith’s programs evolving through the years to meet the greatest needs, has been with us throughout our 40-year history.”
The decision to retire is bittersweet, Harker said, though she is looking forward to becoming an Interfaith volunteer.

Her joining those ranks will bring the number of volunteers neatly to 1,500 as Interfaith’s 40th anniversary year begins.

Seeking new location
Interfaith Coalition, a local nonprofit that works to get families out of poverty and into homes, is seeking a new home itself — one that’s 6,000 to 8,000 square feet and within walking distance of bus stops.

Interfaith has nine employees, five of those part-time, but manages 1,499 volunteers and seven programs. Currently, its staff members are in two locations on opposite sides of town.

“It’s way too much time lost in transit for meetings and inefficient for communication among staff,” said Barbara Mathers-Schmidt, chair of Interfaith’s property acquisition committee. “We need those people in one building. This kind of work involves challenging and complex conversations, and that is best handled in person.”

The building would include some emergency housing for families served by Interfaith’s Family Promise program, meeting spaces for families and service providers, and space for workshops open to the community.