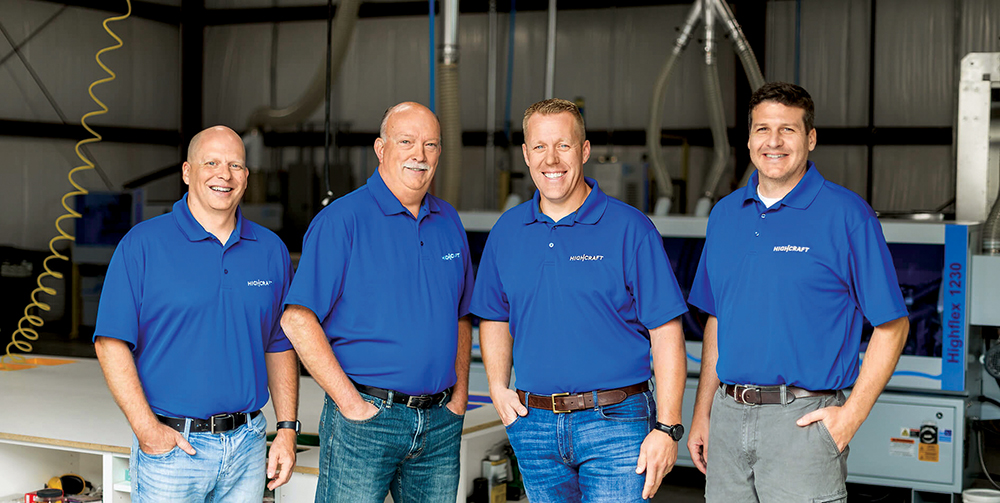 At the age of 80, Bob Van Hofwegen is still crafting custom cabinets. His shop—Van’s Cabinets—is now closed, but it still sits on a bucolic stretch of East Wiser Lake Road in Lynden, where he can be found puttering away on projects. The business itself has been taken over by Van Hofwegen’s sons, Eric and Jason.

Now, with a new location and a new name—HighCraft Custom Cabinets­—Van Hofwegen’s sons are aiming to take their father’s humble beginnings to a new level, using a process known as lean manufacturing, which aims to keep waste and costs low while keeping employees happy and productive.

The longtime friends often met at their sons’ sports games, and the idea came about while they were having a beer after a game. Kuik asked Eric Van Hofwegen if he’d like to see his craft turned into a company. “It was a casual conversation that became serious real quick,” Kuik said, laughing.

Now located in a pristine 4,000-square-foot shop near Ferndale, HighCraft Custom Cabinets primarily serves residential customers, but Kuik said their goal is to expand into commercial work over the next few years. They’re also interested in expanding their service area, which currently includes Whatcom and neighboring counties and British Columbia’s Lower Mainland.

Kuik, who was born in Ontario, Canada, said his business philosophy was partly inspired by a tour of a Toyota assembly plant in Japan. It had implemented a style of management that encouraged employees on the ground to communicate what works and what doesn’t to upper management.

Core concepts include respecting people and customers deeply, maintaining a clean work environment, and achieving a good workflow in the least possible amount of time. “It’s based on the idea that the people closest to the work understand the work best,” Kuik said.

Joel Eschbach, a cabinet maker and employee, agreed, adding that the company regularly encourages suggestions from employees during weekly meetings. One example included installing tools on both sides of a workstation so that employees don’t have to walk an extra distance just to get the tool they need.

“It’s often not a big thing (that impedes workflow),” Eschbach said. “It’s simply a lot of small things that add up.”

Kuik said they’ve met most of their financial goals so far. Last year, the company grossed $1.1 million and Kuik believes they’re on track to do $2.5 million in year two. The biggest challenge will be seeing if we can hit the $5 million mark in year three,” he said. “We’ll probably need a new facility by then, too.”