What happens when business owners retire?

More than 2,000 businesses in Whatcom County have owners who are likely to retire in the next decade. Without an exit-and-successor strategy, that translates into 17,000 Whatcom County jobs that could vaporize, according to a recent report. The $590 million payroll and $3 billion revenue those businesses currently generate show the possible impact if even a percentage of them liquidate after their owners retire.

Yet most business owners don’t have a succession plan, said Mauri Ingram, President and CEO of Whatcom Community Foundation, which collaborated with the California-based nonprofit Project Equity to produce the report. 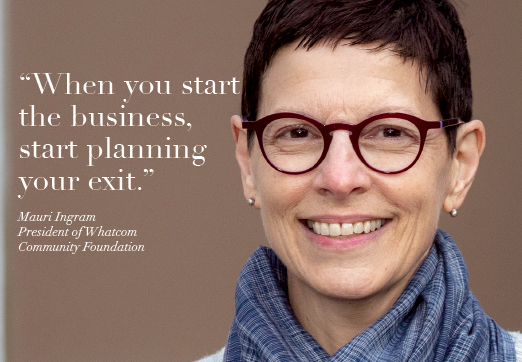 The wave of potential closures or sales is accelerating as today’s reinvigorated economy encourages aging owners to retire. This surge of baby-boomer owners looking to their next phase of life has particular implications for Whatcom County.

“It’s not universal; some businesses here pay very well,” Ingram said. “But that (general) depression in wages and salaries makes acquisitions here attractive to others.”

Advantages to employee ownership, in all its varied forms, include better wages and benefits, increased productivity, and better civic engagement, Ingram said, adding that “we feel differently about things when we own them.”

Seitz mentioned benefits that include motivated buyers, easier knowledge transfer, usually a smoother transition of leadership, more talent retention, and market/vendor familiarity. Drawbacks can include difficulty in qualifying for financing, lack of preparation for greater responsibility, and a costly, complex set-up process. But, “If all parties are willing to work, there are some amazing benefits,” Seitz said.

Nationally, employee-owned businesses are 25% more likely to stay in business, four times less likely to lay off workers during the last recession, have employees with 2.5 times greater retirement accounts, and showed 25% higher job growth over a 10-year period than comparable companies without an Employee Stock Ownership Plan (ESOP), according to the National Center for Employee Ownership.

Employee-ownership can deliver tax benefits to sellers who meet criteria, Ingram said. “Our emphasis is to make people aware of the options, and build up knowledge in the professional community here so it doesn’t seem so unusual. There’s so much upside for everybody: sellers, folks stepping into employee ownership, and the community as well.”

Plan exit when you buy

Larson Gross, an accounting and consulting firm in Bellingham, Lynden and Burlington, has assisted in business transitions for decades. Succession strategies they see locally include shifts to key employees, ESOPs, third-party sales, and family. All can be successful when tied to the owner’s goals, said Tanya Silves and Josh Turrell, both CPAs and Partners with Larson Gross, who supplied information in tandem via email.

What common mistakes do business owners make in exit-and-succession planning? Experts tapped for this article had the same answer: waiting too long to plan for it.

“Start thinking about an exit plan the day you open for business,” said Seitz. “Developing an exit plan early will inform many decisions throughout the life of the business: lease or buy real estate and equipment; job design and staff retention efforts; and even the owner’s retirement investment plans—all these decisions can be impacted by an exit plan, or lack of one!”

“When you start the business, start planning your exit,” Ingram said. “Get your plan in place. Things will have to be adjusted over time… but having a plan puts you in a better place.”

As soon as you have the title ‘owner,’ begin thinking of an exit strategy, said Silves and Turrell. In addition, owners often procrastinate on implementing their plan. Other mis-steps include lack of clear communication before/during/after, focusing too much on the transition itself, neglecting the potential success of the business afterward, and assuming a third-party sale is the only option.

To that litany, Seitz adds: not understanding how business value is determined; thinking buyers will pay for potential growth; not improving business fundamentals prior to sale; and not having documented policies and procedures in place. “Unfortunately, some business owners get to a point of feeling ‘I’m done, now I want to find a buyer’ and then try to market the business for sale… If a buyer is identified a few years prior to the owner exiting, a gradual buyout is a great way to transition.”

Small businesses are often unprepared for transition, unlike tech start-ups that plan from their inception to secure venture capital and then exit via sale to a larger company, or initial public offering.

It used to be that planning an exit was a step toward retirement. Now it’s more focused on the short- and long-term goals of the owners, regardless of age, according to Silves and Turrell.

Succession help also is available via the Whatcom Community Foundation and WWU’s SBDC. The SBDC works with owners to help them understand options, and with potential buyers to understand what’s required to purchase and continue the business. “It’s important to preserve the entity so the business will continue to serve our community, employ workers and contribute to our state and local tax base,” Seitz said.

Anvil Corp. is one Whatcom County business that chose the ESOP approach. The engineering and project management company launched in 1971. In 1996, its founder-owner transitioned to partial ESOP; in 2010, the company became 100% ESOP.

“The owner decided it was to his advantage to have Anvil continue as it was, not be absorbed by an outside entity,” said John MacPherson, who joined the company in 1971 and is now Chairman of the Board.

“He really wanted to retain the culture,” MacPherson said. “When I became President (of Anvil) it became a main goal to get to 100% ESOP. It was one way to make Anvil healthy for the long term. It’s our way of converting their sweat equity into real equity.”

ESOPs offer tax benefits to both owner-seller and employee-buyers. MacPherson said drawbacks are minimal, but include: “We spend money every year paying out people who are retiring. Also, going to 100% ESOP means leaders can’t own more of the company than anyone else. If one wanted to incentivize leaders with direct ownership, that wouldn’t work.”

ESOPs can be beneficial when there isn’t a clear answer to a successive owner, while family transitions allow the next generation to carry on established legacy, according to Silves and Turrell. The latter can include private financing and continuity for employees, vendors and customers.

Silves and Turrell added, “In Whatcom County, we’re seeing all types of ownership transitions­—from outside buyers looking to move to our beautiful corner of the world (or take advantage of our proximity to Canada and ports) to closely held family businesses transitioning to a third generation, and anything in between.”

One company’s progression into employee ownership

“We started building our succession team seven or eight years into the business,” said Carpenter. “We owed it to employees who showed up every day to have a backup, should something happen to me or Harry or both. The plan was clearly laid out in documents.

“Get a plan in place as soon as possible. You can always change it.”

Wood Stone trended toward employee ownership early on. During the first few years, banks wouldn’t lend them enough to pay for the talent they needed. So the founders sweetened the deal by giving potential employees a percentage of the business.

“It worked!” Carpenter said. “It got us an amazing team.”

From their pool of employee-owners, the founders chose who would replace them. “My function was president of sales and marketing, and finances. Harry was engineering and manufacturing. We were covered. All the key people, with key skills, were owners. It was perfect.”

But things change. Twenty-five years later, Wood Stone was worth so much that the successors balked at taking on the debt and personal risk that came with it. For years, only Carpenter and Hegarty had their names on the line for personal guarantees; other employee-owners had been protected in that way.

What to do? “Another privately held company approached us,” Carpenter said.

Henny Penny, an Ohio-based maker of commercial food-service equipment, was a second-generation, family owned business. Like Wood Stone, they didn’t have family who wanted to take it into the future.

Henny Penny acquired Wood Stone in early 2014 and within a year took both companies into one Employee Stock Ownership Plan, a well-known form of employee ownership.

Neither company could have accomplished that by itself. “ESOPs are not easy and they’re not cheap,” Carpenter said. “Oversight and compliance issues are extensive, and they go on forever. Henny Penny had the resources to do this for both companies.”

Even when you know and respect the suitor, the decision to sell was still huge. “You have a personal commitment to all the employees,” Carpenter said. “We knew them all. We knew their families.”

To Carpenter, the ESOP meant “we could give people ownership, get commitment, and help build the company.” The sale also meant stepping away personally. “Once you sell, you have no control. I was very cognizant of that.”