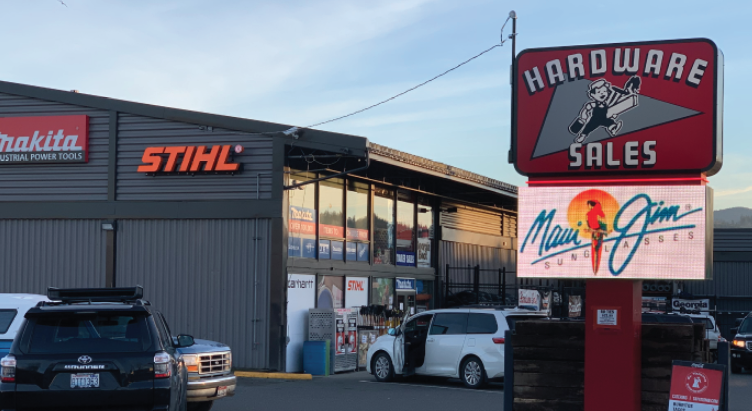 A Bellingham original, Hardware Sales stands tall not just as a survivor of the big-box era, but also as a steadily growing, perennial Top 100 company in Business Pulse’s annual listing of privately owned businesses.

Internet buying power has taken over as the top driver of revenues.

A third-generation family company, Hardware Sales ranks in the top quarter of the Top 100 local companies ranked by Business Pulse. Last year saw about 8.25% growth and added a dozen jobs, for a current employee total of 146. And that is despite being amid such national brands as Home Depot and Lowe’s (which have around 4,200 stores nationwide, combined) and Ace Hardware, which has four locations in Whatcom County.

And who would have guessed that one of the strongest products of the flourishing 2020, COVID-19-driven internet sales would have been chicken feed?

“Since the pandemic,” said Steve Douge, the director of e-commerce for Hardware Sales, “our online sales of chicken feed is up over 100%. We shipped close to three million pounds of chicken feed and supplements.”

Another partnership spurred that surge: Hardware Sales has become the national distributor for Scratch and Peck Feeds, the Bellingham startup that 10 years ago was among the finalists for the Business Pulse Startup of the Year award. A family-owned entity like Hardware Sales, it has grown rapidly on the strength of using locally grown ingredients and having been the first in its market to earn both organic and non-GMO certifications.

Several other product lines rang up for HardwareSales.com on an exponentially larger scale wrought mostly by the shuddering and shuttering effects of COVID-19 — stay-in-place, do-it-yourself trends — and by natural disasters.

“We always do well with generator sales, especially any time of natural disasters,” Douge said. “We had more hurricanes last year than any other year in recorded history, and the fires on the West Coast have been especially devastating. We’re happy to make generators and pumps available. We’re also seeing a surge in sales for these items for use in general disaster preparedness. People see all the things that 2020 brought and they wonder what is next, and they try to prepare.”

Douge added that products related to woodworking “have done very well for us, with more people stuck at home. They have more time on their hands to invest. They’re spending their vacation money and savings from not eating out on fixing up their home and on their hobbies.”

Hardware Sales typically sees a surge in woodworking sales during winter months, Douge said, but throughout the pandemic, and with the holiday season approaching, sales have become stronger and stronger. Plus, with people staying home, Hardware Sales has seen an increase in products related to yardwork and repairs or other improvements around the house, he said.

The internet sales division, though described by company owner Ty McClellan as “a rocky road” ever since it started, has been bulging at the seams since purchasing Douge’s small internet marketing company in 2006. The online sales team started in the main store on James Street but quickly ran out of room, Douge said. So the company bought a nearby warehouse, outgrew that, rented another building next door and eventually rented another building across town.

In 2008, Hardware Sales built its own 20,000-square-foot warehouse in Ferndale and added 12,000 square feet three years later. That facility, with its 20 employees, is now the home base of the online operations.

Amazon fuels the operation — so much so that in 2018, Hardware Sales leased a 53,000-square-foot warehouse in a suburb of Indianapolis, to accommodate growth. The lease primarily met Amazon’s requirement for second-day shipping to the East Coast. That facility employs 10, led by Tyson Simmons, the former Ferndale warehouse manager.
“We have years of expertise managing the third-party selling space,” Douge said, “and we’ve focused our efforts on being experts at Amazon.”

He said that about 80% of the company’s online revenue comes from the Amazon platform (which, by the by, corners about half of the world’s internet transactions and, at 2.5% a year, doubles the average growth rate of all other e-tail platforms) and the rest from the eBay marketplace and the company’s own website.

“We manage several brands on Amazon.com, (which) purchases products directly from manufacturers and allows other retailers to sell on the platform,” Douge said. “Amazon provides three main things: One, the recognizability of its website. Two, Prime shipping. And three, its customer service policies.”

He pointed out that customers want to know what they are dealing with, which they get with Amazon.

“Good or bad,” he said, “it’s mentally much easier and perceived as safer than dealing with many different websites all with their own policies and expectations.”
Hardware Sales distinguishes itself by providing what Amazon delivers but with more customer-friendly benefits.

“We’re much easier to work with,” Douge said. “We don’t just buy and sell. We manage the listings, maintain the integrity of the data, use best practices to increase exposure to the listings and create a higher conversion rate for more sales.”

“The manufacturers get a much better experience working with us,” he said, “and they sell more products. Amazon also wins because they take a cut of each sale and don’t need to do any work for that cut.”

The internet shopping trend is looking like it will continue in 2021, Douge said.
“Online sales are up across the board,” he said. “It’s generally easier to purchase online and safer to avoid retail spaces.”

Hardware Sales has benefited greatly from that consumerism.

“We’re lucky to be in an industry that has grown during the pandemic,” Douge said.