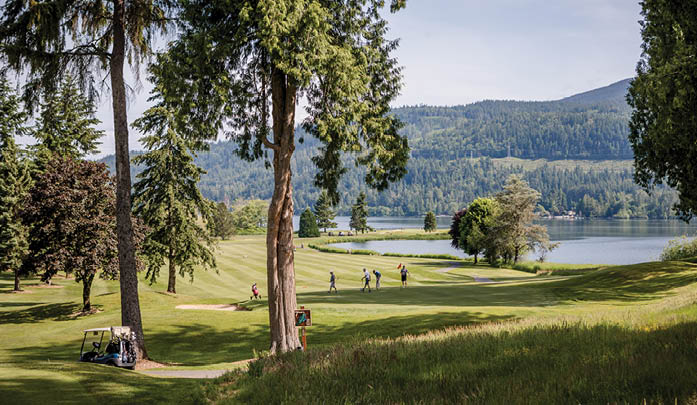 This summer, the fairways at Sudden Valley Golf & Country Club are dotted with golfers playing the game on the scenic 18-hole course that borders Lake Whatcom and a wooded ridge.

Brian Kruhlak, the director of golf, and his staff aren’t taking the current activity—the thwack of clubs against golf balls, the rumble of golf carts, people’s smiles at the end of a positive round of golf—for granted.

Usually, the course is played throughout the year, even in the worst of weather, Kruhlak said. He had no reason to think 2020 would bring in negative new realities.

Mother Nature dumped a lot of snow in February, but that closure didn’t pose as great a challenge as what was coming, he said. Eventually snow melts away. The coronavirus showed up. Thousands of business managers and owners around the state learned they would have to stay closed due to the pandemic. Spring arrived, bringing long, grueling weeks of uncertainty. The golf course took a big hit in terms of membership renewals, and the club was forced to lay off several employees, Kruhlak said.

The pandemic and stay-at-home order “was an impact like we never expected or anticipated,” he said.

Meanwhile, the golf course needed to be kept up to par. Kevin LeDuc, the course’s head golf professional, moved over from managing the golf shop to working on the maintenance crew full time during the closure, and Kruhlak took turns mowing the turf. Volunteers from among the members contributed many hours to helping keep the course in good repair during the closure, he said.

With other business leaders, he waited to hear when the course could reopen, albeit with safeguards for social distancing. Kruhlak said it was difficult to describe how enjoyable the May 5 opening day was.

“My daughter, Kylie, who was checking players in on the first tee, told (me) that she couldn’t believe how many grown men and women told her that it felt like Christmas morning,” he said.

Once again, golf was in full swing at Sudden Valley.

He entered the Professional Golfers’ Association of America Apprentice Program in 1990, and that led to his becoming a full PGA member. In 1992, Kruhlak accepted a position with Avalon Golf Links in Burlington.

Kruhlak returned to Sudden Valley as the director of golf in February 2011.
The course was developed by Ken Sanwick of Sudden Valley Inc. It opened in 1971 and was purchased several years later by the Community Association of Sudden Valley, Kruhlak said.

The course has remained substantially in the original layout, with the front nine and back nine hole portions differing radically from each other. Golfers feel as if they are playing two different experiences, Kruhlak said.

“Sudden Valley really is a stunning piece of property,” he said. “A course like this wouldn’t get developed today, almost certainly.”

The front nine looks out onto Lake Whatcom and Stewart Mountain, and the fairways are relatively open and flat, according to the golf course’s website. Golfers experience a different type of play when entering the back nine, with its elevation challenges. People need to keep their shots tight in that area so golf balls don’t disappear into the evergreens, Kruhlak said. Sudden Valley features more than 50 bunkers (depressions topped with sand), and 13 of the 18 holes (including every hole on the front nine) has a water hazard, he said. Although the back nine has five holes without water hazards, the trees make up for that.

Sudden Valley is a private golf community with over 400 active members, Kruhlak said. The course is one of the reasons people move to Sudden Valley, he added. The community offers a variety of amenities, including parks, hiking trails, waterfront access and a marina.

Although the course is owned by the association, people who live outside Sudden Valley golf there, with golf enthusiasts driving from Bellingham, Seattle and Vancouver, British Columbia. Tournaments and events held at Sudden Valley include the 2019 Washington State Women’s Amateur, the 2019 U.S. Senior Open Qualifier, men’s and women’s invitationals, junior club championship events, and events held by local charities and business associations.

Events that occur from October to March are played in all types of weather with an average of 100 participants, Kruhlak said.

Golfers choose from different options to traverse the course. If foot power isn’t their choice, traditional golf carts are available for use. The facility also offers GolfBoards, four-wheeled vehicles that resemble motorized skateboards. Kruhlak said he often hears riders say how much fun they have on the GolfBoards.

“You ride them kind of like a snowboard, with a spot up front designed for carrying the golf bag,” he said.

The golf course also offers FootGolf, a sport that combines soccer and golf, on the front nine. Participants kick the ball along an 18-hole FootGolf course, with each hole designed as a par 3, 4 or 5.

Kruhlak hopes the coronavirus crisis is past.

“The demand for golf has been pretty strong once we opened,” he said. “That makes us hopeful we can carve out a decent year.”

A Landmark Rises From the Ashes

Giving a leg up to those with disabilities