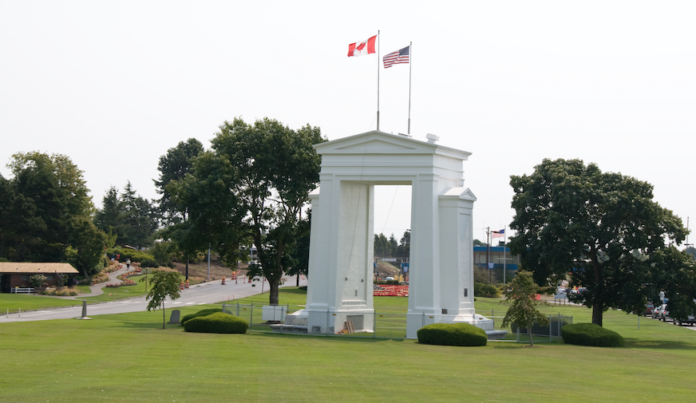 On March 21, Canadian and American border authorities agreed to limit border crossings to essential travel in an attempt to mitigate the spread of COVID-19. Since then, officials in both nations have repeatedly extended the closure. Several border policy experts in both countries expect the travel restrictions to extend to at least the end of 2020, depending on the development of effective therapeutics, a safe vaccine or a sudden retrenchment of the virus.

The impact of the border closure on Whatcom County’s economy and communities has been severe. Point Roberts — a community of roughly 1,300 people isolated from the rest of Whatcom County — requires two border crossings before residents can visit the rest of the county’s grocery stores and other retail outlets for basic supplies. The border closure also isolates Point Roberts from the rest of the United States. (At the time of publication, a short-term, emergency transportation ferry service has been implemented.)
It isn’t just Point Roberts. Other Whatcom County communities have felt the sting of the border closure. Most businesses in Blaine depend on Canadian visitors. With the number of daily vehicle crossings falling from roughly 12,000 to just 400, local businesses have struggled to stay open. In Sumas (and Blaine), the loss of 60% to 70% of gasoline sales tax revenue may lead to drastically smaller public budgets.

“Canadian shoppers are responsible for roughly 11% of Whatcom County’s sales tax revenue, and we anticipate that retailers lost $54 million to $65 million in sales revenue from Canadian shoppers in Q1 and Q2 2020,” said Laurie Trautman, director of the Border Policy Research Institute at Western Washington University. “Industries like tourism, recreation and housing have also been impacted by the closure. While we do not have a complete picture of the impact Canadian visitors have on the Whatcom County economy, we do know the closure of the border has a serious effect on our community’s financial health. And the effects of the closure will not end when restrictions are lifted. By that point, many Canadians will have altered their shopping habits, and their old preference for Whatcom County may be slow to return.”

The impact of a closed border extends beyond the economy. Many families are essentially divided by the border. One spouse may work on the American side while another works on the Canadian side. Depending on the work and whether authorities deem it “essential,” some families find themselves indefinitely divided. Spouses have had to temporarily live apart to continue working. Parents may not be able to visit their adult children, and vice versa.

“Given the indefinite nature of the pandemic, policymakers are working on finding ways for some businesses and families to safely conduct cross-border travel,” said Don Goldberg, director of economic development for the Port of Bellingham. “However, this is challenging. The Canadian government does not have a piecemeal border policy. Whatcom County’s COVID numbers may be manageable, but as long as the United States remains a hotspot, the border will probably remain closed — or at the very least continue to operate under tight restrictions.”

The one thing experts are sure of is that a potential date for the resumption of normal border traffic remains highly uncertain. Until a safe, effective vaccine is available, public health experts, regulators and elected officials will remain hesitant to allow the normal flow of cross-border traffic to resume. And, as long as the border remains closed, communities like Point Roberts and Blaine will continue to struggle. Their geography limits any ability to implement an economic development strategy or solution independent of Canadian visitors. There is not much for those communities to do other than sit and wait until safe travel returns or policymakers devise an alternative strategy.

As of this writing, Sens. Patty Murray and Maria Cantwell and Reps. Suzan Delbene and Rick Larsen have taken up Point Roberts’ cause, asking Richard Mills, the acting U.S. ambassador to Canada, for help creating a workable solution that allows residents of the community to safely travel to the rest of Whatcom County and the United States. Rep. Delbene has argued that the interpretation of current COVID-19 regulations is so strict that it could prevent residents of Point Roberts from receiving proper medical care, along with preventing access to basic essentials.

While a solution may be in the works, as of this writing the residents of Point Roberts remain isolated from the rest of the nation. While officials have suggested that Point Roberts residents could leave their community and arrive on the mainland via the Peace Arch border crossing without ever exiting their vehicle, border officials appear unmoved by their plight.There are no simple answers. Opening the border presents a risk of the additional spread of the virus. If a reopening is done prematurely, it would likely result in a re-closure of the border. As bad as the closing is, opening and then re-closing the border could create unbearable uncertainty for area businesses and families—and there are some economic benefits to the closure, at least on the Canadian side.
For years, Canadian shoppers have crossed the border to shop for essentials, including dairy, produce, meat and gasoline. These staple items are almost always cheaper in Whatcom County than they are on the Canadian side of the border. That is one big reason Bellingham’s Costco is so large and so busy — or, at least, why it used to be busy.
(It is also one reason the Bellingham Costco is regionally famous. This author met a Vancouver businessman at a meeting in St. Louis this past February. When he asked me where I was from, I said Bellingham. He responded with an enthusiastic, “Oh? We shop at your Costco!”)

Because of the closure, Canadian shoppers who previously frequented the aisles of the Bellingham Costco are now forced to buy their food and fuel at Canadian stores. The border closure is a real-life economic experiment. What happens when some localized benefits of globalization go away? For many Canadian shoppers, it means that the cost of basic goods increased immediately. But for British Columbia businesses, it means Canadians are forced to shop locally. Those businesses no longer have to compete with cheaper American counterparts. The same experiment is occurring along the country’s southern border, where American shoppers are forced to purchase health care and other essentials from American providers rather than acquiring cheaper Mexican alternatives. The result is a consumer population experiencing rising expenses while local businesses suddenly see an influx of consumers who previously enjoyed lower foreign prices.

The border closure will probably receive continued support from some Canadian businesses while Whatcom County companies scramble to develop strategies that rely solely on domestic clientele. Had it been the other way around — if a sudden shift in border policy had positively impacted Whatcom County businesses instead — many of those companies would likely have voiced support for the change. That is just the way free-trade politics shake out: the winners find something to like, and the companies that come out on the short end remain unhappy.

While the closure has had a mostly negative impact on the Whatcom County economy, there is some good news. The Port of Bellingham reports that truck traffic remains close to pre-pandemic levels, meaning that there has not been a significant reduction in trade between the two nations. Director Don Goldberg also reports that a Canadian manufacturer recently committed to purchasing a 50,000 square foot facility in Whatcom County that will add at least 40 to 50 high-paying jobs.

Creating a plan that limits significant economic damage in the aftermath of a border closure is next to impossible. The geography of Whatcom County is unavoidable. The county’s economy will always depend on cross-border travel and trade. Point Roberts, Blaine and Sumas will always feel the impact of a Canadian border closure in a way few other communities can understand.

The future of cross-border travel and a full reopening remains cloudy. The development of a safe, effective and widely adopted vaccine will almost surely determine when the border will reopen. In the meantime, businesses and families on both sides of the border will continue to adapt to a new reality. One thing Whatcom County residents can do to mitigate the economic impact of the closure is shop local. Whenever and wherever possible, local consumers can help by spending their money within the county. While shopping local won’t replace all the lost Canadian revenue, it will help.

Ordinary citizens and businesses can’t produce a vaccine or change the border policies of two separate nations. But they can, where possible, help by frequenting local shops and retailers. So, until the border reopens, follow the advice of one great American — Mr. Fred Rogers — and be a helper. Shop locally, and hopefully your favorite Whatcom County retailer will come out of the pandemic ready to serve shoppers from both countries.