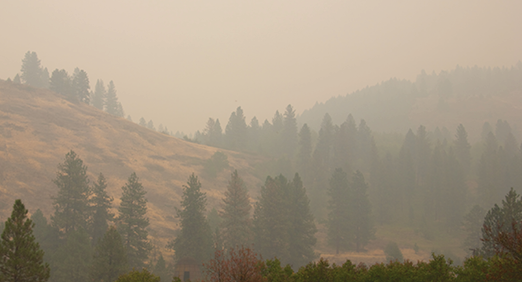 This article, originally published June 3, 2022, at whatcombusinessalliance.com/news, has been updated to reflect recent developments.

Now that summer is here, so is wildfire season in our state, unfortunately. Some of our summer days and nights probably will be impacted by the smoke that these fires produce, even if they are hundreds of miles away from where we live and work. It is something that we have learned to adapt to, especially over the past few summers. This is especially the case for those who work outside, whether it is in farming, construction, hospitality or landscaping services.

What you need to know
The Washington State Department of Labor & Industries has announced the state’s “emergency” rules, in effect from June 15 until the end of September. The rules apply to workers who are outside at least 15 minutes in an hour.

This is something that may impact your business and workers, even if you initially didn’t think your business would be covered. For example, beyond construction and agriculture, some of the impacted industries include retail delivery drivers, lumber yards, equipment servicing and nursery workers.

It’s important to know about these new statewide regulations and then voice your concerns — both about the “emergency,” which allows L&I to implement these rules without having to assess the cost to business, and during the regular rulemaking process, which should take place later this summer and could lead to permanent rules for future summers.

According to the Washington Retail Association, the recently announced rules will require employers to include wildfire smoke response and outdoor heat exposure in their written accident prevention plans and train workers and supervisors on the hazards, mitigation steps and plans for responding to related problems before they are allowed to work in “excessive” heat or wildfire smoke conditions.

When wildfire smoke conditions reach an air quality index of 101, requirements will include providing respirators and limiting employee exposure to smoke. At an AQI of 69, employers are encouraged to reduce, reschedule or relocate work; provide enclosed buildings or vehicles where the air is filtered; provide respirators for workers; and reduce work intensity or increase rest periods.

Businesses have expressed concerns that the state, through L&I, is undertaking emergency rulemaking when no emergency is present. We all know that summer is coming, and with that, wildfire season, so there should be a regular rulemaking process. This would provide adequate time for businesses and workers to provide input and for a cost-benefit analysis of the proposed rule to be created.

Why did the agency not go through this process this past fall, right after the wildfire season? The agency has had months to develop new regulations rather than propose a new “emergency” rule a few weeks before it will go into effect.

And why was this issue not addressed during this year’s legislative session, when the governor and our elected representatives could have played a role? This is, instead, another example of unelected bureaucrats making decisions with no accountability.

What others are saying
The Building Industry Association of Washington, which represents small and large construction companies across the state, has raised general concerns about the need for and the legality of these rules. More rules, it said, “only add complexity for Washington builders with little or no added protection for workers. We’re also concerned they’re proposing an emergency rule when they started the permanent rule-making process nearly a year ago and had plenty of time to adopt rules under the proper process.”

Businesses, of course, agree with the goal of protecting workers who conduct their jobs outside. The problem is with the process; any protections should be created with scientific evidence, review, common sense and cost-benefit analysis, which are not always part of emergency rulemaking (and in this case there is no “emergency”). Having another emergency rule without a full process places a heavy burden of compliance, planning and investment of supplies and training on employers of all sizes.

In an article in Capital Press, Tom Davis, the Washington Farm Bureau director of government relations, criticized the department’s timing and failure to do a cost analysis required of a permanent rule: “How can they justify an emergency? It gets hot every summer. A lot of farms have done their safety and heat training.”

Washington Policy Center’s Pam Lewison offered this perspective on managing workers who have to be outside: “Wildfire smoke and how to work within the confines of those cruddy days is, or should be, a concern for any employer with people working outside. Smoky days are miserable to work in (and I say that from experience as an asthmatic who has had to irrigate in them), but they are manageable when approached properly. Allowing L&I to put too fine a point on enforcement of what that approach looks like is perhaps not the best solution to a tricky problem.”

What you can do
It’s not too late for the Department of Labor & Industries to hear from you. I would also encourage you to contact the governor’s office and your local legislators, as they should also hear your thoughts, even if they do not have a direct role in this process (though they should). As mentioned above, the regular rulemaking period for this issue will probably move forward later this summer; Whatcom Business Alliance will keep informed you about a formal public comment period.

Dann Mead Smith, of the Mead Smith Group, works with groups such as Project 42, a new nonprofit organization created to change the course of Washington state. Dann lives part time in Birch Bay.