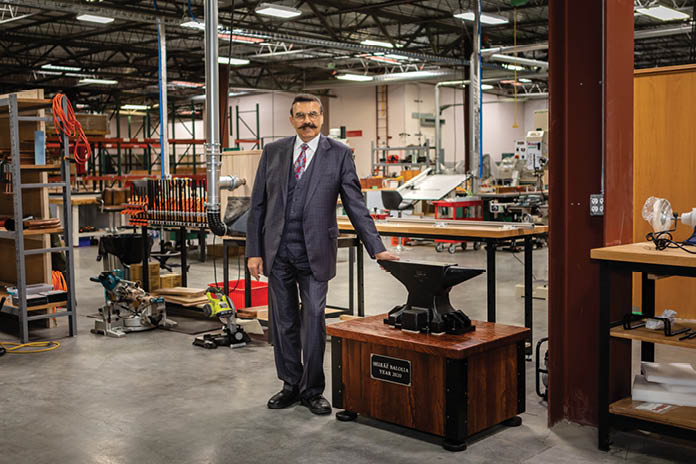 Shiraz Balolia made $6 on his first sale of a drill press. Now the sales of the company he founded in Bellingham in 1983 are in nine figures.

Balolia recently transitioned to chairman and CEO of Grizzly Industrial Inc. He promoted to president Robert McCoy, who started with Grizzly 30 years ago at age 18 as a warehouse worker. Balolia’s son, Shabir Balolia, who’s been with the company more than 20 years, remains vice president of Grizzly’s parent company, S. Balolia Holdings Inc.

This milestone transition is a time to look at the company’s evolution from a rented room behind a barber shop to the 800,000 square feet of showroom and warehouse space it has today in Springfield, Missouri, and Bellingham, site of Grizzly headquarters.

About that first drill press: After Balolia sold it, his customer said he had no way to get it home, so Balolia delivered it, no charge. When Balolia arrived, the customer added he couldn’t lift the machine onto his workbench, so Balolia did, no charge. “I didn’t think I was being taken advantage of,” Balolia said. “I thought, I have $6 more in my pocket than I had this morning.”

In those early days, Balolia was mainly buying used metal lathes, fixing them, and selling them for a slim profit. His idea was to make enough money to buy a lathe for himself, but he soon realized he had an embryonic business. “I had requests from people for new machines, and other types of machines. That was the start of what eventually became a very large business,” Balolia said.

Today, Grizzly is a machinery and tools company with customers that include small, home-based shops and such companies as Boeing, Ford Motor Company, NASA and the U.S. military. Products include woodworking and metalworking machinery—from benchtop models to large, industrial machines used by oilfields—plus laser cutters and other specialty machines.

“Drill presses were popular (in the early days) because I was selling them so cheap,” Balolia said. He’d use his Volkswagen van to deliver them, loading several machines at once. “Vans are not made for that kind of weight. I was almost scraping the bottom of the road, but I drove slowly.”

When other dealers complained because Balolia was underselling them, the distributor stopped selling to him. So, in those pre-internet days, Balolia searched brochures, hoping to find contact information for a supplier. “Out of all the brochures from several dealers, only one had the name and address of a factory, in Taiwan,” Balolia said. “That changed my life.”

He began to order directly from that factory. Hence was born a foundation of Grizzly’s business model: eliminate middlemen and pass the savings on to customers. The usual path in this industry is manufacturer to distributor to dealer to end user.

“My goal was to serve customers like myself,” said Balolia, who remains a hobbyist user of the machines his company sells. “I wanted to keep the price low, keep it affordable to buyers like me,” Balolia said. “Business took off.”

Customer requests continued, and Grizzly expanded. Balolia tells of an early customer who asked for a planer. Balolia didn’t know what it was, so he took an evening trade school course in woodworking. That sparked Grizzly’s expansion into woodworking machines. Personally, Balolia is an accomplished woodworker.

“I was the first in North America to send a planer sample to Taiwan,” Balolia said. “Now all the planers come from Taiwan.”

Grizzly rented space on Meridian street in 1983, outgrew that, purchased 10 acres on Valencia Street, and in 1987 built its headquarters there as its product line continued to expand. Grizzly has the largest selection of woodworking and metalworking machinery under one brand in the world, and it is the only direct-to-consumer industrial machinery company in the country.

“Our goal was, you come to us, and whatever flavor you want, we have. That really works well for us.”

In 1987, the company also acquired a warehouse in Williamsport, Pennsylvania, to lower shipping costs and delivery time to East Coast customers.

As customer requests continued and the company sensed a larger potential market share, in 1999 Grizzly opened a larger facility in Springfield, Missouri, which became the major distribution center and call center. “We got exponential growth from that,” Balolia said. “We own 55 acres there. There’s plenty of room to add more space.” (An additional 60,000-square-foot building is now permitted for construction.) The Pennsylvania location eventually closed, with some employees moving to Springfield. Today, the company has 200 employees in Springfield, 100 in Bellingham and 15 in the China and Taiwan offices.
In the early ’90s, with the internet starting, Balolia thought: “This is the future.”

“We recognized opportunity and built a base for it,” Balolia said. “We have a large IT department and a great website. We bought domain names and own over 300 URLs.” The company produces a print catalog but makes all manuals available online. “We have the largest parts department in the machinery and tool industry,” Balolia said. “We keep most parts in stock and ship the same day.”

The direct-to-consumer model enabled Grizzly to be ahead of the curve, Balolia said. In today’s online shopping climate, that’s the model customers want, he said.

“Our customers are the reason we’re here. We have over 3 million customers who’ve helped our company grow, so we are loyal to them, too.”

As for suppliers, the Taiwanese manufacturers were small at first, Balolia said. “They grew as we grew. The owners are friends of mine. Some only make for us.”

In 2011, Grizzly acquired South Bend Lathe Company, an industry icon founded in that city in Indiana in 1906. “Every United States Navy ship that rolls off the shipyard has a South Bend lathe on it for onboard maintenance,” Balolia said. “I’m very proud of that acquisition, as I had been after that company for many years.”

The decisions Grizzly makes are based on what customers are looking for, Balolia said. That’s the perspective that has helped drive the company.

“We are always looking for the next thing,” he said. “What does the consumer want? We keep expanding our lines. We offer CNC machines (computer-controlled machining tools), but manual machines remain. That’s our base.

For consumers, this is the best time. They can get the best buys, best choices, and see that quickly… We can satisfy those goals easily. We want to bring good quality products and good choices at a low price. That’s what we do.” ■