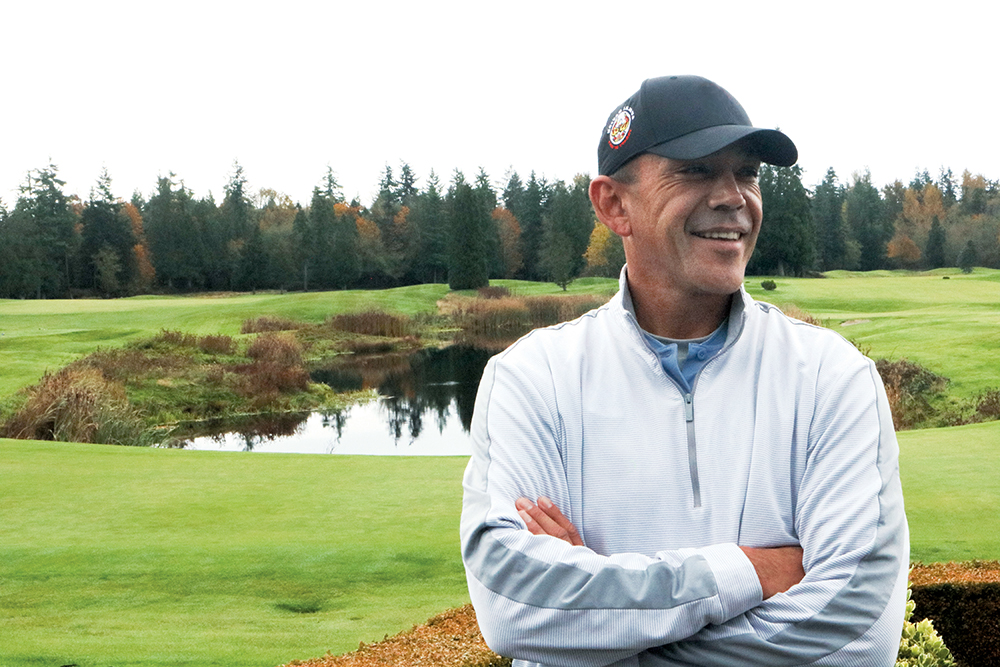 In his third term—ninth year—on the Lummi Indian Business Council (LIBC), Jeremiah (Jay) Julius serves as Chairman. The 11-person council governs the sovereign Lummi Nation. He is a man of many passions: fishing, golf, husband and father of three, Thai noodles. And love of Lummi culture and traditions that fuels his desire to help lead continued prosperity. Though a fisherman by trade, he succeeded in entrepreneurial ventures in California. Jay visited with Mike McKenzie about the LIBC’s vision, projects, and spirit, and a collaborative style in getting things done.

Business Pulse: What’s on the front burner with the LIBC?

Jay: We have several large projects going on. A park and baseball fields, lighted sidewalks, Slater Road and I-5 development, a new health facility. It’s a fun, exciting, busy time.

What kind of health facility?

A 50,000-square-foot clinic is going up across the street from our government building on Kwina Road, a state-of-the-art facility. 10% of the design is done. We’ve hired KMD Architects out of Seattle. We’ll break ground in 2020.

It was much needed because our health clinic that was built in the late ’70s gets tens of thousands of visits each year, and it’s falling apart. The new one will triple the size, and service the healthcare needs of our people as well as other tribes in our region.

What’s all the work across from the Casino?

That’s the first phase of the Lummi Nation Community Park, starting with seven acres of a park, paths, and two lighted baseball fields. This type of project is a big need for our community, and seen as a prevention method for our youth. It allows children and families to come together for healthy and fun activities.

Where are the new sidewalks?

Lighted sidewalks are going in on Lummi Shore Road stretching from Northwest Indian College campus to Scott Road. This is important because many people walk to and from school and work, which can be dangerous, especially when it’s dark and in inclement weather. It’s similar to what we did a few years ago on Haxton Way from Kwina to Slater. Next we’ll do the same going south on Haxton.

It’s been written that the I-5/Slater project is a truck stop. Is that accurate?

Salish Village is under way, although we still have multiple visions for it that we’re considering. We have studies in the works for an indoor water park, a fueling station, and for retail.

We’re very cautious about retail because of tax situations—tribal, state, county, City of Ferndale, etc…nobody likes to pay double taxes, and that impacts the cost of goods on our properties. We also must consider the impact of cyberspace—Internet shopping. We want to focus on where retail is trending.

We’re not certain about that. Mainly, it’s important to us as we move forward to look at not just what’s good for us, but what and how things we do will complement the entire area—Bellingham, Whatcom County, Ferndale, everyone surrounding us.

That last comment seems to be your management style.

I want to lead with empathy and an open mind to all viewpoints, not fight all the time over things. I like collaboration and cooperation. We’ve illustrated that recently in dealings with the Port of Bellingham, with Ferndale, with Whatcom County, we’re working on some things with Blaine.

(EDITOR’S NOTE: The Lummi community park received support from Bellingham and Ferndale mayors, state legislators, the county health and parks/recreation departments, and Lummi Nation School, and might generate yet another grant from Washington Wildlife & Recreation.)

You have a strong background in business. What was it?

After growing up on the reservation and graduating from Ferndale High School (1993), a couple of years later I moved to Temecula, California. Prior to starting some businesses, I was an installation technician and in sales for Thunderbird, a casino-supply company.

What were your companies?

When online travel booking started getting big and travel agents were going out of business, we started an Internet travel company in 2007. Our company partnered with Apple Vacations, Travelocity, Hotels.com, Carnival Cruises, and other sources in a model that added a face to Internet booking all in one website. It let individuals own the agency and collect commissions by shopping price and booking.

Since you were elected to the LIBC in 2011, what council feats stand out for you?

Last spring we opened a new convenience store, the Lummi Bay Fishermen’s Cove at Gooseberry Point with a fuel station. It has the best cheeseburger in Whatcom County, too—with hand-made patties and the special Cove Sauce.

We bought Loomis Trail about a year ago from a Seattle group (EDITOR’S NOTE: Resort Semiahmoo LLC, 180 acres south of Blaine, $3.75 million). I’m especially proud of it because it not only provides a recreational economic boost, but it restored some significant cultural heritage. Semiahmoo peoples lived in villages there, and even though a treaty protecting them was signed with the United States, they were forced to move. Many moved to Lummi Nation, and many Lummi trace their origin and heritage to where villages were there.

But it’s a huge economic boost, too, right?

Yes. The property has a 16-room hotel and restaurant in the clubhouse building, and 42,000 square feet of meeting space. There’s a great wedding venue that has not been maximized. In the travel and recreation industry, it gives an additional amenity to the Silver Reef—a resort experience. The course is just 13 miles away.

How is it different from before?

We changed it from a private golf course to semi-private with tee times open to the public as well as Semiahmoo resort members. Golf is an expensive sport, and we’ve changed that at Loomis Trail.

Also, we have provided it as home course to both the Lummi Nation School (LNS) and Ferndale High. LNS has started a new golf program. And Ferndale made it to state tournament this year for the first time. We provide free locker storage in our clubhouse for the youths, which is especially helpful to those who aren’t old enough to drive yet.

I didn’t as a youth, but I play to about a 3 handicap now. I started when my company in California asked me if I played golf, and I said no but I’d be happy to go play with sales clients. It became a later-in-life addiction, as I traveled the world on many tours, played in the California State Open, and more. Heidi was a golfer’s widow.

A few years back, much discussion arose about a marina at Gooseberry Point where the ferry operates. Where does that stand?

We’re not pursuing that at this moment. We worked out a deal with the Port of Bellingham for our tribal fishermen. It involves mooring in Bellingham Bay and Drayton Harbor in Blaine. A marina vision has been talked about for 70 years, but there’s no funding for it, and it would not necessarily be at Gooseberry Point.

How does the Port deal work?

The negotiation was long overdue. It acknowledged what Whatcom Creek and that whole village area meant to our heritage. We received mooring rights for our fisheries, they received the ability to create infrastructure in areas where we have fishing rights. The most important point about the results, though, was that we were at the table. Not just on the menu. It acknowledged treaty rights. An important breakthrough.

Jobs is a hot-button topic. What are Lummi Nation employment figures?

Our most recent tracking shows about 2,000 full-time employees in multiple entities: Our government (including the Dept. of Natural Resources that manages the Lummi Bay Hatchery and Lummi Shellfish Hatchery); Lummi Commercial Company; Silver Reef Casino Resort; Northwest Indian College, and Convenience Stores, Deli, and Dock. That makes us one of the largest employers in the area.

That, of course, doesn’t count our fleet of about 600 fishermen. We have 250 registered boat owners who have a reserved right to fish under the Treaty of Point Elliot (1855). When you break it down, we have the largest indigenous fishing fleet in the U.S.

How do you sum up the Business part of LIBC?

Often, I think there’s a perception that we block jobs and hinder industry. That’s just not accurate. We have made great progress and created a lot of work opportunities, and not just for tribal members but hundreds of non-tribal workers at the casino, the college, and with contractors and sub-contractors.

But we’re far more than a casino and construction projects. We also make decisions based on preserving traditions and culture, and on taking care of future generations.

Preserving the past, while securing the future?

People can remember when out here there was nothing other than a Navy base. Then we had visions for Kwina Road. Now you’re driving past housing, and our government building, and the expanded campus of a what was a tiny junior college that’s now offering a four-year optional degree.

How do you put somebody in our shoes? It’s important to recognize that the rights we stand up to maintain were negotiated. We weren’t a conquered people. We acquired those rights in agreements with the United States of America.

Will you stay at the fore?

My term ends in November 2020. I’ll probably run again for a fourth term. But we elect a chair annually. It’s very demanding. But I don’t hold a candle to those leaders among our elders who stood up when we had no money and resources; they had vision and made everything happen.