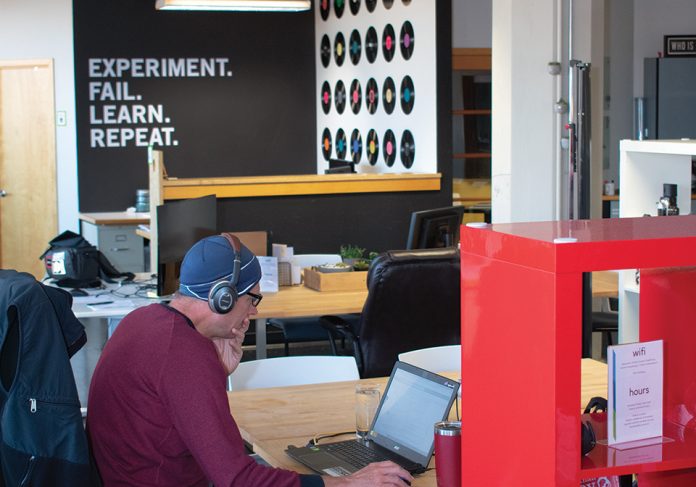 Headphones are a common sight at Invent.

Once considered a fad, shared working space has established a solid foothold in Bellingham. Enticing clients with benefits that range from ‘Waffle Wednesdays’ to extensive graphic design libraries­—the local competition for the wayward worker is heating up.

Bellingham and co-working spaces appeared to have a nice fling going earlier in this decade. Co-working spaces became trendy nationwide, drawing multitudes of clients who declared they didn’t need their own office space, let alone their own building. And Bellingham embraces those who go their own direction.

But far from becoming a one-night stand or a fad, Bellingham and co-working spaces have developed a long-term relationship. The “City of Subdued Excitement” has at least six co-working spaces, and the list of reasons people use them is growing. “They’re popping up everywhere,” said Tyler Byrd, owner of Invent Co-working, the largest of the six at about 4,000 square feet on the top floor of the historic Crown Plaza building downtown.

Jeremy Hendren said, “Every co-working space has a different personality,” He is the Business Manager at The Office: Co-working at Gateway, located inside the Gateway Centre Executive Suites building.

Co-working spaces universally consist of a type of serviced office, usually occupied by independent or otherwise unconnected workers or businesses, according to Statista.com. The spaces generally support a shared working environment, and the majority of co-working members work in an open-office environment. The concept is believed to have started in San Francisco in 2005, when high-tech entrepreneurs shared a space.

They opened the same year that Invent Co-working converted to co-working operations under that name; previously their space was home to an incubator for tech innovators and inventors called the Idea Lab. Byrd bought out the other partners and rebranded the space, which includes a photography studio and multimedia-wired conference room among its offerings.

Invent lists more than 50 members, including “a mix of entrepreneurs, startups, professionals, freelancers, and remote employees,” said Patty Reed at the front desk of Invent.

Hendren said The Office: Co-working at Gateway’s 30 co-working tenants come from as far away as Whidbey Island and British Columbia, and often they need an office space just several days a month. “We have a landscaper who needs a place to do his bookkeeping,” Hendren said. “We have Canadian-based companies whose employees cross the border to pick up mail (another major cost and time saver) and then do some work while they’re here. A woman who lives on Lummi Island comes here to get a reliable high-speed Internet connection.”

Other spaces specialize. Owner Alan McConchie at Localgroup Studio in Bellingham caters to a niche market. Its website states: “…dedicated to the practice, presentation, and discussion of design in its many forms.” McConchie said they attract writers, coders, students, telecommuters, and owners of small startup businesses.

Growth in co-working puts Bellingham in the U.S. mainstream of a young and burgeoning industry. Statista.com reports there were 4,043 co-working spaces in the United States in 2017 and that number is forecasted to increase more than 50% to 6,219 in 2022.

People who can work remotely as employees or independent contractors have the freedom to live where they want, but still need to be more productive than telecommuting from home.

Co-working spaces often provide the structure and discipline that many independent workers need for effectiveness. They don’t have distractions like pets, daytime television, or a neighboring conversation about someone’s social life. A co-working space is a place where an individual can go daily, sit down at a desk, and work among like-minded people in a structured atmosphere.

“People are realizing how important the environment they work in is and how difficult it is to work in a coffee shop,” McConchie said. Or, in the case of one co-working tenant who spoke to us anonymously, sit in the car outside a coffee shop to gain Internet access.

Interaction with like-minded people can be positive—peas in a pod, so to speak. According to a study featured on Office Vibe, a co-working office environment made 64% of entrepreneurs more productive, 68% more focused, and 90% more confident.

Reed said, “We have one client who said they get more done in three hours at Invent than in 10 hours at home.”

Lowering office leasing costs still ranks as the most major of draws to renting co-working spaces. Rates in Bellingham range from approximately $100–$300 monthly in modern, attractive buildings with preferred locations, while standard office rentals typically start around $400 a month and go up as high as $1,000, depending on size, location, services, and amenities.

Jeremy Raughton, Office Manager alongside Hendren at The Office: Co-working at Gateway, pointed out that many tenants utilize access to a shared conference room that enables them to meet with clients in a professional and private setting.

Co-working space rates vary, based on factors of access, privacy, and use of a shared conference room. For example, Invent Co-working lists packages ranging, per person, from a Virtual use only at $50 monthly up through $150 for first-come-first-served open desk, and $200 to throw in some conference room time. A dedicated desk and five hours of conference room come with packages ranging from the minimum $300 package to $450 for a cube, and from $600-$1,000 for an office.

Monthly rates are similar at the Bellingham co-working spaces. At the Gateway Centre, for example, they show two floors of a multitude of executive offices going between $600-$975. Another common denominator is hourly fees for needs like a meeting room, photo/video studio, virtual access, etc.

The Cooler in Bellingham includes a modern, eat-in kitchen.

The Pond emphasizes healthy amenities that include natural ventilation, full-spectrum daylighting, large windows, and solar tubes, plus a pet-friendly environment.

Co-working enthusiasts also enjoy the networking that occurs with people both in related and unrelated fields. Common areas in shared office spaces often are ideal for networking, sharing information and knowledge with fellow co-workers.

Unlike working at home, co-workers have an opportunity to interact with people from varying professional backgrounds, who would likely become a useful connection, and this—in turn—can be converted into generating leads and partnership opportunities. “A lot of happens organically from people working next to each other,” Reed said.

The advantages of this trend and its popularity nationally and locally probably foreshadow more co-working space “popping up” hereabouts. “Bellingham is ideal for co-working spaces,” McConchie said, “because it’s such a desirable place to live.”

Marketing your business in times of crisis

Adapting to the “New Norm”

We are the ONLY source of business news in Whatcom County! Since 1975, Business Pulse has informed Whatcom County on issues of concern to the business community, shared annual Top 100 lists and recognized local business leaders committed to creating a vibrant economy.
© 2020 - 2020 Business Pulse