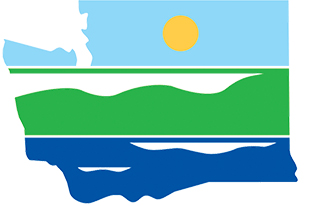 Hans Wolfisberg grew up in Switzerland, but when he came to Whatcom County in 1996 he felt he had found a true home. He purchased a dairy farm just outside of Lynden, with 60 acres of land right on the Nooksack River. There he began Edelweiss Dairy, an organic dairy with about 150 doe-eyed Jersey cows.

Organic dairy farmers must graze their cows on grass during the Summer months. To maintain enough grass for his cows in those dry months, Hans irrigated his fields. The water came from a well, with what might be called “provisional” water right under a long-standing application on file.

Enter the Department of Ecology (DOE), the state agency charged with managing water rights. From the early 1970s forward, Ecology staff has allowed farmers use of well water for irrigation, with the promise that a fully legal water right would be provided later. Years later, many farmers still are waiting for DOE to fulfill that promise. And today, as water rights are increasingly in political crossfire, farmers like Wolfisberg have grown more and more concerned.

While Hans was irrigating last year, an unofficial “inspector” cruised down the Nooksack River looking for potential water-rights violators. The “inspector” incorrectly (according to records on file) reported to the State that Hans was illegally withdrawing water from the river. Hans reassured the Ecology staff, who subsequently visited him about that report, that he did not draw from the river; rather, he pointed out, he only used his well, as he always had since he bought the property 22 years earlier. This year, Hans received notice that he did not have a legal water right and that he was to stop irrigating from his well immediately.

This was devastating news. He not only had to buy expensive hay to feed his cows, he stood to lose his organic certification. Without grass, his cows couldn’t graze.

Farmers appreciate Ecology’s constructive work with farmers on these issues. But this action shows that political and legal pressure on Ecology appears to be mounting, with potentially disastrous results. Despite claims by a few activists who say we have a water crisis, our aquifer in Whatcom County is filled to overflowing every year.

We farmers now understand that if the water in the river or streams gets too low, it can harm fish through increased temperature or interference with spawning. Farm leaders have been working with Ecology, and tribal leaders, and others for the last 25 years to address water issues constructively, with positive gains. And many farmers have converted their initial rights to draw from the Nooksack and streams into groundwater rights.

This has been made more difficult by ill-considered court decisions such, as Foster vs. Ecology. Lacking scientific justification and contrary to Ecology’s position, the Washington Supreme Court declared that removing even one molecule of water from the ground is the same as removing it from the stream or river. This means even groundwater use can run afoul of Ecology’s imposed in-stream flow rules.

The power politics of water rang clearly in the Hirst decision, prompted by the antigrowth activism of FutureWise. Without adequate scientific basis, the Washington Supreme Court allowed no further withdrawals from our massive aquifer without verification that a well would not harm fish habitat in any way.

In the last legislative session, aggressive lobbying successfully secured sizeable funding, with directions to DOE to enforce existing water rights. Even if this action is not directly aimed at farmers, the unintended consequences raise considerable concerns.

What happened to Hans Wolfisberg could become a common and devastating story for farmers in Whatcom County and beyond.

Marty Maberry, co-owner of Maberry Packing in Lynden, is a long-time farm leader who has been directly involved in resolving water issues since 1993.