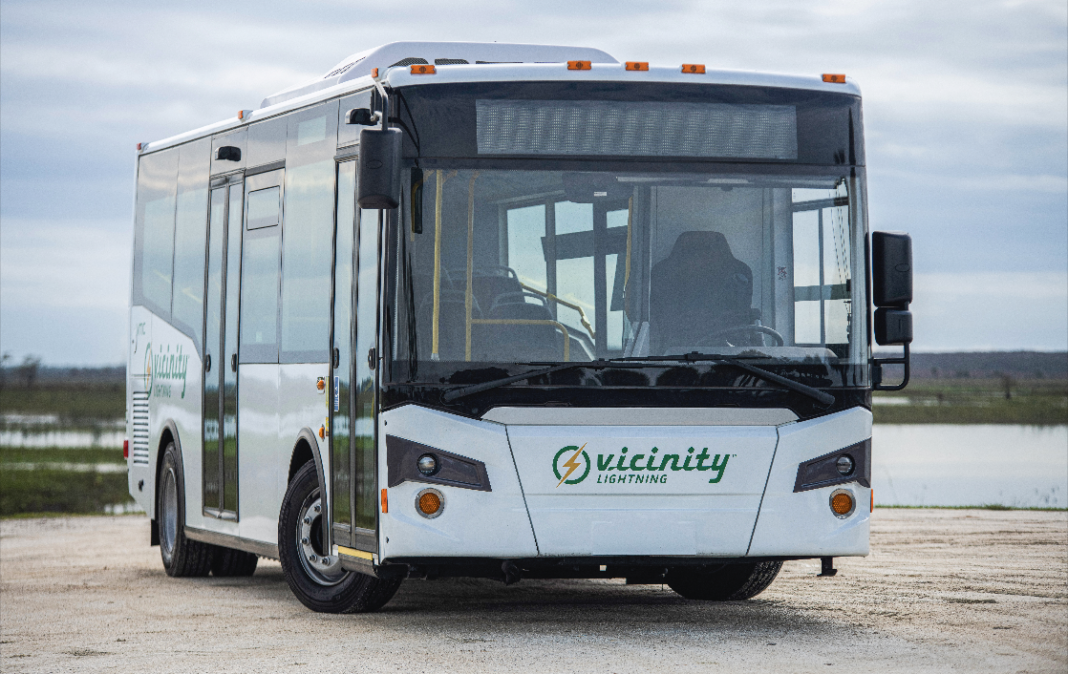 Transportation accounts for about 29% of the country’s total greenhouse gas emissions, according to the United States Environmental Protection Agency, making transportation the largest single contributor. Electric vehicles have the potential to drastically cut those carbon emissions almost overnight. This has resulted in an incredible increase in demand for EVs as the country attempts to shift toward more climate-friendly practices, especially in commercial, municipal and public transportation vehicles.

That’s one reason Washington state, Whatcom County and the City of Ferndale have welcomed the recent expansion of Vicinity Motor Corporation. VMC broke ground in Ferndale in July 2021 on a new vehicle assembly facility that complies with the Federal Transit Administration’s Buy America initiative.

“We’re currently selling our Vicinity line of buses and truck models across Canada and the U.S., and we’re excited to accelerate this growth with our own manufacturing facility in Washington,” said John LaGourgue, VMC’s vice president of sales and corporate development. “It’s a big market, and we’re planning to scale quickly to deliver up to 1,000 vehicles a year.”

Serving a country aiming for zero emissions
The federal government and several states are making efforts to set hard target dates by which vehicles sold must have no emissions. California Gov. Gavin Newsom announced in September 2021 that California would require all new cars and passenger trucks sold in the state to be zero-emission vehicles by 2035. Here in Washington, the Clean Cars 2030 bill passed both houses of the Legislature but was vetoed by Gov. Jay Inslee because the bill was tied to a road usage charge program that was not yet fully developed.

Governor Inslee backed up that statement when he attended the groundbreaking of VMC’s new Ferndale facility in July. In addition, the Washington State Department of Commerce awarded the Regional Economic Partnership at the Port of Bellingham a $300,000 economic development strategic reserve fund grant to assist VMC in building its new assembly facility.

At the federal level, the Biden administration also has been working on implementing new policies that would lower carbon emissions in every state. In April 2021, President Biden announced a new target for the U.S. to achieve, by 2030, a 50-52% reduction from 2005 levels in economy-wide net greenhouse gas pollution. A transition to electric vehicles is integral to that goal.

VMC has been pleased with the warm reception thus far.

“We’ve met and received support from Whatcom Community College and Bellingham Technical College, both of which have educational and training programs for their students that will be a great fit for our future employees and have offered a job fair when we’re ready,” LaGourgue said. “We’re looking forward to these types of collaborations, where we’ll offer internships, mentorship and class tours. Some of those students will become VMC employees. We’ve had equally positive experiences with our Realtor, who arranged introductions in Whatcom County. VMC has been extremely welcomed into the community, which has made this whole process go more smoothly than we could have anticipated.”
Though EVs still emit carbon emissions through the manufacturing process and, in some states, from the fossil fuels used to generate the electricity they need to recharge, officials hope that the enhanced energy efficiency will result in significant emission reductions. A 2015 study from the Union of Concerned Scientists states that, in the U.S., EVs generate half or less than half of the emissions of comparable gasoline-powered cars, from manufacturing to disposal. That ratio should only improve as battery technology and energy-efficient manufacturing improve.

From humble roots to global climate solutions
VMC got its start in 2008 as Grande West Transportation Group under the guidance of William Trainer, the company’s founder and chief executive officer.

“We originally partnered with B.C. Transit to develop a purpose-built, mid-size, heavy-duty bus for transit and community shuttles,” LaGourgue said. “Although the vehicle has evolved, it’s now in use all across Canada and the U.S.”

The approximately 35 employees on the Canadian VMC team have delivered more than 800 transit buses since 2013, helping VMC become the dominant Canadian supplier in the mid-sized bus market.

Currently under construction, the Ferndale facility will include a 58,000-square-foot commercial building and an adjacent 5,800-square-foot accessory building on a previously vacant site off Ferndale’s LaBounty Drive, near Interstate 5. The company will start by assembling the VMC 1200 there but is building with expansion in mind to accommodate the production of other lines in the near future — including Buy America-compliant electric, CNG, gas and clean diesel units across all sizes and powertrains — to meet growing U.S. demand.

“We anticipate adding about 30 new employees in a range of job categories initially and have already hired our facility production manager,” LaGourgue said. “As we’re able to get the production lines and facilities up and running, that number could eventually grow to 300 U.S. employees.”

Rather than competing with larger companies already dominating some sectors of the U.S. EV market, VMC is focused on filling the mid-size niche.

“Our VMC 1200 is a fully electric, cabover chassis, class 3 truck,” LaGourgue said. “We can put whatever type of box on the back that the customer wants. We’ll produce the chassis and power train, and we’ve partnered with market leader EAVX and JB Poindexter business units like Morgan, Morgan Olson and Reading that will provide whatever configuration the customer needs for the box portion, so customers get a complete product.”

Each will be powered by state-of-the-art lithium-ion battery technology that gives the VMC 1200 up to 150 miles of range on a single charge, good for a variety of urban settings.
As public transit authorities transition to fully electric fleets, VMC anticipates great demand in the U.S. for its Vicinity Lightning EV electric bus.

“Customers really appreciate the Lightning EV because it’s a little smaller and narrower, at 28 feet, compared to a traditional 40-foot bus,” LaGourgue said. “That makes it a better fit for city streets and residential neighborhoods, and especially medium and smaller cities where the larger buses just don’t make sense.”

VMC EV vehicles are more affordable, efficient and durable than many competitors because of the company’s approach to manufacturing, LaGourgue said.

“Many of our competitors make an EV by taking their traditional design, internal-combustion-powered model, removing the existing power train and adding in the battery and other EV parts,” he said. “We have purpose-built the Vicinity Lightning EV from the ground up, using proven automotive technology, bringing the vehicle to the customer at a very attractive total cost of ownership.”

EVs tend to have cheaper fuel and maintenance costs and, in some states, qualify for tax credits and incentives. VMC’s EVs also are appealing to smaller municipalities that can’t afford expensive charging infrastructure. The company’s EVs in classes 3 through 6 are equipped with an onboard charger capable of charging with industry-standard single-phase 240-volt power.

Preparing for the U.S. market
“We’ve partnered with Faber Construction and have had a very positive experience with the owners, the Faber family,” LaGourgue said. “They had the location, and it is an excellent fit. We’ve designed the facility with flexibility and future expansion in mind, both on the property and possibly to adjacent sites. We will be operational in Q2 of this year.”
The location offers easy access to port, rail and truck shipping and receiving facilities. Operations at the new facility will include Buy America-compliant assembly, pre-delivery inspections, research and development, as well as general technical work and servicing. “The Buy America program is meant to ensure that federal funds provided to states and municipalities for larger purchases are spent on American-made products,” explains LaGourgue. “We ensure that more than 70% of the materials are sourced from the U.S., as required by the program.”

Vicinity has a second Buy-America-compliant facility in Elkhart, Indiana, that, through a partnership with Optimal EV, will begin shipping up to 6,000 VMC Optimal E1 and S1 EVs per year, with their first units shipping in the first quarter of 2022.

The transaction doesn’t end when the vehicle is sold. VMC stays connected to its customers. “We also support our customers in order to keep the vehicles in service throughout their life, through parts and service and warranty as needed,” adds LaGourgue. “Buyers will also fly in and stay locally to complete their pre-delivery inspections before we ship their new vehicles to go into service.”

Thankfully, supply chain issues haven’t slowed VMC’s pace toward its goal thus far. “We’ve pre-ordered all the parts and materials for the facility. Faber Construction is well ahead of the supply chain curve,” says LaGourgue. “There are always little challenges along the way that may or may not happen, but it’s going well, and we’re on track and on budget.”
VMC is looking forward to continuing to develop new connections and partnerships in Whatcom County and the U.S. Management forecasts that 71% of 2022 sales will be attributed to EVs, rising to 88% in 2023. “I need to stop referring to us as a small company,” adds LaGourgue. “We’ve managed to grow quite a bit, and we’re excited to build relationships here in Ferndale and around the country to meet demand with our high-quality products.”

Those interested in learning more, or joining the U.S. VMC team, can visit https://vicinitymotorcorp.com/. ■