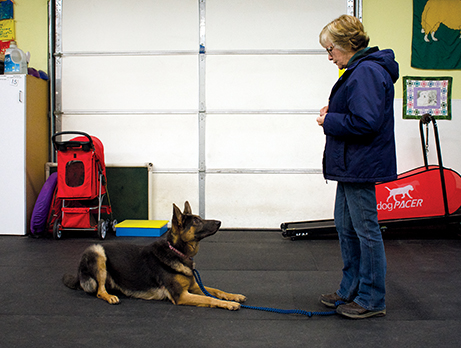 Brigadoon Service Dogs Give People In Need a Second Chance

Playing fetch is one thing. But Brigadoon Service Dogs, a local nonprofit, trains their dogs to another level.

Brigadoon’s dogs—which take about two years to train far beyond fetch, bring it, sit, and stay—alert their owners when their blood sugar drops too low, alleviate anxiety and PTSD for prison inmates and veterans (going so far as to wake them from nightmares and nudge them if they sense anxiety), help build confidence and self-worth with at-risk youth, and help mentally and physically disabled people live independently.

“I had no idea the impact my dogs would make,” said Denise Costanten, Executive Director of Brigadoon Service Dogs. Costanten, who founded Brigadoon in 2004, when she realized her Collie-training hobby could help people in need.

Once her website went live, she discovered how much the demand exceeded supply and she made Brigadoon a full-time career. She’s provided training and placed about 100 dogs in the last 14 years.

Brigadoon has three employees, about 40 volunteers, and programs that reach veterans, inmates, at-risk youth, and children and adults with mental and physical disabilities. The Brigadoon Prison Program, which operates in four Washington correctional facilities, teaches inmates to train service dogs for veterans; a few of the programs are specifically designed for incarcerated veterans.

That program teaches inmates positive communication skills and discipline, and helps them give back to the community. According to one Prison Program member, who served four years as a U.S.Army medic, “[The program] has brought a lot of light into my life. I’ve been able to identify some weaknesses in my teamwork skills and some personal weaknesses I’ll have to work on before my release. It has allowed me to put something before myself.”

Costanten said training dogs gives inmates and veterans someone to talk to. “One of the biggest problems for people with mental-health issues is they don’t want to be judged, and dogs don’t judge,” she said. “Their dogs love them 24/7—this gives people the confidence to go back out into the world.”

Each dog costs about $30,000 to train—including medical bills, food, staff time, etc. Civilians pay $10,000 for a dog and veterans get them for free. If a dog doesn’t pass the training requirements, Brigadoon adopts it out to a forever home for $500.

Costanten spends so much of her time training dogs that she has very little time to promote her organization and build relationships. “It’s the business community that helps spread the word about Brigadoon,” she said.

Brigadoon’s business partnerships with Superfeet and Northshore Veterinary Clinic have made a major impact on the nonprofit’s success, particularly since Brigadoon is reliant on private and corporate donations to stay afloat. Northshore helps promote fund-raising events and tours, and it gives Brigadoon a 20% discount on all veterinary costs.

Superfeet, which has supported Brigadoon financially since 2015, invited them to Superfeet’s annual Employee Giving Fair last year. At the Fair, Superfeet employees receive $500 each to donate to a nonprofit of their choice, and some Brigadoon’s service dogs “stole our hearts,” said Jolene McEachran, Superfeet’s Operations Coordination Manager and head of their Local Giving Committee.

“We chose to partner with Brigadoon because its mission and work positively impact those who come in contact with them,” McEachran said. “Since 2015 we’ve been a part of five matches (of dogs to owners in need).”

Costanten didn’t take a salary from this venture for 13 years, but she felt forced to when her late husband (an Army veteran with two Purple Hearts) was diagnosed with cancer and she no longer had an income source. Aside from a salary, Costanten has been recognized in other ways.