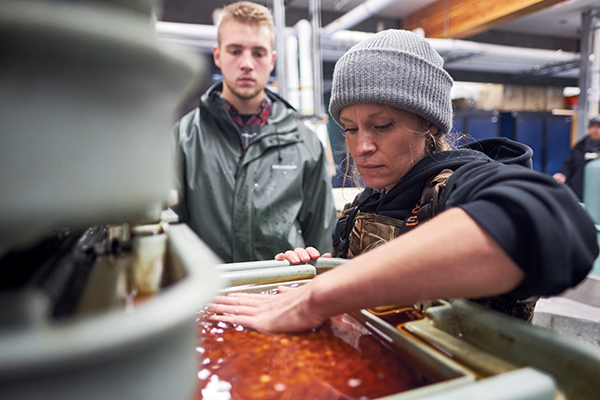 Doug Thomas, President and CEO of Bellingham Cold Storage, chairs the new Whatcom Creek Hatchery Improvement Committee. He brought stakeholders together in 2016 to discuss solutions for increasing fish population in an environmentally sustainable way. After meeting once a month for two years, this group is advocating for a new Whatcom Creek hatchery.

“Why reinvent the wheel? Let’s take the best-in-class practices from Alaska and try them here in Whatcom Creek. Everyone seems in favor of it.

We’re all trying to bring back the fish population.”

It would serve as a state pilot project, patterned after the Douglas Island Pink and Chum (DIPAC) hatchery in Juneau, Alaska—one of the most successful hatcheries in the world. “Why reinvent the wheel?” Thomas said. “Let’s take the best-in-class practices from Alaska and try them here in Whatcom Creek. Everyone seems in favor of it. We’re all trying to bring back the fish population.”

That achievement would have a major trickle-down effect on the local economy, impacting commercial fisheries, sport fishermen, packaging and storage companies, whale-watching tours, boating repair and storage, and more. Thomas said that the Washington Dept. of Fish & Wildlife, local governments, and the Lummi Nation support the project.

Owner Mark Riedesel at Barlean’s Fishery said, “We’ve seen our working waterfront shrink bit-by-bit every year. A new hatchery releasing up to 17 million salmon smolts yearly would create a true bright spot in our fishing-related community.” Riedesel serves as president of Bellingham Puget Sound Anglers, sits on the Hatchery Committee, and is an advisor to the Washington Department of Fish and Wildlife’s Puget Sound Recreational Fisheries Enhancement Committee. “A hatchery of this magnitude,” he said, “has the potential to create more jobs within the commercial sector of the fishing industry and to benefit the recreational business. It’s a true win for all user groups.”

The new hatchery could be a major boon for tourism, too. Hatchery committee member Sandy Ward, President and CEO of Bellingham Whatcom County Tourism, said the hatchery could provide a great educational opportunity about the life cycle of salmon. “Couple this with the chance to enjoy fresh seafood at some of the best farm-to-table restaurants in the Pacific Northwest,” Ward said, “and we have the recipe that will get visitors to spend an extra day or night in Bellingham and Whatcom County and generate additional visitor spending.”

The hatchery plan is in line with Governor Jay Inslee’s initiative to restore Washington’s dwindling orca population, since salmon are orcas’ primary food source. “By assisting in efforts to save the whales, hatchery jobs also help the tourism and conservation sectors,” Palm-Flawd said.

A cost-recovery program would fund the hatchery’s ongoing operations by requiring fishermen to pay a percentage of their catch’s value and thereby decrease government spending on the project.

The next step in the process: obtain financing to conduct a feasibility study. Once the hatchery is built (still several years out), Thomas said, it will take several years to see results as stronger fish populations slowly increase. “But even a small increase would make a huge impact,” he said.

If 10 million fish were released into the water with a 1.5% survival rate, then just 150,000 would return. If survival increased to Alaska levels (about 3%), that would double the fish population. While the increase might sound small, it could make a huge difference to the local economy.

“This much-needed hatchery can make a difference and point us in a positive direction,” Riedesel said. “Whales, commercial fishermen, recreational fishermen, business owners, and many others will benefit.”

“How much would a proposed Whatcom Creek salmon hatchery impact the local economy?”

Business: “From a business perspective, a new hatchery would create an opportunity for more salmon to be available both commercially and for the recreational community to harvest. This type of hatchery would also help alleviate impacts on local salmon stocks of concern. What those positives equate to from the business side of things, is it would allow for more local fish to be harvested and purchased, at a reasonable price, and we can then pass those savings on to all of our customers. What’s really important to remember is that this can all be done while being respectful of wild stocks of concern.”

Tourism: “We know that visitors from around the world are looking for experiences that are unique and authentic. Having the hatchery open to visitors and locals alike would provide an opportunity for Bellingham and Whatcom County to showcase our sense of community, natural resources, history (including the Lummi Nation and Nooksack Tribe), and how critical protecting the future of our fisheries has become.”

Higher Education: “There definitely are positive impacts for the program and its students. As a technical program that focuses on hands-on training, this provides another educational resource for the students (on-site training, internship opportunities, access to different operational systems, etc.) and local employment opportunities for our graduates… By increasing the number of hatcheries, you not only provide hatchery jobs (direct) but also associated jobs (indirect).”