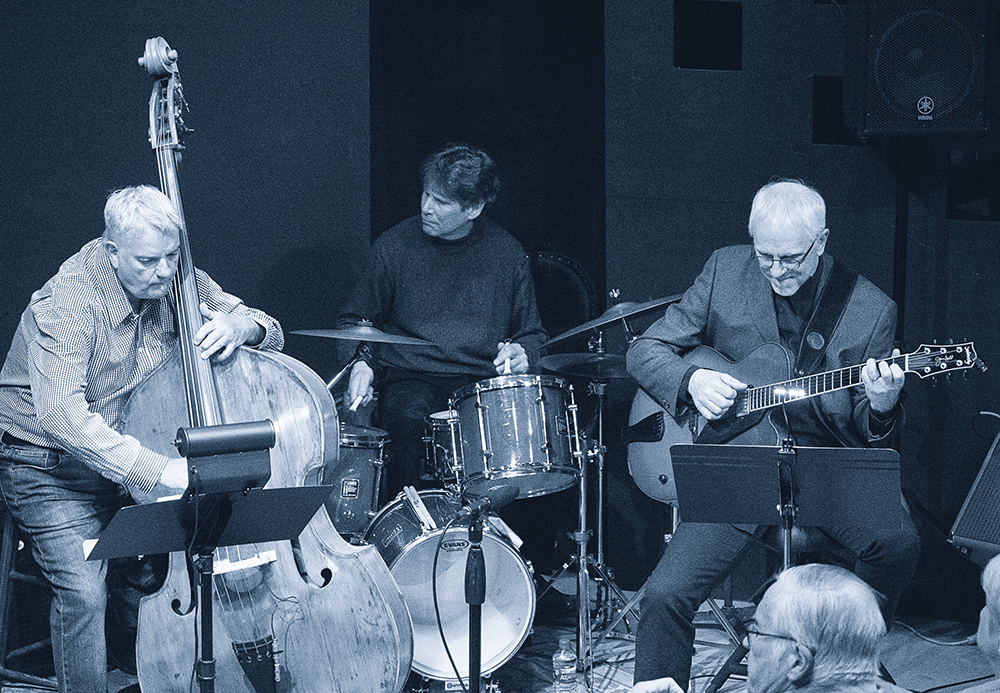 Jud Sherwood, a professional drummer and jazz musician, was having what he called “a very bad day.” He was sitting at Boundary Bay Brewery when he heard “the worst jazz band ever” from around the corner in the room. He became so incensed about the music, he got up from his table, rounded the corner, and was shocked to see who was performing: Out of the Ashes, a music-therapy jazz band for children and adults with disabilities.

“If everything about jazz is improvisation, then Out of the Ashes is total improvisation—they’re jazz at its most extreme,” Sherwood said.

He fell in love with the group. So much so that, about five years ago, he incorporated the program into his non-profit, The Jazz Project.

Sherwood founded The Jazz Project in Bellingham 21 years ago to support local jazz musicians, and he’s supported jazz groups, like Out of the Ashes, ever since.

Sherwood grew up in Bellingham and was a counselor for 10 years before quitting his day job to become a full-time jazz musician. “My main focus is making sure professional musicians get taken care of because, so often, they get left behind and can’t quit their day job, like I did,” Sherwood said.

The Jazz Project hosts a remarkable 150 to 200 events a year. Its biggest events (which sometimes feature Sherwood’s band, the Jud Sherwood Trio) include:

• The Art of Jazz Series, offered January through May and September through November at various Bellingham locations;

• Jazz Project Jazz Jam every Thursday at Illuminati Brewing Company in Bellingham; and

These events not only offer fundraising opportunities to keep the non-profit afloat, the ticket sales also go toward paying the musicians, so they can sustain a professional music career.

The Jazz Project also founded and supports the Youth Jazz Band—which comprises 18 to 40 students from 11 school districts across Whatcom County. The Youth Jazz Band plays about 40 events a year at senior centers, assisted living centers, and other community centers. The program helps prepare students for professional music careers and brings music to some of the people who need it most.

“Music isn’t a luxury for a few, it should be a necessity for everyone,” Sherwood said.

The Jazz Project also offers two $1,000 jazz scholarships to Western Washington University. Sherwood’s hope is that the organization can support musicians early in life, throughout college, and later in life if they pursue music professionally.

The organization also refurbishes donated instruments and gives them to low-income children. Sherwood personally helped place more than 100 pianos donated by a Portland organization in a program he called, “The Piano Liberation Organization,” where people could “free a hostage piano.”

About 60% of the organization’s donations come from individuals—many of whom have supported the non-profit since the beginning. The rest of their funds come from corporations, including Boundary Bay Brewery, the Community Food Co-Op, Peoples Bank, and others, as well as ticket sales, government grants, and national endowments, like the National Endowment for the Arts.

Despite all of the events, programs, and fundraisers hosted by The Jazz Project, the non-profit only has two employees: Sherwood and Mark Kelly, who manages the Youth Jazz Band. Between running The Jazz Project, offering music lessons on the side, and still maintaining a professional music career, Sherwood stays busy, to say the least.

“I don’t have children because I have jazz musicians,” Sherwood said.