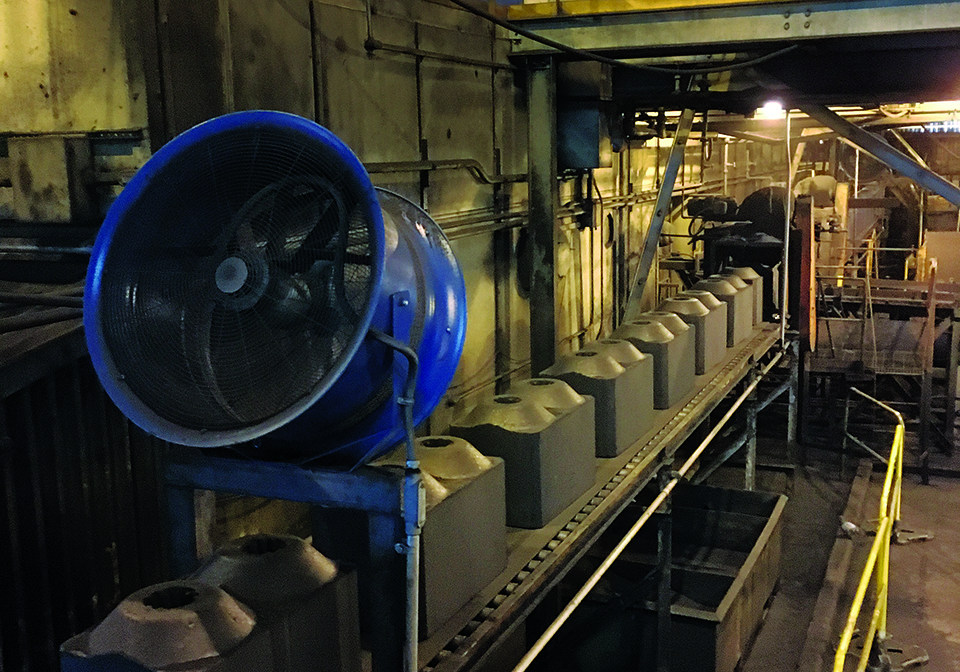 At our Intalco smelter in the United States, engineers developed a low-cost solution that eliminated water usage from the facility’s anode-cooling operation.”

This statement appeared on page 73 of Alcoa’s 2018 annual report, followed by a case study of the Intalco Works plant on the shores west of Ferndale in Whatcom County. The case arose from a 2015 edict by the State Department. of Ecology: Stop emitting contaminated wastewater into the ocean.

The solution at first appeared complicated, if even possible. Alcoa had two years to get it done. The smelter’s existing system of cooling down hot carbon anodes involved a filtering method that cleaned the water relatively well, but not completely, before it was discharged back to nature.

Last year, after staring at an estimated cost as high as $2 million, an engineering team came up with a simple solution: Stop using water for cooling; instead, use air-cooling fans. The savings: 40,000 gallons of water a day. The cost of the solution: under $10,000.

Clinton Harkey, who, at the time, was the only mechanical engineer at the smelter, led the experimentation. A Texas transplant with his degree from Texas Tech, he explained in a sit-down interview recently how this all came about. “Previously, the equipment pumped water through spray nozzles and filtered the used water. That removed large particles,” he said.

Without wading into too much tech-speak, Harkey explained how research at the Alcoa Technical Center eventually led to using room-air temperature and super-large fans to regulate the internal-anode temperatures. Yes, fans like you might use to cool a room in your house or your office (only giant industrial-sized) maintained the desired structural integrity of the anodes, without having to use the spray hoses to cool them.

Another benefit evolved from the change. Not only does the new process meet environmental requirements, it no longer produces cracked anodes from uneven temperatures.

“I reported how we could turn the water off altogether, and how we could add the forced-air, convective cooling fans and get to zero contamination,” Harkey said. “The deadline was June 30 of 2017. We destroyed that, converting the system by March.”

The Intalco innovation was reported as a case study in its worldwide annual report. Moreover, with the double-win—zero contamination and major cost savings—Alcoa also was recognized with an environmental best-practices award for its anode-forming and baking process.

At one point, Harkey said, the perception was that the task of eliminating wastewater in this uniquely old smelter, which includes a carbon plant, a pot line, and a casting house, was “impossible…we went from thinking it might cost millions, to a bid of $50,000 for a different watering system, and wound up spending less than $10,000 on two fans and some labor to move equipment,” he said.

The Intalco smelter, he said, is a “material-handling facility that happens to make metal in the process.” He explained in layman’s terms: “We move things around and recycle 90% of the materials we work with back into the process of producing aluminum. Most of the aluminum first produced is still in use.

“Producing aluminum, in and of itself, is a clean-production industry, built on recycling.” Harkey said. “We strive constantly to protect the environment. Our sole purpose is to make metal in the most environmentally friendly way possible. It’s hard because we’re a heavily regulated state and country, but because we are, we can do far better than other countries with no regulations.”

Beginning this year, Alcoa’s long-term goal—written in its annual report—is to define and implement a program enhancing water-use efficiency. The specific objectives: “…to reduce fresh-water intensity at least 25% by 2020, and 30% by 2030.” The company is taking a survey in November to assess the progress toward those goals.

Alcoa’s points of emphasis, as outlined in the annual report, are reduction of water consumption and discharge, use of secondary sources of water, and an increase in water recycling.

“Environmentally,” Harkey said, “this is a fun place to work.”