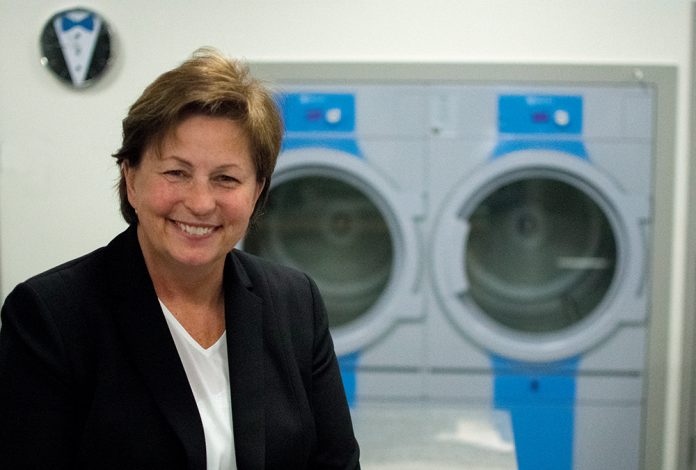 The vast majority of dry cleaners in the U.S. have used traditional dry-cleaning methods for more than 60 years—utilizing a chemical solvent to wash delicate clothes (yes, wash…dry cleaning is a misnomer) before tucking them away in individual plastic bags for pick-up by their owners.

Brio Cleaners uses state-of-the-art machines imported from Sweden, all-natural soaps and products, compostable apparel bags (as opposed to single-use plastic bags), and, according to the Brio website, products so safe that “…we can drink our solvent.”

This is a significant shift from most American dry cleaners, which—according to research from several sources—rely on Perchloroethylene, or “PERC,” a chemical solvent used to wash clothes in the traditional dry-cleaning process. (“Dry cleaning” isn’t “dry”—it just uses a solvent instead of water). According to the Environmental Protection Agency, PERC is a known health and environmental toxin and likely a human carcinogen.

Despite this, it’s been used across the country’s 28,000 dry cleaners for the last six decades. Wearing clothes washed with PERC doesn’t raise health concerns per se, but exposure to this chemical does through air, soil, or drinking water.

In 2007, California became the first state to ban PERC, ruling that dry cleaners must phase the chemical solvent out of their businesses by 2023. Stricter PERC restrictions were issued here in Washington during the Summer of 2019, with a caveat that the federal government is considering stricter restrictions or a ban that could be issued in 2021.

To circumvent the usage of PERC, Unema traveled to North Carolina to learn a new process called “wet cleaning” that uses water, special machines, and non-toxic solvents to produce the same results as traditional dry cleaning, but with a significantly smaller environmental impact.

“I was shocked when I studied the industry,” Unema said. “So I researched (worldwide) how to do this without the chemical load for my workers, the customer, and the environment. Laundry should not increase a person’s chemical load.”

Brio Cleaners is one of just three dry cleaners in North America that uses advanced Electrolux machines built in Sweden. While “green” machines like these have been used in large hotels and in other industries, such as cruise ships and at Disneyland, these machines are practically unheard of for small operations like Brio.

It’s so rare, in fact, that the president of Electrolux’s North American headquarters has visited Brio three times in the last year to help Unema get her business and machines up and running.

“When (traditional dry cleaners) started 60 years ago, it was okay to use PERC, but time and knowledge have advanced…so the industry must change,” Unema said. “We are just so far out in the lead, it hurts.” Unema said her business isn’t just cutting edge, it’s “bleeding edge.” The newness of her approach came with a hefty price tag (“it would curl your hair,” she said, declining to divulge the cost) and plenty of growing pains.

Unema purchased a former dry-cleaning company in June 2018, but an estimated three-month facelift turned into a year-long renovation, during which everything was stripped out of the old building—floors, walls, wiring, plumbing, roof. Everything.

While gutting their new facility, Unema established operations in Brio Cleaners out of a warehouse for nearly a year, training personnel and committing to maintain a strong environmental focus while their location was in limbo. “I’ve never worked so hard in my life,” Unema said.

Part of the renovation struggle centered around how outdated the dry-cleaning industry is. “We hired a contractor, but no one has built a dry cleaners in the last 30 years. It was all trial and error.”

After many ups and downs, Unema finally celebrated Brio Cleaners’ grand opening in its upgraded 3,000-square-foot facility on James Street in September 2019. Her long-term vision is to sell the business to someone who will grow it. “I’m a starter-upperer,” she said.

She’s built and documented the operations with impeccable detail so she can sell to someone who can immediately run with them, adhering to the non-toxic stewardship model in an industry mostly devoid of it.

Brio Cleaners has six employees, some part-time, but plans call for growing to eight soon. “I’m most proud of my employees,” Unema said. The team earns a retirement plan, competitive pay, and profit-sharing options as part of her business motto, “People, planet, profit.”

She concluded, “I value my people above all else. They, in turn, take care of our customers. It takes all of us to be mindful of taking care of our environment.”