Can the $1 billion renewable energy plant be saved?
Jeremy Lott

All crude oil that is extracted with drills and derricks was once biological material that got trapped under a sediment layer, pressed and heated for millions of years. That process slowly changed the former living material into today’s super fuel.

Tomorrow’s fuel may not take quite so long. Scientists are working with more recent organic material to jumpstart that oil creation process aboveground, in laboratories, in a few hours. Among their goals is finding better ways to power engines by cutting down on waste and carbon emissions.

One promising result of these new oil creation efforts is “renewable diesel.” Renewable diesel is not simply biodiesel (diesel fuel made from currently organic material such as fats, greases and feedstock) but rather is a further refinement of the process. In terms of video games, it might be seen as the next level up: harder but also more rewarding.

Joe Thompson, retired production specialist for the University of Idaho’s National Biodiesel Education Program, said that while biodiesel is much easier to make than renewable diesel, renewable diesel yields much higher energy content by refining oxygen out of the mix through a complex process.

The proposed Green Apple renewable diesel refinery promised to add upwards of 650 construction jobs to the county and 100 permanent jobs after that, for workers who have to keep the facility going and for many contracting jobs of various types. The plant’s expected full capacity was 250 million gallons per year, making it the West Coast’s largest renewable diesel refinery.

Kyle Zender is construction manag­er for Western Refinery Services. He created what he called a “very rough estimate” of what the project would have been worth to his company for the work they would have been responsible for. It clocked in at between $75 and $100 million, with jobs for 150 to 200 workers for 18 to 24 months.

Phillips 66 and Green Apple ap­peared committed to the project since its announcement. They jointly invest­ed “upwards of $20 million, in addition to Phillips 66 purchasing property for the project wetlands mitigation,” said Phillips 66 Cherry Point manager Jolie Rhinehart, who was helping to spearhead the new facility. And yet, the companies announced on Jan. 21 that they had decided to scrap Green Apple “due to permitting delays and uncertainties.”

The fallout—the cost ($75-$100 million), the jobs (150-200), and the time frame (18-24 months)—of this project’s cancellation has been consid­erable. New Whatcom County Exec­utive Satpal Sidhu told Business Pulse that he was surprised by the announce­ment and not at all happy about it.

Sidhu said that he and his staff had reached out to both energy companies to see whether the county can do any­thing to resolve the uncertainties.

State Sen. Doug Ericksen is the ranking Republican member of the Senate Environment, Energy and Technology Committee in Olympia. In a statement, Ferndale’s Ericksen called the project “of vital importance to Whatcom County and the working families of Northwest Washington.”

“We are working very hard to restart the Green Apple project,” the state­ment read. “We are working with the governor’s office and reaching out to other interested parties to establish a pathway forward. We will leave no stone unturned.”

That message was released on Jan. 23, two days after the cancellation an­nouncement. A week later, Erik Smith, senior public information officer for the Senate Republican Caucus, told Business Pulse that they haven’t found much under those stones yet.

“I don’t think there have been any developments in the last several days,” Smith said.

Mills Electric’s Huntley spoke of frustration over the delays that have put the project in jeopardy.

“It’s ridiculous not to get this ap­proved and on its way,” he said. “It’s ex­actly what everybody’s been asking for. We need to lower our carbon footprint and use renewable products.”

A renewable diesel plant holds out the promise of doing good and doing well all at once. Both environmental­ists and business owners agree that it’s a good thing, or at least better than the existing alternatives.

One fact sheet for the project ad­vertised a reduction in greenhouse gas emissions of 60%-80% and gave lo­cals a more concrete way of thinking about those numbers: “Offsets emis­sions equivalent to 5X the vehicles in Whatcom County.”

The real sticking point keeping the project from happening is something called an Environmental Impact Statement, and whether or not the Green Apple project needed one.

“Whatcom County process has not changed over the last decade for such large-scale projects,” Sidhu told Business Pulse. “There are other entities, like Department of Ecology, Army Corps of Engineers, tribal governments and other organizations, who also have their part in the permitting process.”

In this, the Whatcom County executive was echoing the influential environmental organization RE Sources for Sustainable Communities. RE Sources’ local manager Eddy Ury told the Bellingham Herald that the companies’ decision “doesn’t add up.”

In a statement, RE Sources said that state reviews are expected for projects like this one.

“Phillips 66 began this project with Renewable Energy Group in 2018 with full awareness that major projects like this are always required to go through the standard state review process,” the statement read.

However, there’s a big difference between going through a review process and waiting for an EIS, which can tack additional years onto a project.

“In the history of the Phillips 66 Ferndale Refinery, this is the first project that had ever been deemed ‘significant’ requiring the Environmental Impact Statement,” said Phillips 66’s Rhinehart.

Rhinehart explained that Phillips 66 and Renewable Energy Group “have spent the last 24-plus months completing the engineering and environmental evaluation to be certain we understood the environmental impact and mitigation options.” Their aim was to “build the cleanest, most efficient renewable diesel facility in the world,” Rhinehart said.

Had they known that an EIS was required, they would have acted differently, Rhinehart said. “We would have initiated it early last year and been within 12 months of our original schedule,” Rhinehart said. But since that did not happen, she said, the project is at risk of not being online until at least 2024, which is a problem for its competitiveness with other planned renewable diesel plants.

“Both Marathon and Valero have renewable diesel projects that started engineering around the same time as ours, but they decided to build in the Gulf Coast,” Rhinehart said. “They have both already received permits.”

She added that there was “no certainty that even with an approved permit, the project could successfully move forward without a lengthy appeal process,” because “every industrial project in this region similar to the magnitude of Green Apple has yet to complete an EIS and resolve the potential legal challenges so that the project could be constructed.”

Could the project be resuscitated? Yes, said Rhinehart, before adding a few big ifs.

“We need both certainty that our base business will not be compromised and an improvement in timing. This project was premised upon starting production in late 2022,” she said.

Any more than a few months later than that, she said, and the deal is still off.

Can Whatcom County and Olympia together speed up the regulatory process on this project to allow Green Apple to be built in time for it to be competitive? Mills Electric’s Huntley sure hopes so.

“It makes no sense at all to take so long in the permitting process,” he said.

Yet unless things change significantly, the Green Apple renewable diesel refinery simply won’t happen. Whatcom County will be out a billion-dollar project, and the proposed shrinking of the carbon footprint will have to happen somewhere else.

“We’re not giving up. We’re going to fight to make this work,” Sen. Ericksen pledged. “This is too important for us to let it go.”

New Ferndale mayor sees the city moving back to the future 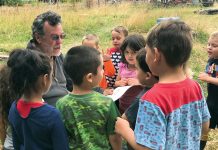 Since 1975, Business Pulse has kept Whatcom County residents informed about issues of concern to the business community and been in the forefront in recognizing our business leaders.
Contact us: info@businesspulse.com
©